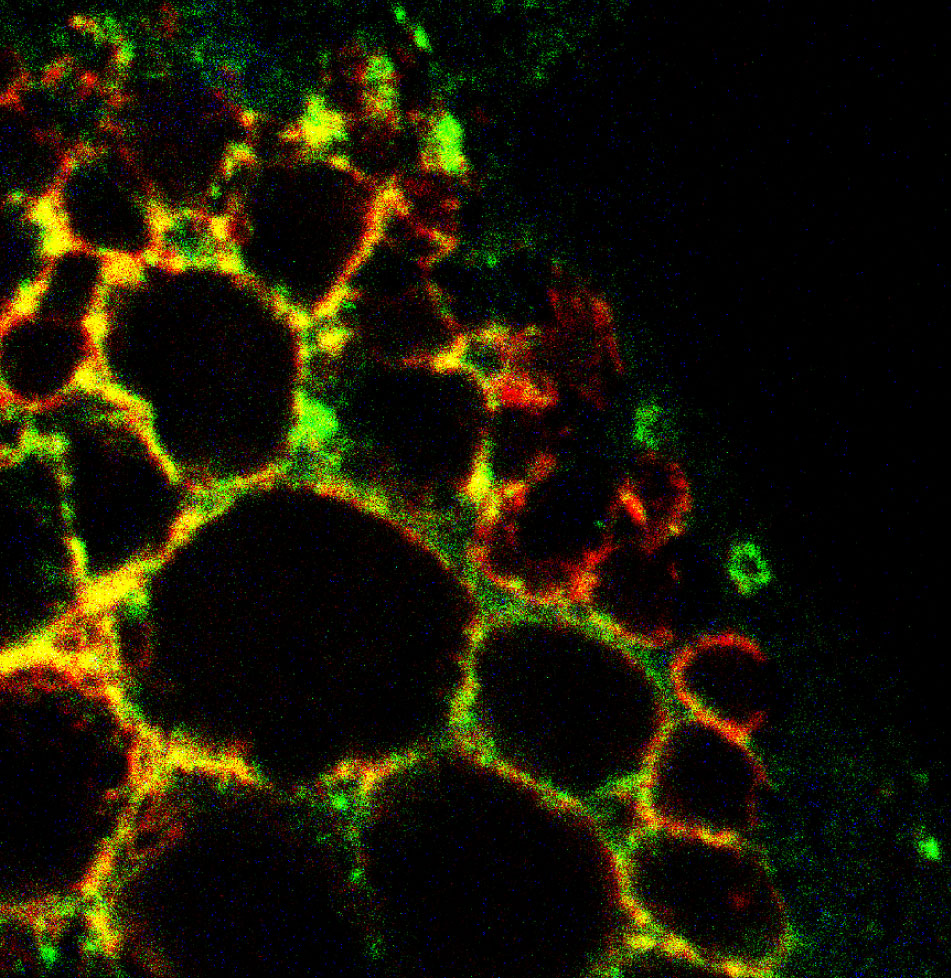 This microscope image shows many enlarged lysosomes inside a mouse skin cell. Lysosomes are the cell’s recycling centers. Image credit: Xiang Wang and Haoxing Xu, University of Michigan.ANN ARBOR—A University of Michigan cell biologist and his colleagues have identified a potential drug that speeds up trash removal from the cell’s recycling center, the lysosome.

The finding suggests a new way to treat rare inherited metabolic disorders such as Niemann-Pick disease and mucolipidosis Type IV, as well as more common neurodegenerative diseases like Alzheimer’s and Parkinson’s, said Haoxing Xu, who led a U-M team that reported its findings March 13 in the online, multidisciplinary journal Nature Communications.

“The implications are far-reaching,” said Xu, an assistant professor of molecular, cellular and developmental biology. “We have introduced a novel concept—a potential drug to increase clearance of cellular waste—that could have a big impact on medicine.”

Xu cautioned, however, that the studies are in the early, basic-research stage. Any drug that might result from the research is years away.

In cells, as in cities, disposing of garbage and recycling anything that can be reused is an essential service. In both city and cell, health problems can arise when the process breaks down.

Inside the trillions of cells that make up the human body, the job of chopping up and shipping worn-out cellular components falls to the lysosomes. The lysosomes—there are several hundred of them in each cell—use a variety of digestive enzymes to disassemble used-up proteins, fatty materials called lipids, and discarded chunks of cell membrane, among other things.

Once these materials are reduced to basic biological building blocks, the cargo is shipped out of the lysosome to be reassembled elsewhere into new cellular components.

The steady flow of the materials through and out of the lysosome, called vesicular trafficking, is essential for the health of the cell and the entire organism. If trafficking slows or stops, the result is a kind of lysosomal constipation that can cause or contribute to a variety of diseases, including a group of inherited metabolic disorders called lipid storage diseases. Niemann-Pick is one of them.

In previous studies, Xu and his colleagues showed that proper functioning of the lysosome depends, in part, on the timely flow of calcium ions through tiny, pore-like gateways in the lysosome’s surface membrane called calcium channels.

If the calcium channels get blocked, trafficking throughout the lysosome is disrupted and loads of cargo accumulate to unhealthy levels, swelling the lysosome to several times its normal size. 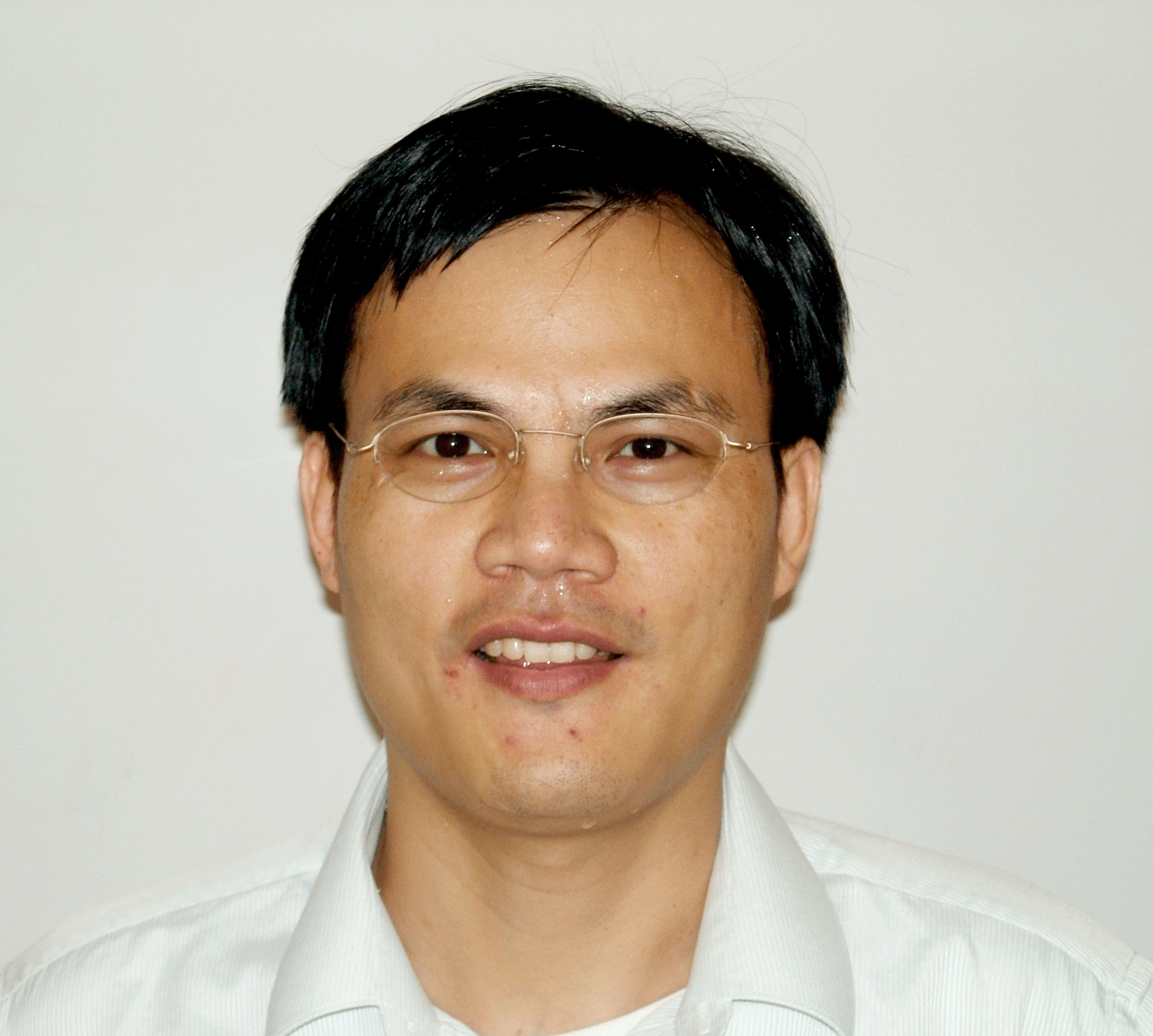 Haoxing Xu, assistant professor in the U-M Department of Molecular, Cellular and Developmental Biology. Photo courtesy of Haoxing Xu.Xu and his colleagues previously determined that a protein called TRPML1serves as the calcium channel in lysosomes and that a lipid known as PI(3,5)P2 opens and closes the gates of the channel. Human mutations in the gene responsible for making TRPML1 cause a 50 to 90 percent reduction in calcium channel activity.

In their latest work, aided by a new imaging method used to study calcium-ion release in the lysosome, Xu and his colleagues show that TRPML1-mediated calcium release is dramatically reduced in Niemann-Pick and mucolipidosis Type IV disease cells.

More importantly, they identify a synthetic small molecule, ML-SA1, that mimics the lipid PI(3,5)P2 and can activate the lysosome’s calcium channels, opening the gates and restoring the outward flow of calcium ions.

When ML-SA1 was introduced into mouse cells and human Niemann-Pick Type C cells donated by patients, the increased flow through the lysosome’s calcium channels was sufficient to speed trafficking and reduce lysosome storage.

Xu and his colleagues believe it might be possible to use ML-SA1 as a drug to activate lysosome calcium channels and restore normal lysosome function in lipid storage diseases like Niemann-Pick. The same approach might also be used to treat Alzheimer’s disease and Parkinson’s, neurodegenerative diseases that involve lysosome trafficking defects.

Such studies might also provide insights into the aging process, which involves the very slow decline in the lysosomes’ ability to chop up and recycle worn-out cellular parts.

“The idea is that for lysosome storage diseases, neurodegenerative diseases and aging, they’re all caused or worsened by very reduced or slow trafficking in the cellular recycling center,” Xu said.

Next step? The researchers hope to administer ML-SA1 to Niemann-Pick and mucolipidosis Type IV mice to determine if the molecule alleviates symptoms.

In Niemann-Pick disease, harmful quantities of lipids accumulate in the spleen, liver, lungs, bone marrow and brain. The disease has four related types. Type A, the most severe, occurs in early infancy and is characterized by an enlarged liver and spleen, swollen lymph nodes and profound brain damage by the age of 6 months. Children with this type rarely live beyond 18 months. There is currently no cure for Niemann-Pick disease.

The first author of the Nature Communications paper is Dongbiao Shen, a graduate student research assistant in the U-M Department of Molecular, Cellular and Developmental Biology.

The work was supported by grants from the National Institutes of Health and the ML4 Foundation.