PELLSTON, Mich.—University of Michigan wildlife ecologist Nyeema Harris and graduate student Corbin Kuntze are deep in the woods in the southeast corner of the U-M Biological Station, a 10,000-acre property at the northern tip of Michigan’s Lower Peninsula.

While Harris looks on, Kuntze crawls slowly on all fours, imitating a coyote or a bear while glancing at the flashing red light on a digital camera strapped to the base of a hemlock trunk.

“We call this the walk test,” Harris said. “We need to simulate various animals passing in front of the camera, to make sure it goes off when it’s supposed to and that we get the small ones as well as the bigger ones.”

The U-M Biological Station is one of three Michigan sites—the others are in the Upper Peninsula and at a wildlife refuge near Saginaw—where Harris’ team recently installed motion-triggered “camera traps” to capture snapshots of the state’s diverse wildlife. They’re mainly interested in carnivores, the meat eaters. 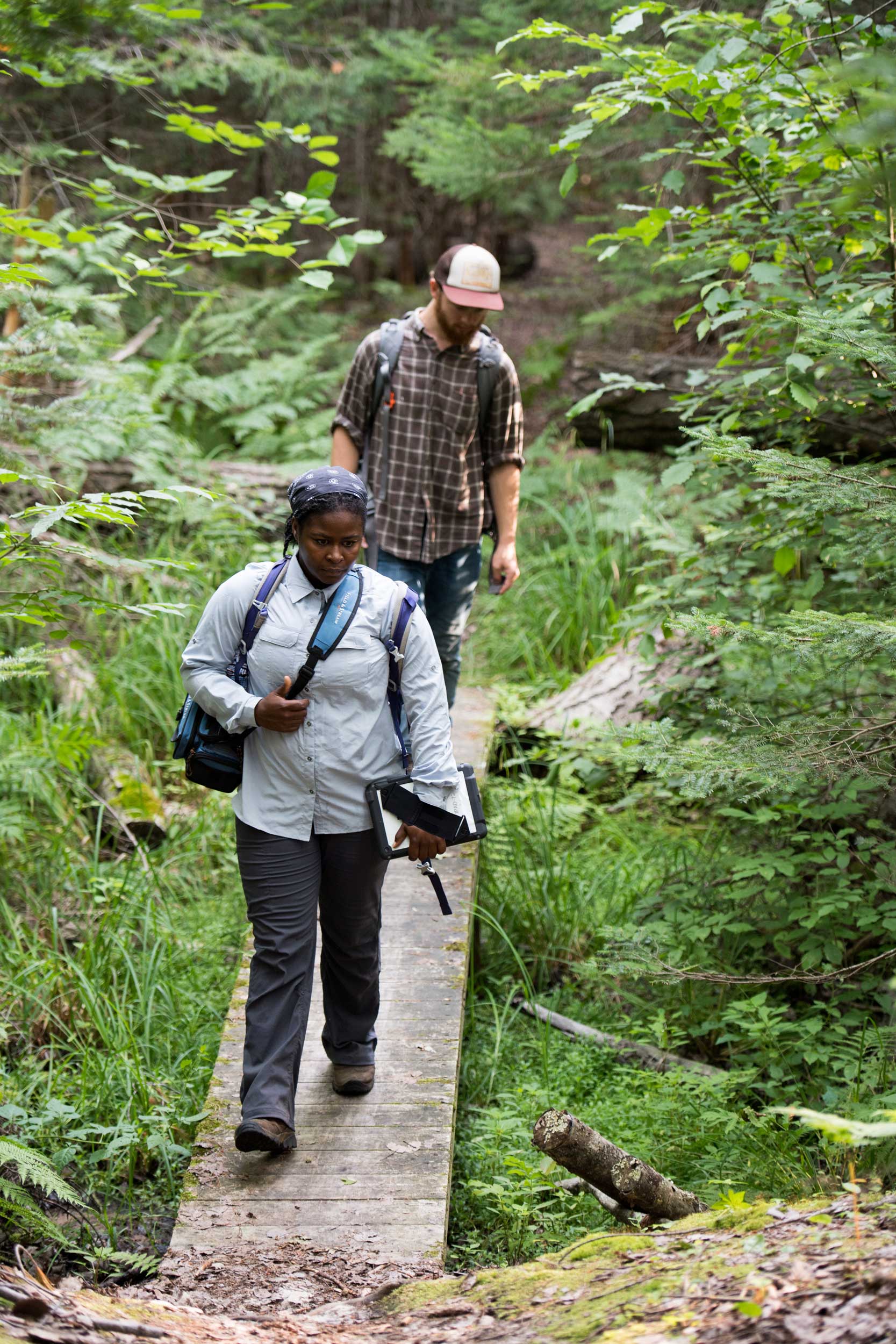 U-M wildlife ecologist Nyeema Harris and graduate student Corbin Kuntze heading into the forest at the University of Michigan Biological Station to install “camera traps” to capture wildlife images. The Biological Station is one of three Michigan sites in the study, which will yield hundreds of thousands of wildlife snapshots. Image credit: Eric Bronson, Michigan Photography

The three-site wildlife survey uses about 150 digital cameras that will yield hundreds of thousands of snapshots. A fourth site is planned for Detroit to track urban wildlife in city parks next summer.

It’s the largest-ever camera-trap study of Michigan wildlife, according to Harris.

To help identify all those animals, the researchers have enlisted the support of volunteer citizen scientists—including Michigan students of all ages—in a project called Michigan ZoomIN, which launched this month.

“It’s a massive field effort followed by a massive identification effort involving hundreds of thousands of images,” said Harris, an assistant professor in the U-M Department of Ecology and Evolutionary Biology who also conducts camera-trap studies in Africa. “So our citizen scientists will be a huge help to us, whether that person is an elementary school student in Detroit or a retired accountant in Montana.”

Specifically, the researchers want to know how the animals’ daily activity patterns, the types of habitats they use, their diet and even the parasites that plague them differ between locations. This data trove is expected to yield insights for wildlife management and conservation efforts now and in the future, as these animal populations shift in response to human-induced pressures such as urbanization and climate change.

The study, which also includes the collection and analysis of animal scat and hair fibers, will enable the researchers to revise outdated wildlife “range maps,” which show where various species are found in the state.

“Our first question is: Is the species there?” Harris said. “Before we can figure out what a coyote eats or what a raccoon eats, we need to confirm that those species are actually there. That’s what the camera traps allow us to do.

“We think we know exactly where these animals are in our state, but we don’t. These communities are dynamic, not static. Things are shifting and changing constantly.”

For example, the team’s survey at the Shiawassee National Wildlife Refuge near Saginaw has already detected bobcat. That location is outside the current distribution maps for the species.

“So doing an on-the-ground study gives you indisputable visual evidence confirming what species are there,” Harris said. “And the baseline we’re establishing today will help us think more clearly about how things might change in the future.”

Back in the woods at the Biological Station, U-M graduate student Kuntze is adjusting the height of a camera trap—about a foot off the ground is optimal, so that animals of all sizes are detected by the infrared beam that triggers the shutter.

A few of the cameras are equipped with transmitters that send photos directly to the researchers’ email inboxes in real time. But in most cases, the images are stored on tiny SD memory cards inside the waterproof, camo-patterned plastic camera boxes and must be retrieved periodically.

On a warm summer morning as thunderstorms approached from the west, Harris and Kuntze crashed through dense underbrush to install cameras every 500 meters along a transect through the forest just north of Burt Lake. A breeze rustled the treetops and birdsong rang out.

Harris and Kuntze look for games trails with fresh animal tracks and scat, preferably in high-traffic transition zones between vegetation types. This particular spot is at the boundary between a stately hemlock grove and a swampy thicket of low brush, ferns, scrawny conifers and downed, rotting tree trunks. 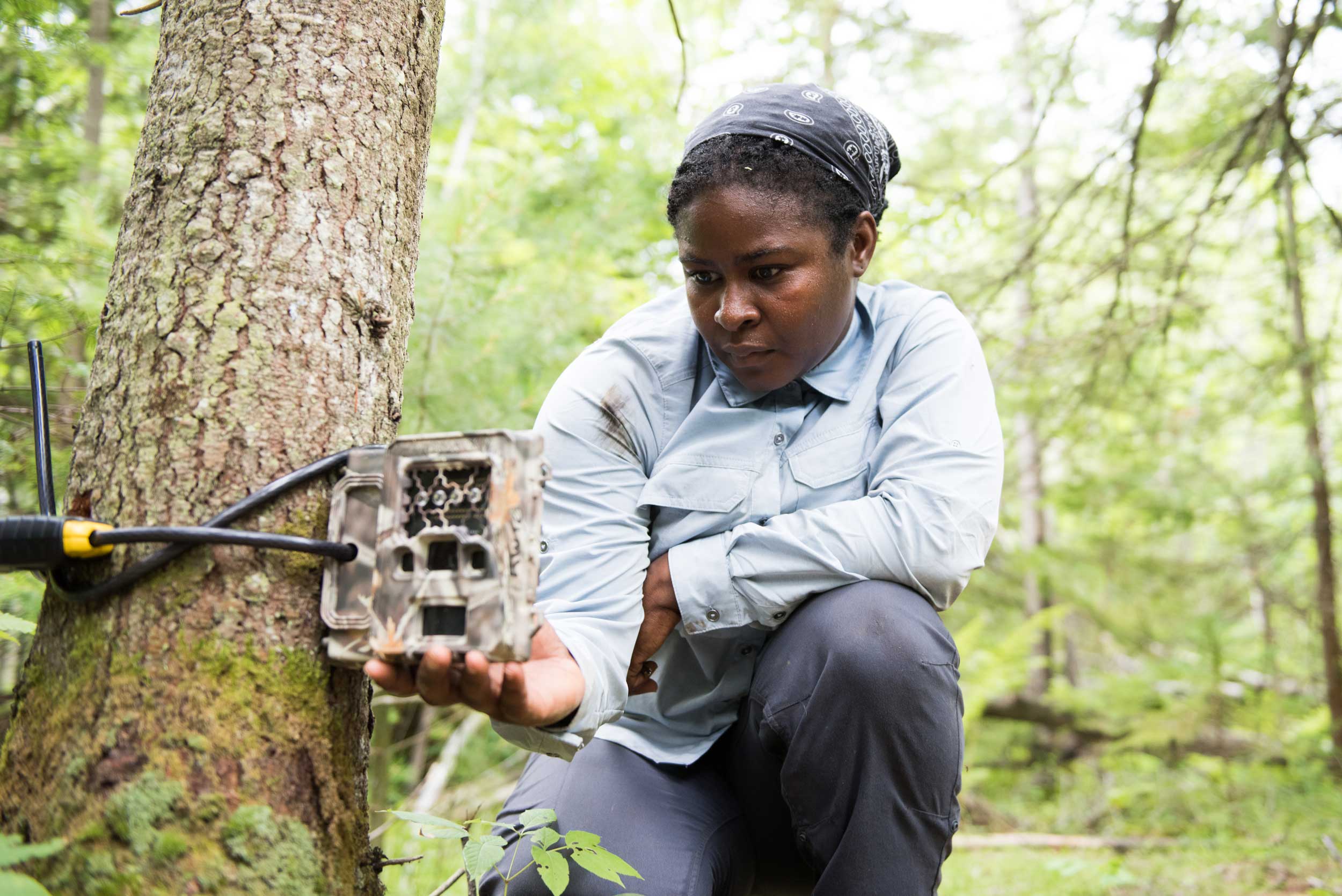 The camera is strapped to the base of a large tree with a locking cable. The researchers record its GPS coordinates on a waterproof tablet, take a photo for their records, and attach an identification tag. They do the “walk test” to verify that the camera’s triggering mechanism is working. Then it’s off to the next location 500 meters away.

Sixty cameras were installed in this manner at the Biological Station in fall 2015 and in the summer and fall of this year. Ninety-six were deployed at the remote Huron Mountain Club in the Upper Peninsula this summer and fall. The Shiawassee site was first surveyed last winter, with full deployment planned for next summer.

During a pilot study last year at the Biological Station, about 14,000 animal selfies were collected, and roughly 80 percent of the pictures were of deer. Though the U-M study is focused on carnivores, the researchers are also interested in the animals the meat-eaters eat, since predators play a critical ecological role in regulating prey populations.

The camera traps capture them all. At the Biological Station, the “prey items” include mice, chipmunks, squirrels, rabbits, opossums, porcupines and deer.

“When you first extract the SD card, it’s like Christmas when you pop it into the computer,” Kuntze said. “There’s this feeling of excitement that never really goes away after your first camera trap.”

And the biggest thrill is spotting a member of the scientific order Carnivora, which comes from the Latin words for “flesh” and “to devour.”

“When you hit that first coyote or that first bobcat or a bear, it’s really exciting,” he said. “It’s what we work for.”

Kuntze is using data from the camera-trap study for his master’s thesis in the U-M Department of Ecology and Evolutionary Biology, with Harris as his adviser. Each photo bears a date and time stamp, which allows Kuntze to study “temporal partitioning,” or how two carnivore species—say coyote and raccoon—use the same location at different times.

He’s also analyzing coyote scat to determine how the foods and intestinal parasites of these canids vary from place to place across the state.

“Working here at the Biological Station with Nyeema afforded me an excellent opportunity to delve in great depth into a subject I’m passionate about,” Kuntze said.

Another U-M graduate student working under Harris, Shawn Colborn, is using the camera-trap photos and scat samples for his master’s thesis in the Department of Ecology and Evolutionary Biology. He is studying variations in coyote diet and spatial use patterns.

Launched in November 2016, the Michigan ZoomIN project enlists students and other citizen scientists in the effort to identify hundreds of thousands of animal selfies. Following a 90-second online tutorial, the volunteers are presented with a series of animal photos. Species lists, animal descriptions and reference photographs are available to help guide them through the process.

“In the course of identifying the animals, they are learning about Michigan wildlife and the ecology and behavior of these animals,” Harris said. “So there is some level of reciprocity. They are learning in exchange for volunteering their time and helping us get the data we need.” 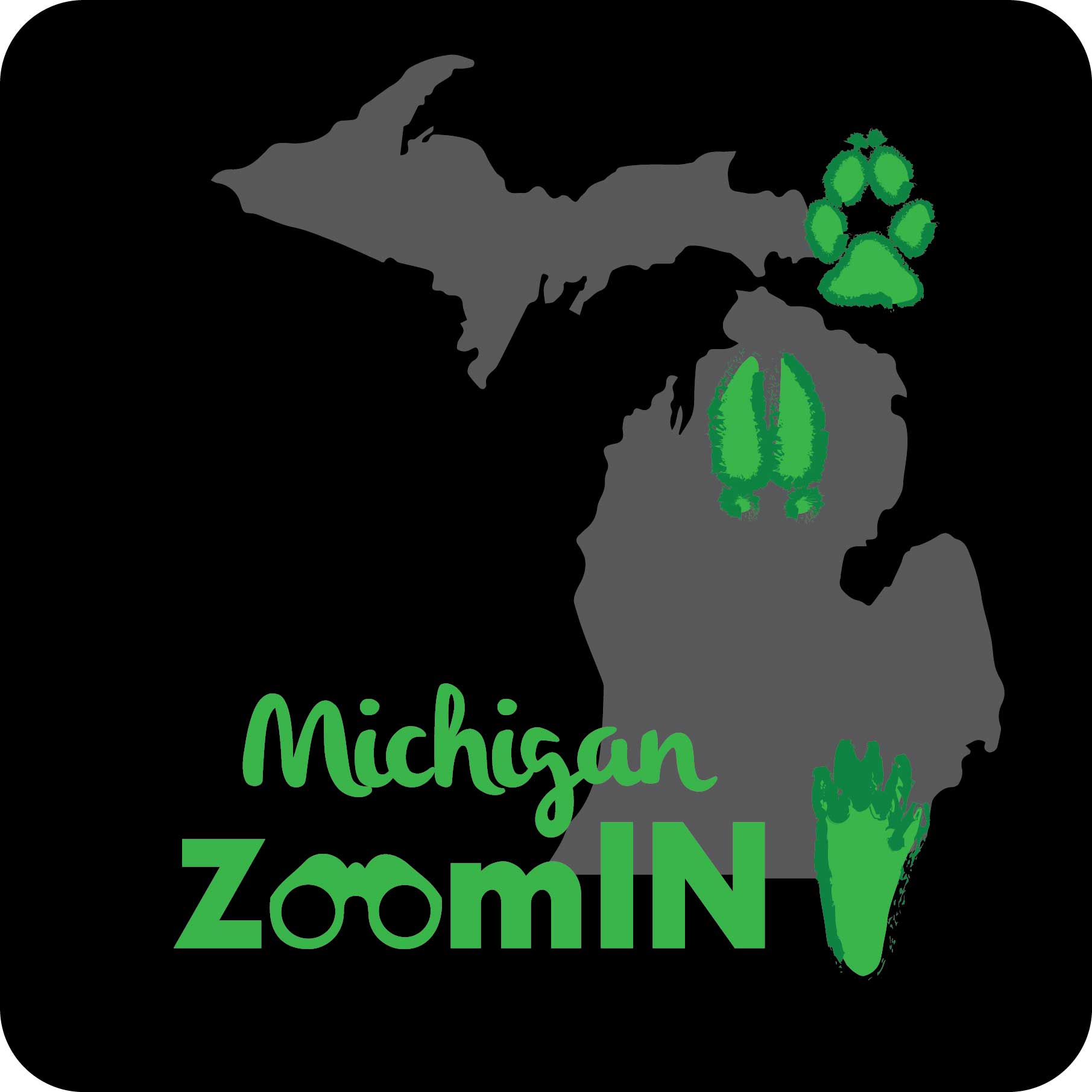 Harris is visiting classrooms across southeast Michigan to meet with science teachers and to demonstrate the ZoomIN website to students. Her efforts are part of Wolverine Pathways and Wolverine Express, U-M programs designed to expose middle and high school students to knowledge and skills needed to be ready for college.

A special emphasis for Michigan ZoomIN will be underserved minority students in Michigan cities, who may not have had much exposure to wildlife, said Harris, who describes herself as a city girl from Philadelphia.

For kids in places like Detroit and Ypsilanti, the camera project has at least two potential benefits. First, students will likely gain a deeper appreciation for, and understanding of, Michigan wildlife. Second, being a citizen scientist might spark career aspirations that had never occurred to them.

“This platform allows students to think about engaging in science, and if they discover that this is something they care about and are interested in, then maybe there is a career for them as a wildlife ecologist, a veterinarian or a conservationist,” Harris said. “And if that happens, then we’ve accomplished something truly transformative.”

Over the past decade or so, camera-trap studies have become increasingly popular with wildlife researchers around the world, driven by advances in digital technology and a desire to conduct non-invasive studies that don’t stress the animals or disrupt their normal activities. The U-M camera-trap project is funded internally, though Harris said she’s seeking outside funds that would allow the study to continue beyond 2017.

“There are so many research questions you can address by using cameras to study wildlife,” Harris said. “We’re really just scratching the surface.”