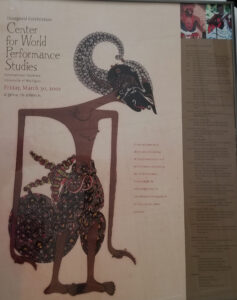 A photo of the poster from the 2001 Grand Opening of the University of Michigan Center for World Performance Studies.

Twenty years ago on March 30, 2001, the University of Michigan Center for World Performance Studies celebrated its grand opening at the International Institute, inviting the community to participate in an evening of lectures, performances and food.

This month, CWPS will launch a series of events to mark the milestone anniversary and to look ahead to the next 20 years.

Described at its founding as “a curriculum that examines the role of the performing arts and artists within a variety of cultural contexts and from numerous disciplinary perspectives,” CWPS has evolved to encompass the broader definition of “performance” embraced by scholars in the interdisciplinary field of performance studies.

In addition to performing arts forms such as music, theater and dance, students and faculty engage with performance art and multimedia; ritual, religious and political acts; and performance in everyday life and work.

“CWPS functions not only as the hub for performance studies for our faculty and students, but also as a vehicle for bringing underrepresented, non-Western, diasporic voices, bodies and acts to campus through a multitude of programs,” said Michael Gould, director of CWPS and professor at the U-M School of Music, Theatre & Dance and the Residential College.

“I have seen firsthand how these opportunities can utterly transform students in ways that lead to personal growth and enriching careers while also providing fertile ground for the campus community to engage with others.”

The core programs have remained consistent through the years: artist residencies that bring performers and scholars from all over the world to campus and beyond; a graduate fellows program that students can combine with Masters and Ph.D. programs; funding for U-M faculty doing performance studies research; and support for events and projects on campus, particularly those hosted by student organizations.

“The work of the center over the past 20 years has consistently advanced the university’s DEI goals, by supporting diversity of artistic work and research, and by valuing diverse epistemologies or ‘ways of knowing,'” Gould said.

In recent years, CWPS has placed greater emphasis on collaborations with community partners, ranging from workshops at Mosaic Youth Theatre of Detroit and the Ann Arbor Public Library to performances at Garage Cultural, CMAP Detroit, and the Ypsilanti and Ann Arbor farmers markets. CWPS moved to a new administrative home in 2016 and is now housed at the Residential College, where it plans to develop rich undergraduate curricular opportunities in the future.

The public is invited to reflect on the success and future goals of the Center for World Performance Studies during two virtual panel discussions:

If you require an accommodation to participate in this event, contact the Center for World Performance Studies at 734-936-2777. Advance notice is necessary as some accommodations may require more time to arrange.