Earth Day comes twice a year for University of Michigan chemist Anne McNeil and her lab—at least it has since last year.

On Earth Day 2021, the McNeil lab organized the inaugural Huron River Watershed Cleanup. Graduate and undergraduate students in the University of Michigan Department of Chemistry picked up thousands of pieces of trash from about 20 metroparks along the Huron River in Ann Arbor and Ypsilanti.

The event was so successful that the group repeated the event in the fall, when they picked up 13,575 items, including 4,494 cigarette filters. The community cleanup days felt like a natural extension of what McNeil’s lab focuses on: the chemical recycling and upcycling of plastics.

“People had just felt content with how recycling is done currently. When it is collected—which isn’t that much—it’s taken to a facility, sorted and chopped up. Then, they remelt the plastic and try to make something else,” said McNeil, professor of chemistry and of macromolecular science and engineering. “But the dirty little secret of that type of recycling is that the properties of the plastic degrade because the recycled product is just a mixture of really different components.”

That is, the same kind of plastic produced by different companies might be composed of materials with different molecular weights, different colorants and different stabilizers—even a different way of producing the plastic. That means you end up with things like park benches and carpet fibers made of recycled plastic, but which can’t be recycled again, McNeil says.

Instead, McNeil decided to begin looking into the ways her lab could use chemicals to break plastic materials into their constituent parts, then using those parts to build a different useful material.

“On the research side, we thought, let’s keep the value in plastics using chemistry,” she said. “Our lab slowly started shifting toward a major focus on chemical recycling.”

With her lab’s focus, McNeil began thinking about how chemistry researchers might do community outreach. She takes daily walks with her kids, during which they pick up trash they find. The ritual sparked an idea, and McNeil made a suggestion in her lab’s Slack: What if they organized cleanup days in parks in Ann Arbor and Ypsilanti, along the Huron River? Danielle Fagnani, a postdoctoral researcher in the McNeil lab, helped organize the first Earth Day event.

“We’re thinking about this stuff all the time in the lab, and what’s unique about this research area is that it’s so tangible to everyday life,” Fagnani said. “Everyone—scientists, nonscientists—uses plastics and hears about this waste crisis, and you can see it when you’re walking outside. So it was natural for us to be interested in cleaning that up.” 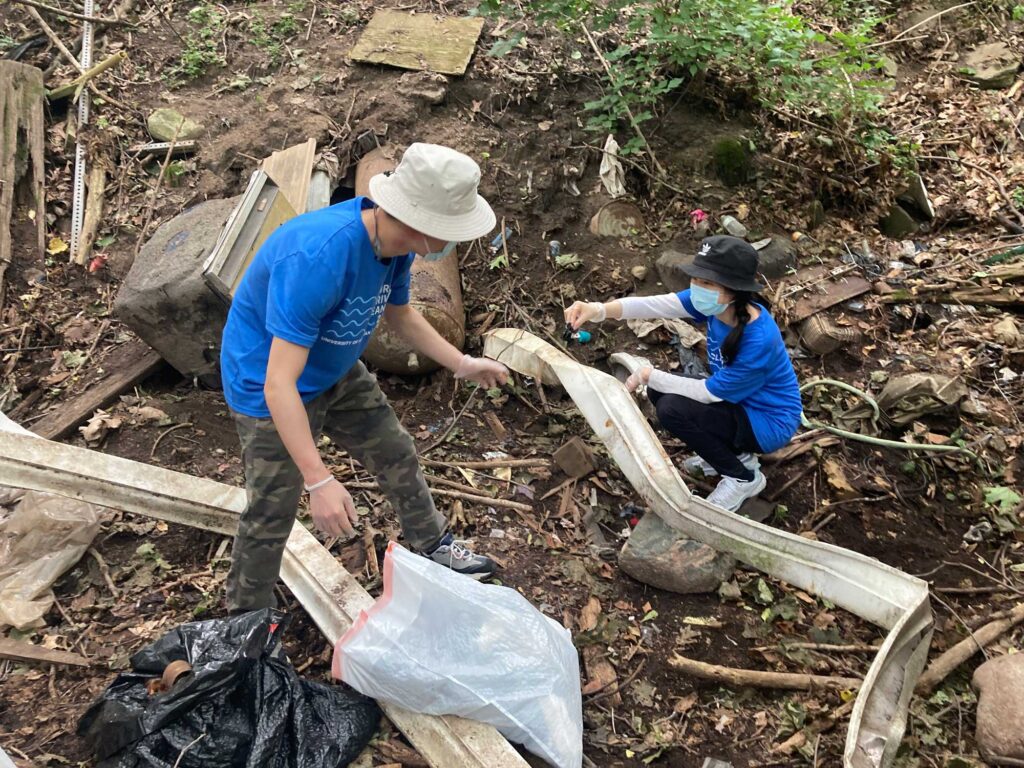 The McNeil lab began to turn its attention to chemically recycling plastic with the work of Takunda Chazovachii, a graduate student researcher who recently graduated from U-M to work at the global paint company PPG. Chazovachii focused on chemically recycling the superabsorbent polymers in diapers, using them to make the same kind of adhesives in sticky notes and on the back of removable wall hooks.

Fagnani has focused on how to chemically recycle polyvinyl chloride, or PVC. Plumbing pipes are composed of PVC, as are plastic tubing used in hospitals, water bottles, bank and credit cards, and thousands of other items. It’s one of the most widely used plastics in the world. It also can’t be recycled.

“In the U.S. for PVC, the recycling rate is virtually zero,” Fagnani said. “It uses phthalate plasticizers, which are toxic, and although they’re being phased out, they’re still abundant in PVC formulations. Additionally, polyvinyl chloride releases hydrochloric acid gas under thermal conditions, which is really bad for recycling plants. So what I’ve done in my work is turn these negatives into a positive using a chemical method.”

“Fifty-seven percent of the mass of PVC is chloride atoms. I’m recovering that portion of the polymer and then using it directly in a subsequent reaction to chlorinate other materials. That’s what we call value-added materials,” she said. “We’ve also found that phthalates actually improve the efficiency of this process. So we found basically a new purpose for the chlorine content of PVC, and then we found a new purpose for the phthalate content of polyvinyl plastics formulations.”

What she and her colleagues have done so far is proof-of-concept, but chloride atoms are used in making agricultural chemicals and pharmaceutical materials such as drugs used to treat Alzheimer’s disease. Plus, the reaction is done at room temperature, which saves energy because most plastics recycling requires heat to break the plastics down.

“Electrochemistry, electrosynthesis, is generally thought of as a green technique,” Fagnani said. “Doing a chemical reaction at 25 degrees Celsius—room temperature—is usually going to be lower energy than heating something up to 200 degrees to mechanically recycle it.”

Postdoctoral researcher Woojung Ji is continuing the work of Chazovachii. Chazovachii and McNeil discovered that the adhesive he made from diaper polymers trapped microplastics derived from rubber tires. Now, Ji is working to optimize these chemical adhesives to best capture different types of microplastics, and the lab is collaborating with Brian Love, a professor at Michigan Engineering, among others, to develop devices that can capture microplastics out of wastewater treatment centers.

There is a kind of direct connection to McNeil’s lab through her Earth Day cleanups. Plastic left on the ground will break down, degrading into microplastics that can find their way into our water systems.

Studies have found that microplastics have worked their way into the bodies of fish. A study suggests humans eat, drink or breathe up to a credit card-sized amount of plastics each week. Another recent study has found microplastics embedded in people’s lungs. McNeil’s focus on the Huron River watershed removes at least a small amount of plastic that could end up in the river, and ultimately, in Lake Erie.

Fagnani says the cleanup days are also a good way to socialize across the department in a way that was safe during the start of the pandemic.

“Our first event, on Earth Day 2021, was a year after COVID started, and that was a year of some Zoom stuff—a lot of Zoom stuff—but no event that was safely in-person. This was part of our intention: to have a safe event with small teams of three to four people, spread out at different parks,” Fagnani said. “That way, people in our department could meet other people in the department. For a lot of people, that was part of why they participated.”

Each person who participates in the cleanup events receives a T-shirt (one per year, if the person participates in both cleanup days), made out of 100% recycled fabrics. Prizes for the top teams included compostable planters.

U-M undergraduate student Chase Dautrich, a junior who is pursuing a major in the environment in LSA’s Program in the Environment and minoring in business, participated in the Earth Day event. He took a course called The Anthropocene, taught by McNeil, which influenced his choice to “specialize in natural capital accounting and pursue a career in corporate accountability.”

“So many well-intentioned people give into fervor around climate activism after being influenced by social factors more than scientific ones, and it creates a challenge in working together because the ‘people in charge’ are more attached to their politics than finding comprehensive solutions,” Dautrich said. “This class was helpful because it gave students a well contextualized and empirical background in climate change, encouraging us to decide for ourselves whether we are living in ‘The Anthropocene.'” 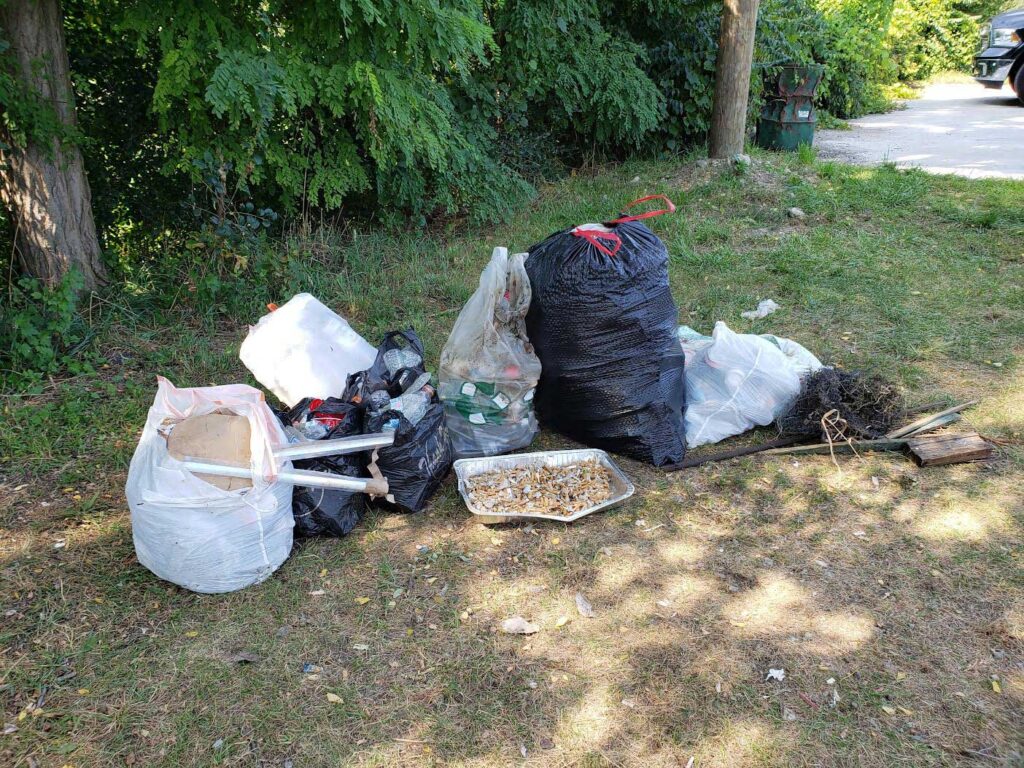 He said the amount of trash they encountered was unsurprising.

“Picking up trash was nice because I got to connect with the other volunteers in my group who had similar backgrounds in STEM at U-M,” Dautrich said. “The trash collection itself wasn’t super novel just since we’re all exposed to so much plastic pollution every day. But of course, it’s still disheartening to consider how much of our plastic ends up in the environment that we don’t clean up.”

This is something McNeil feels acutely—as do other researchers. Her idea was inspired by Megan Feiser, a professor at the University of Southern California who leads similar cleanup days on a beach in California. McNeil talked with Feiser, who helped McNeil design participation waivers and helped with ideas about safety guidelines (“If it looks dangerous, don’t touch it. If it looks sharp, if it’s a dead animal, if it looks like drugs or needles, don’t touch it.”) The cleanup crew was instructed to take pictures of hazardous or oversized items and send them to McNeil, who sent the photos to park employees.

Feiser also told McNeil about an app the chemistry researchers could use to log the materials they found. Called Marine Debris Tracker, the open data app can be used by citizen scientists to log the trash they find. Researchers can then access this data to track the kind of materials that find their way into the environment.

McNeil considers herself a lifelong environmentalist, and refocusing the energy of her lab, and its community outreach, is a way to honor that.

“I’ve been an environmentalist for a really long time, but I haven’t, until these last few years, connected my passion for chemistry with my passion for the environment,” she said. “Moving in this direction and organizing something like this cleanup is kind of a way to finally have these two halves of me become a whole.”