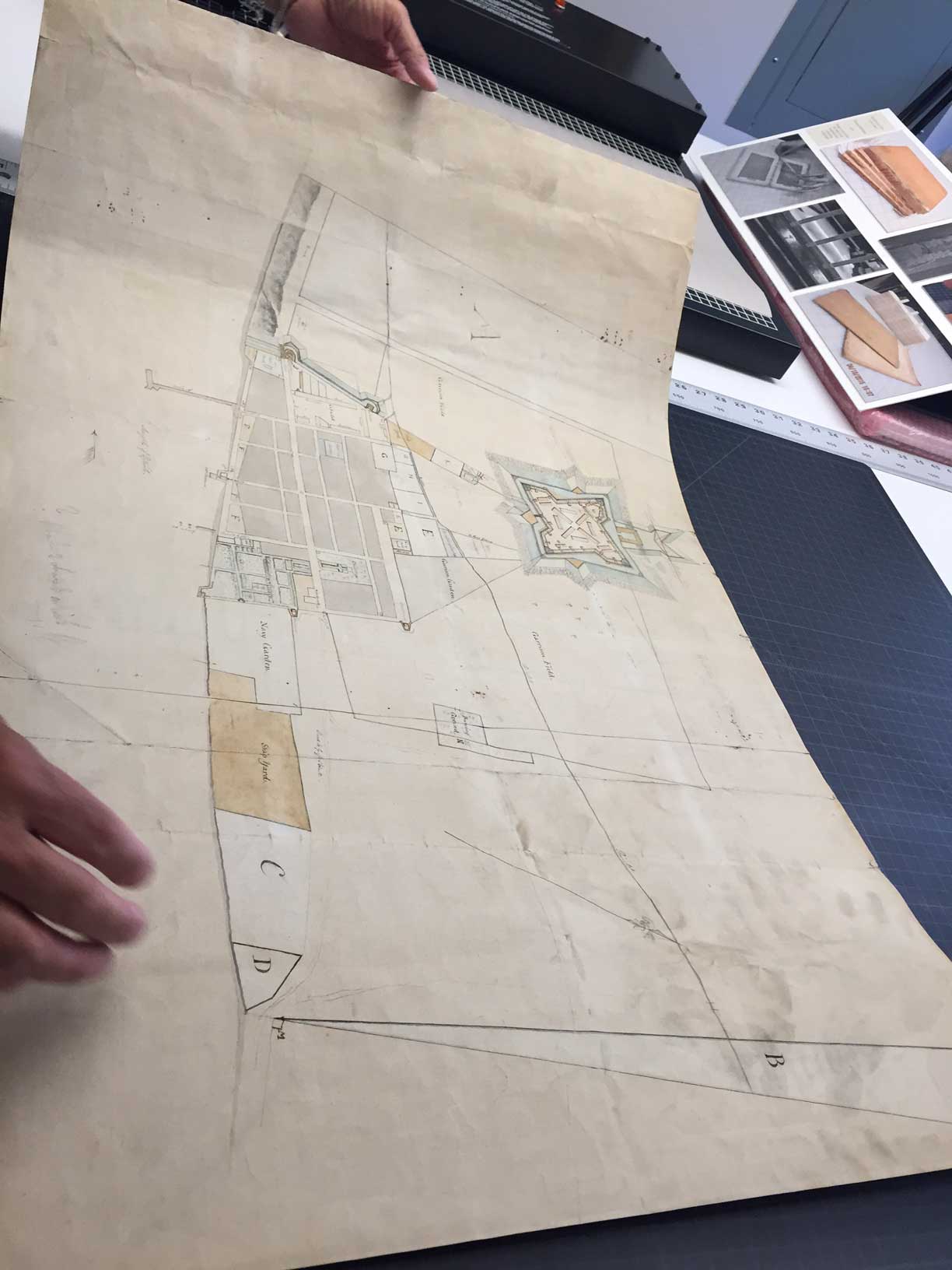 “Rough sketch of the King’s Domain at Detroit,” a 1790 manuscript plan of the city of Detroit, was discovered in a family home in Almonte, Canada. Here archivists inspect the work for the first time outside of its original frame. Image courtesy: William L. Clements LibraryANN ARBOR—A recently discovered primary-source document providing new information about Detroit’s early history is now part of the University of Michigan’s William L. Clements Library collection.

A framed 21-by-40-inch map that reveals a plan of the city in 1790 was discovered in a family home in Almonte, Ontario, after the owner contacted historians to check its validity.

“The grandson of the original owner said that the map was bought by his grandfather sometime back in the 1930s,” said Brian Dunnigan, curator of maps and associate director of the Clements Library. “This is a really special find because there aren’t any other maps that depict Detroit at this particular time period, which was about six years before the British peacefully evacuated the town and fort to make way for the arrival of United States troops.”

According to Dunnigan, who is an expert in early Detroit, Mackinac, Niagara and 18th-century Great Lakes history and author of “Frontier Metropolis: Picturing Early Detroit,” the manuscript plan identifies the east and west boundaries of the “Domain,” an extra-wide ribbon strip of land that Antoine Laumet de La Mothe Cadillac, founder of Detroit, granted to himself in 1701.

The map includes many new details of the frontier city. Within the platted ground of the Domain is a very specific plan of the town, its defenses, and Fort Lernoult, constructed during the American Revolution and located (in modern terms) at the intersection of Fort and Shelby streets. It also includes proposed fortifications that were never constructed.

Due to a number of parcels of land bearing numbers, Dunnigan believes the map was once accompanied by a key or a report that has not yet been found.

Smith’s plan captures Detroit at a significant time in its history—in 1790 U.S. troops were advancing on the Indian villages of northern Indiana and thus threatened the British garrison at Detroit. 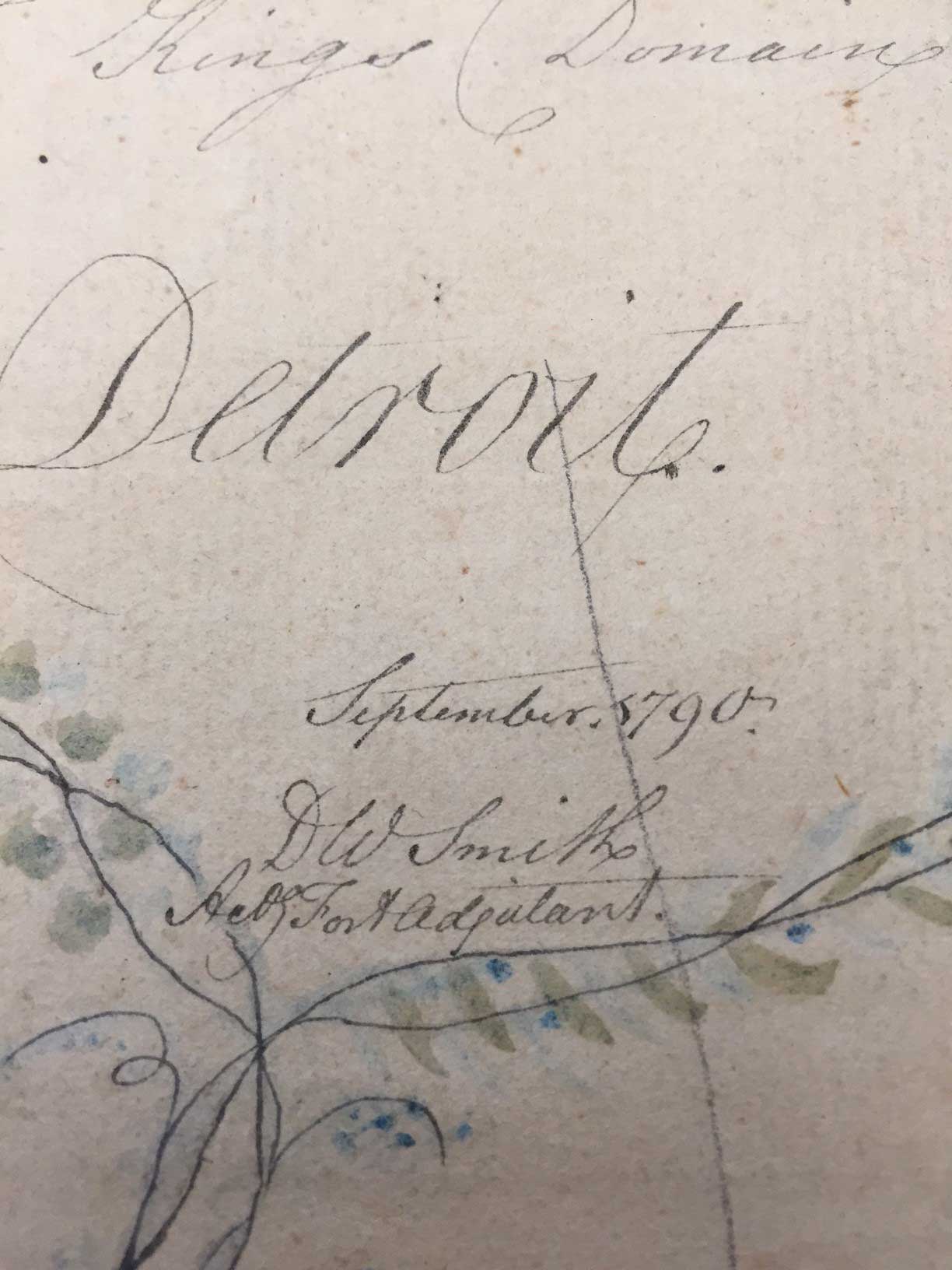 The map adds to a rich treasure-trove of Detroit history held at the Clements Library, which is home to one of the most comprehensive collections of early American history in the world. The collection includes several dozen plans of Detroit, charting its growth from 1749 until 1900; a depiction of colonial Detroit in the papers of Gen. Thomas Gage; numerous manuscript collections of 18th- and 19th-century Detroit families; the papers of Josiah Harmar that reveal U.S. plans to occupy Detroit in 1790—the same date as the Smith map; numerous photos picturing Detroit in the 19th century; and much more.

“The D. W. Smith 1790 map of Detroit is a wonderful acquisition for the Clements Library when considered alongside our current holdings,” said K. Kevin Graffagnino. “It’s exciting to know that there’s still a lot of historical documentation out there waiting to be discovered—everything that turns up solves another piece of the puzzle.”

The map will be on view for the first time at 4 p.m. Tuesday, Sept. 27, at the Hatcher Graduate Library, following a Clements Library-sponsored talk given by Catherine Cangany, associate professor of history at the University of Notre Dame.

Cangany will discuss the history of Detroit as both a frontier town and seaport city in the 18th century. She is author of “Frontier Seaport: Detroit’s Transformation into an Atlantic Entrepôt,” which relies on archival materials from the collections from the Clements Library. The event is free and open to the public.

A forthcoming exhibition surrounding the map is planned at the Clements Library in 2017.