ANN ARBOR—Under the cold clear waters of Lake Huron, University of Michigan researchers have found a five-and-a-half foot-long, pole-shaped piece of wood that is 8,900 years old. The wood, which is tapered and beveled on one side in a way that looks deliberate, may provide important clues to a mysterious period in North American prehistory. 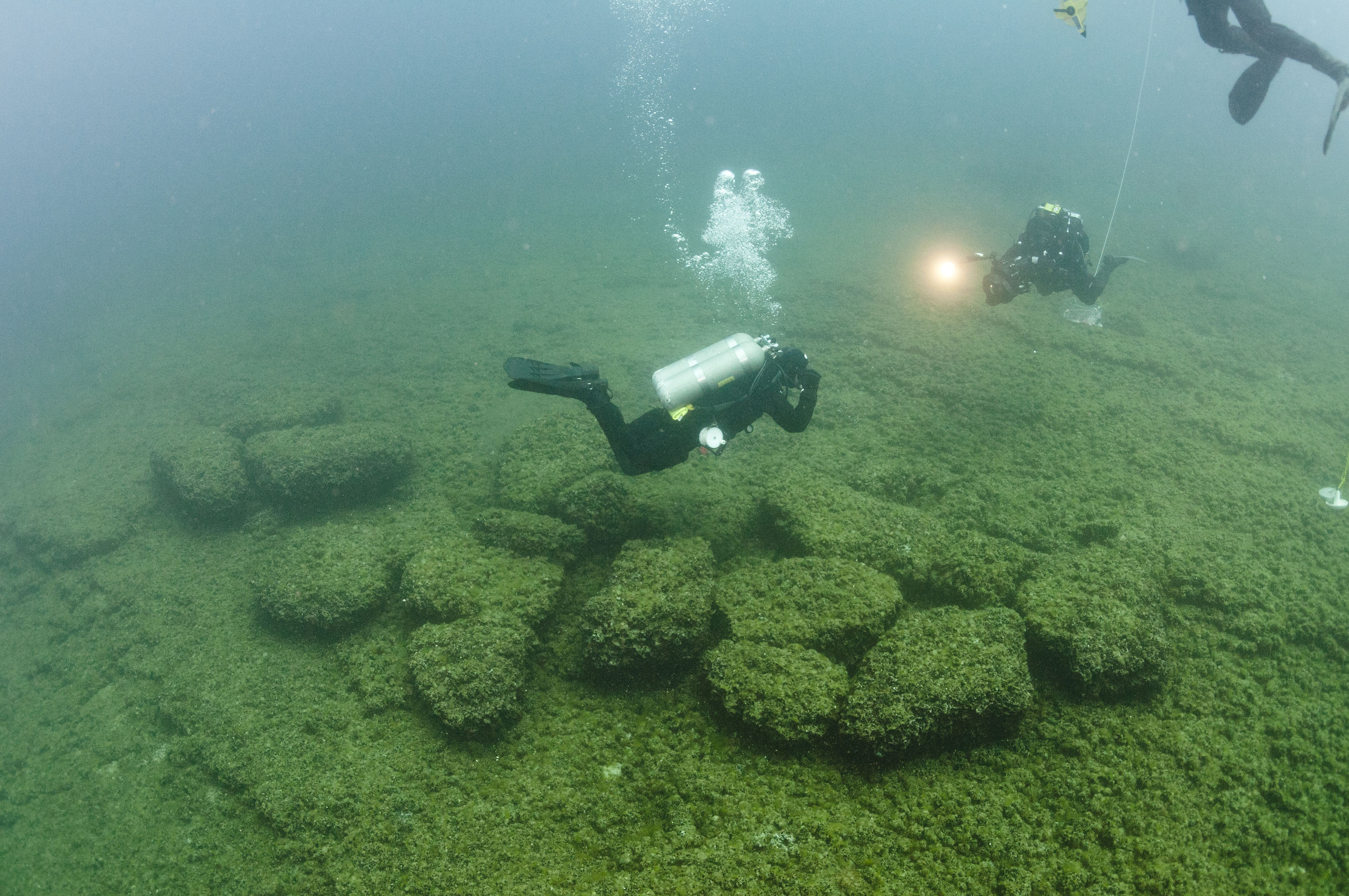 Divers examining boulders at the bottom of Lake Huron that served as caribou drive lanes for prehistoric hunters. Photo courtesy of Tane Casserly
“This was the stage when humans gradually shifted from hunting large mammals like mastodon and caribou to fishing, gathering and agriculture,” said anthropologist John O’Shea. “But because most of the places in this area that prehistoric people lived are now under water, we don’t have good evidence of this important shift itself– just clues from before and after the change.

“One of the enduring questions is the way the land went under water. Many people think it must have been a violent event, but finding this large wood object just sitting on the bottom wedged between a few boulders suggests that the inundation happened quickly but rather gently. And this in turn suggests that we’ll find more intact evidence of human activity in the area.” 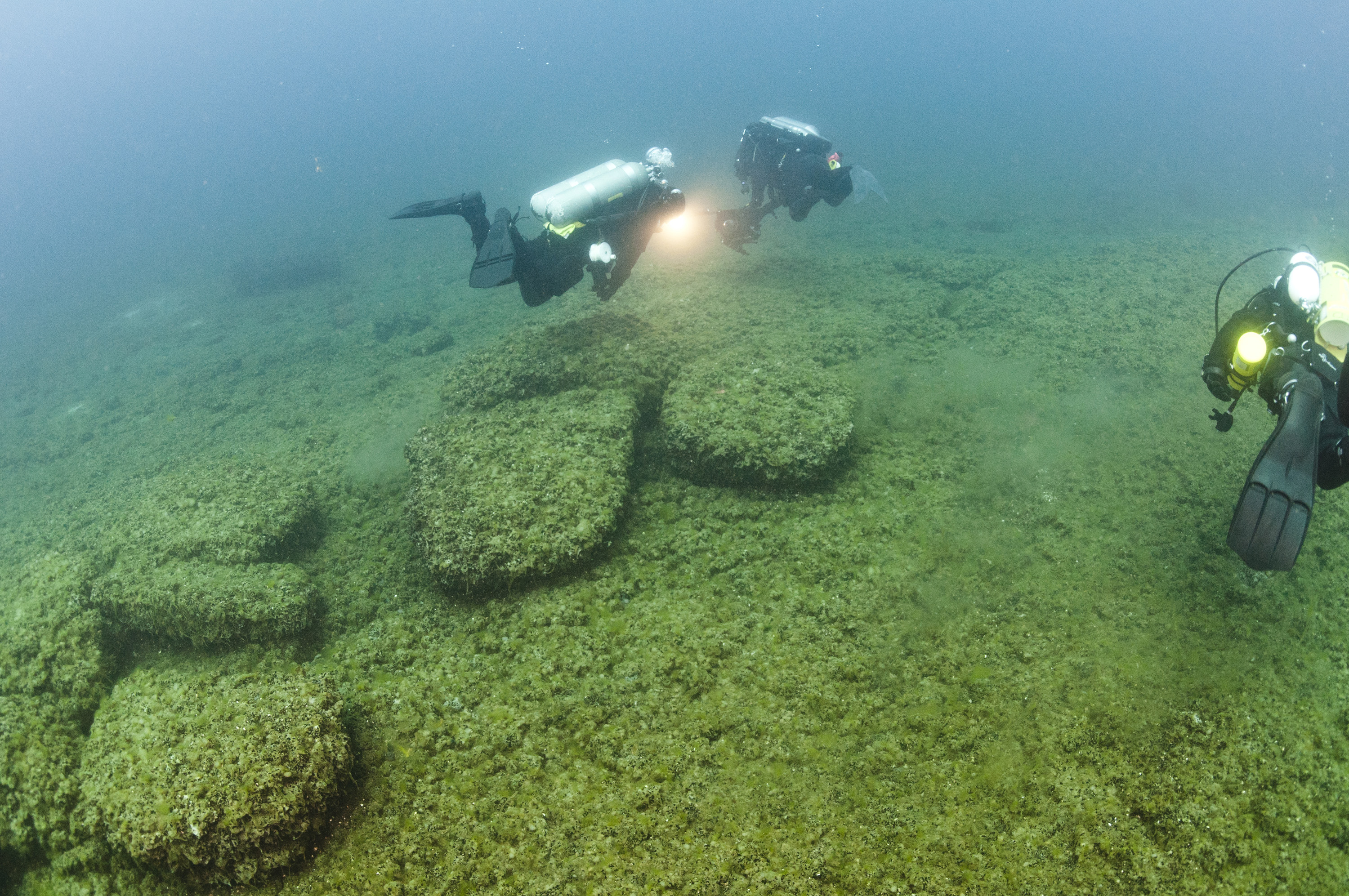 Divers examining boulders at the bottom of Lake Huron that served as caribou drive lanes for prehistoric hunters. Photo courtesy of Tane CasserlyWith support from the National Science Foundation (NSF) and the National Oceanic and Atmospheric Administration (NOAA), O’Shea and U-M colleague Guy Meadows began exploring the area in the middle of modern Lake Huron several years ago. In 2009 they reported finding a series of stone features that they believe were “drive lanes” used by ancient PaleoIndian hunters to funnel caribou to slaughter, a technique still used today by the Inuit. These drive lanes were located on the Alpena-Amberley Ridge, a land connection across the middle of modern Lake Huron that linked northern Michigan with central Ontario during the low-water periods of the Pleistocene and early Holocene ages.

Since that discovery, O’Shea and Meadow have worked on identifying human campsites, which are typically located away from hunting areas. Piloting their 25-foot boat, the S/V Blue Traveler, about 40-60 miles out into Lake Huron from Alpena, Michigan, the researchers first spotted the ancient wood object using a small hand-deployed remote operated vehicle (ROV) equipped with a video camera. Then a team of divers – including O’Shea – went down about 100 feet to retrieve it.

Initially stored in a PVC tube filled with lake water, the specimen’s age has now been fixed using carbon dating. It is currently undergoing more detailed analyses to determine whether there has been human modification, which visual examination suggests. “The first thing you notice is that it appears to have been shaped with a rounded base and a pointed tip,” O’Shea said. “There’s also a bevel on one side that looks unnatural, like it had to have been created. It looks like it might have been used as a tent pole or a pole to hang meat.” 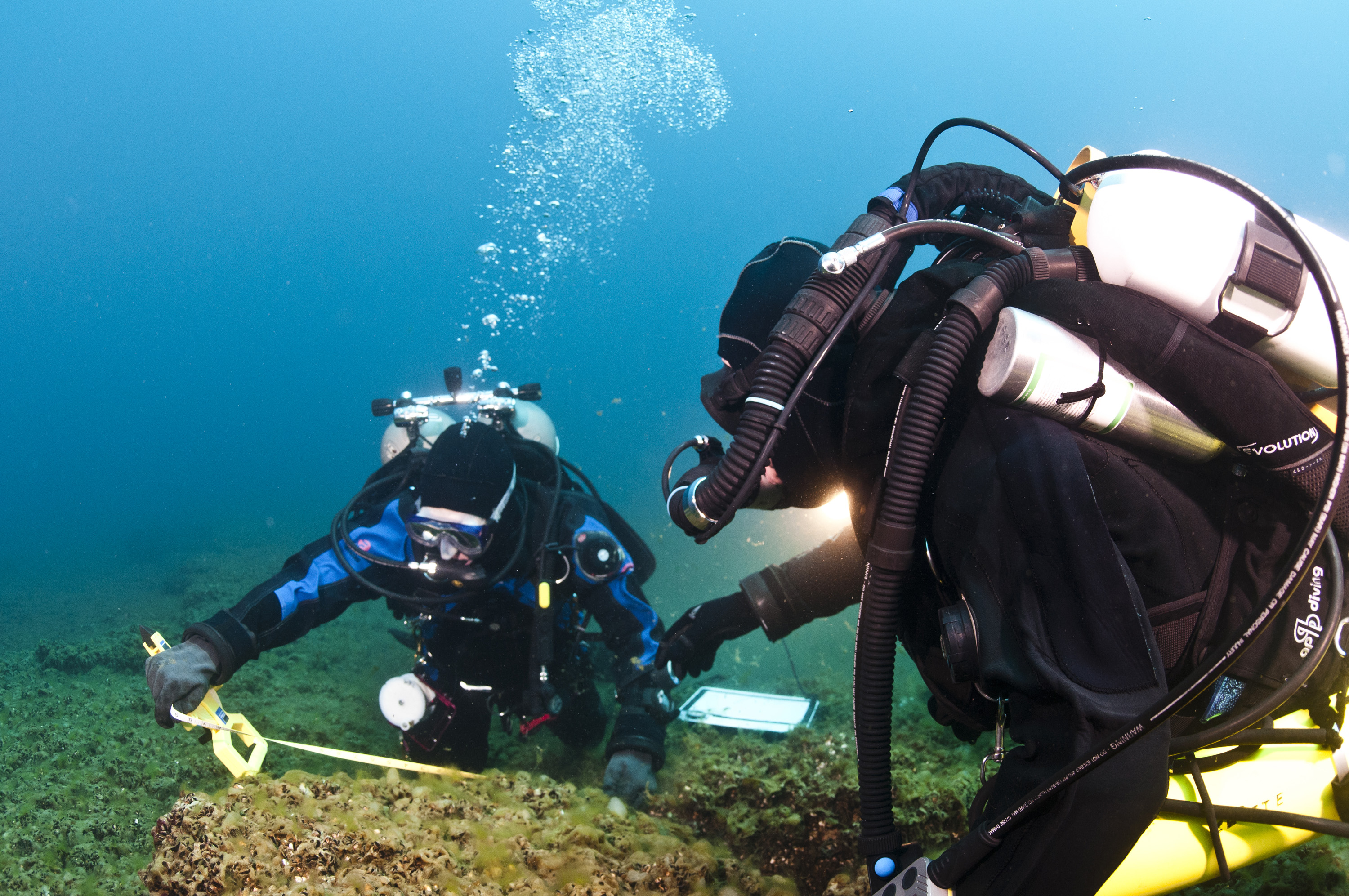 Divers tagging and measuring boulders. Photo courtesy of Tane Casserley, NOAA Thunder Bay National Marine SanctuaryIn addition to the wood specimen, the U-M researchers have collected many other samples from the bottom of the lake that they hope will provide clues about the environment before it was submerged by the rising lake water. Some of the samples are now being analyzed at U-M, while others are being analyzed by a Canadian expert on submerged site reconstruction and microdebitage – the examination of flakes of stone that are less than one millimeter in diameter, produced in large quantities when stone tools were made.

So far, according to O’Shea, quantities of pine pollen and charcoal have been found. “Slowly, the environmental picture is filling in,” he said. “There was a marsh close by this site. It seems we’re narrowing in on people, but of course forest fires could have created the charcoal as well as cooking fires. So we need to wait for the analyses to be sure about what we’ve got here.”

O’Shea and colleagues will also need to wait for calmer weather before they can resume their search for evidence of human life under the great lake.

This research was carried out in collaboration with NOAA’s Thunder Bay National Marine Sanctuary and with the Great Lakes Division of the U.S. Navy’s Sea Cadets Corp, both based in Alpena, Michigan.