ANN ARBOR—University of Michigan disease ecologist Meghan Duffy is one of 15 scientists awarded five-year grants from the Gordon and Betty Moore Foundation today to study symbiosis in aquatic systems. 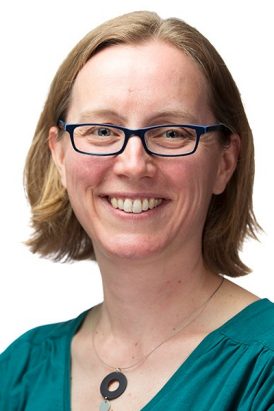 Duffy, a professor in the Department of Ecology and Evolutionary Biology, will receive $2,025,000 of unrestricted support over the next five years to pursue “innovative, risky research that has high potential for significant conceptual and methodological advances in aquatic symbiosis,” according to the Moore Foundation.

Current and emerging leaders in aquatic symbiosis research, as well as scientists who will bring their deep expertise from other areas of science to aquatic symbiosis, were selected from a competitive pool, according to the foundation.

“I am extremely grateful for the funding and especially for the Moore Foundation’s willingness to fund high-risk, high-reward projects, which otherwise are very hard to fund,” said Duffy, whose research focuses on the ecology and evolution of infectious diseases.

Symbiosis occurs when organisms from two different species live together in intimate association. There are varying types of symbiosis—including parasitism, commensalism and mutualism—that reflect the degree of benefit and harm stemming from the association of the two species.

The research funded by the Moore Foundation’s Symbiosis in Aquatic Systems Initiative is expected to provide a more comprehensive understanding of the origins, evolution, physiology, ecology and natural history of aquatic symbioses.

The initiative was launched in 2019 and focuses on aquatic symbioses that include a microbial partner. The smaller member of a symbiotic pair is often called a symbiont.

“The investigator awards will serve as a flagship for the Symbiosis in Aquatic Systems Initiative and are expected to push the frontier of aquatic symbiosis research by providing stable and ample support for brilliant scientists who will take risks that drive creative work,” said Sara Bender, program officer of the Symbiosis in Aquatic Systems Initiative at the Moore Foundation.

Duffy studies the ecology and evolution of interactions between parasites and their hosts in freshwater systems, with special focus on poppy seed-sized crustaceans called Daphnia.

Also known as water fleas, these shrimplike creatures play a key role in freshwater food webs and are a vital food source for small fish. In the wild, Daphnia feed on algae and bacteria floating in the water column and are part of a group of tiny aquatic animals known as zooplankton grazers.

Daphnia are infected by various microbes in the wild, and Duffy’s lab has demonstrated that some of those symbionts shift between parasitism, commensalism and mutualism. The dynamic nature of these host-symbiont interactions in Daphnia, which can influence broader ecosystem processes in lakes, will be a main focus of the Duffy lab’s Moore Foundation-funded efforts.

“In the past, biologists have tended to have a very fixed view of host-symbiont interactions—thinking, for example, that a particular microbe always harmed its host,” Duffy said. “But now we know that the same microbe sometimes benefits its host and sometimes harms it. We need to understand what’s driving that kind of variation, so I’m really looking forward to exploring how dynamic these interactions are.”

The upcoming studies will include laboratory experiments to infect Daphnia with a microsporidian known as MicG and to track the effects on host and symbiont fitness. The U-M researchers will also investigate the ecosystem-level impacts of shifts along a mutualism-parasitism gradient.

Another theme of the work will be understanding the factors that allow parasites to jump to new host species—something especially timely given the recent spread of the novel coronavirus. In the system that Duffy studies, she found that some parasites can easily move to novel host species, while close relatives can’t. The new Moore Foundation funding will help researchers understand why this is the case.