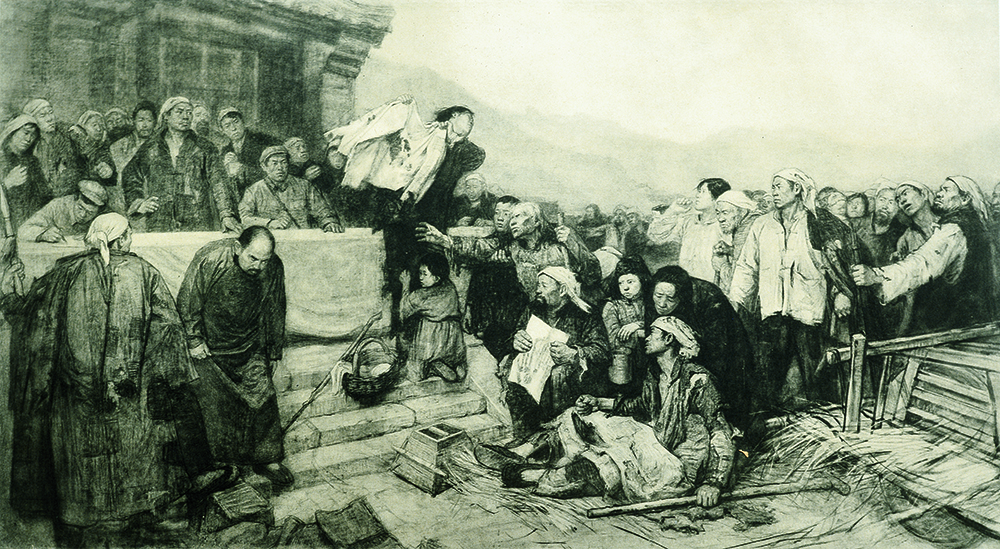 Wang Shikuo, The Bloodstained Shirt, 1959, charcoal on canvas. Courtesy of the National Museum of China and Wang Shikuo Foundation.

The resulting photograph will be the focus of “Wang Qingsong/Detroit/Beijing,” a new exhibition opening at the University of Michigan Museum of Art Feb. 2.

The drawing that the work is based on, “The Bloodstained Shirt” (1959) by Chinese realist painter Wang Shikuo, depicts peasants rising up to protest their suffering at the hands of a cruel landlord and triumphantly reclaiming their right to the land. 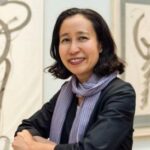 Natsu Oyobe, curator of Asian art at UMMA, says that Wang often uses large-scale photographs based on iconic works of art to reflect the rapid changes in Chinese society over the past 30 years.

“Qingsong is an artist and an activist,” said Oyobe, who also posed in the re-enacted photograph last year. “His version of ‘The Bloodstained Shirt’ reminds us of the human consequences of the pursuit of profit and the power of collective action.” 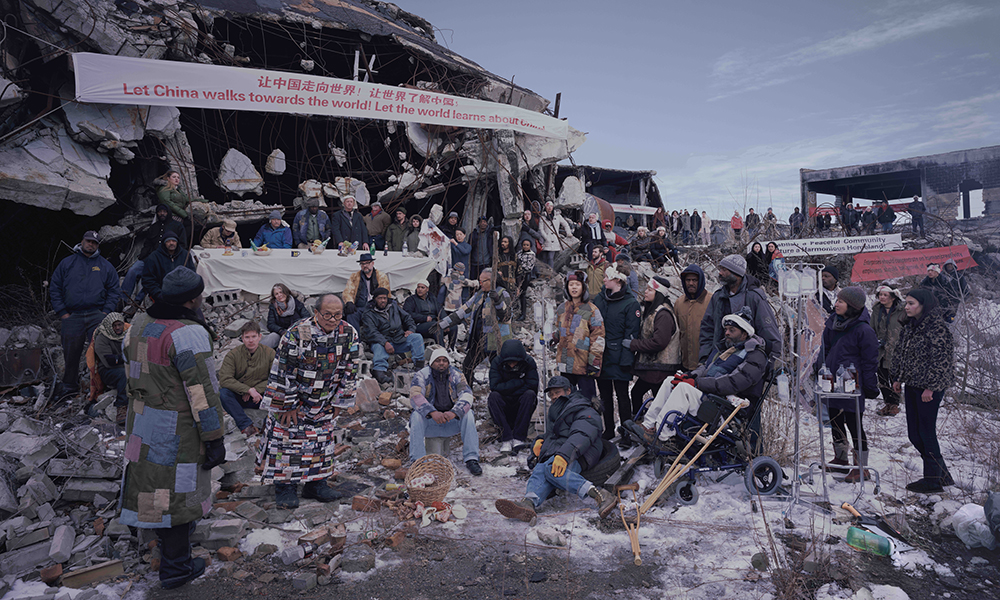 Wang had originally intended to complete his project in Beijing, where many old neighborhoods have been destroyed by real estate developers to construct high raises for the wealthy.

While visiting southeast Michigan during a residency with the U-M Lieberthal-Rogel Center for Chinese Studies, however, he was struck by a similar phenomenon: private speculation on and rebuilding of abandoned properties in Detroit and places like Highland Park, with little regard for the needs of most residents.

The scene in the Michigan photograph takes place among the ruins of an abandoned candy factory in Highland Park. Wang, who is seated at a table with a white tablecloth, bears a coat made of clothing labels, taking on the role of the landlord. He and his wife, Zhang Fang, who can be seen waving the infamous blood-stained shirt, are surrounded by carefully placed Michigan actors who are playing the part of the rebelling Chinese peasants.

Above them are the artist’s version of government banners, now ubiquitous in Beijing, trumpeting the ideals—seemingly forgotten—of the Communist revolution.

The exhibition includes a large-scale photograph of the re-enactment of “The Bloodstained Shirt,” a documentary video of the project with an artist interview, and banners made in collaboration with Highland Park residents in October 2018 that give voice to their concerns and their hopes for transformation and renewal.