ANN ARBOR—Today’s magnitude-7.5 earthquake in the Hindu Kush region of northeastern Afghanistan also shook parts of Pakistan and India. The University of Michigan has several experts who can discuss the event and its geological context. They are:

Ben van der Pluijm, an earthquake geologist in the Department of Earth and Environmental Sciences. Van der Pluijm said today’s quake, like last spring’s devastating Nepal earthquake, occurred in a region where the Indian subcontinent is moving northward against and underneath Eurasia. Monday’s earthquake in Afghanistan was slightly less powerful, but much deeper than the Nepal quake. The Afghan quake occurred at a depth of about 130 miles (~210 kilometers) and is considered an intermediate-depth earthquake.

“Today’s earthquake is part of the same tectonic system as the earlier Nepal quake to the east. But the source of today’s quake is not shallow, so the surface impact should be moderate except close to the epicenter,” van der Pluijm said. “Energy dissipates with distance from the source, both vertically and horizontally.”

Marin Clark, a geomorphologist and geophysicist who studies tectonic movements in the Himalayan region and who is an expert on landslides triggered by earthquakes. Clark is an associate professor of geological sciences in the Department of Earth and Environmental Sciences.

The Oct. 26 Afghanistan earthquake is related to convergence between the Eurasia and India plate boundary, the same boundary that was responsible for the April 2015 Nepal earthquake, Clark said. Under Afghanistan’s Hindu Kush Mountains, where Monday’s earthquake occurred, the Indian continent is sliding beneath Eurasia and is being pulled down to depths of more than 200 kilometers. “Subduction of continental lithosphere to great depths is responsible for intermediate-depth earthquakes, like the one we saw today and a similar magnitude-7.4 event in 2002,” Clark said. 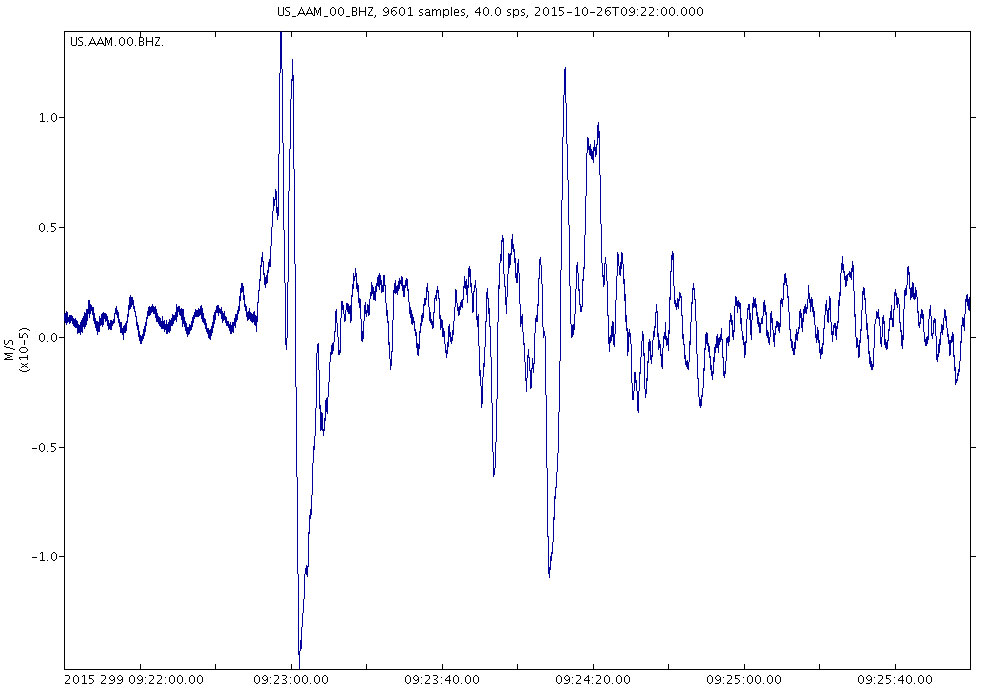 Seismogram of the Oct. 26, 2015, Afghanistan earthquake recorded at the Ann Arbor digital seismograph station on the University of Michigan campus. Image credit: University of Michiganprofessor of geophysics in the Department of Earth and Environmental Sciences. His research involves the analysis of seismic waves to image Earth’s interior. Unlike last spring’s Nepal earthquake, which ruptured a segment of the interface between the Indian and Eurasian plates, Monday’s intermediate-depth Afghan earthquake occurred within the subducting Indian plate and reflects internal deformation of that plate, Ritsema said.