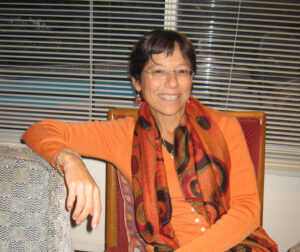 ANN ARBOR—Valerie Kivelson, an expert on early modern Russia and European history, was elected as one of 76 Fellows to the British Academy, a leading institution for humanities and social sciences.

The prestigious fellowship, announced today by the academy, has recognized more than 1,400 of the leading academic minds worldwide for their achievements.

Kivelson, the Thomas N. Tentler Collegiate Professor and an Arthur F. Thurnau Professor, is one of only 20 corresponding fellows elected from universities outside of the United Kingdom.

“This award from the British Academy is wonderful news and very richly deserved,” said Jay Cook, professor and chair of the U-M Department of History. “Val Kivelson has long been one of the world’s top historians of medieval and early modern Russia, as well as the history of religion, visual culture, and witchcraft.

“She is also one of the finest classroom teachers in LSA and a superb mentor to our graduate students. We are very lucky to have her as a member of our department.

Kivelson came to U-M in 1989 as an assistant professor of history following a year as an instructor at St. Mary’s College of California. She served as director of the Center for Russian and East European Studies in 1999, then became an associate history department chair later that year.

She earned a master’s degree at San Francisco State University and her doctorate at Stanford University. She has served on various boards and committees, including the Executive Committee of LSA (2014-2017). An author of many books and articles and editor of several volumes, Kivelson has received numerous fellowships and awards.

“Whether it is climate conservation or the aging society, the rise of artificial intelligence or social cohesion, our new fellows’ wealth of expertise means the academy is exceptionally well-placed to provide new knowledge and insights on the challenges of today,” he said. “Their work has opened rich new seams of understanding and discovery, offering new perspectives on long-standing and emerging challenges alike.”

As well as a fellowship, the British Academy is a funding body for research, nationally and internationally, and a forum for debate and engagement.