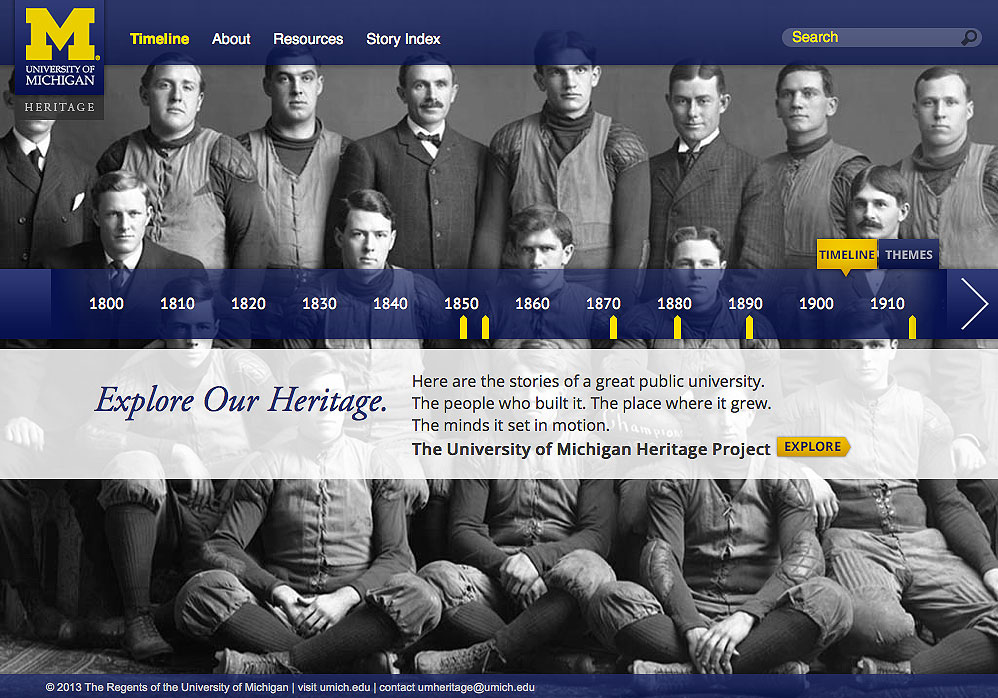 ANN ARBOR—The University of Michigan has launched an interactive website filled with stories, photos and other content to share the rich history of the university, which will celebrate its bicentennial in 2017.

Lisa Rudgers, vice president for global communications and strategic initiatives, said the U-M Heritage Project website “emphasizes the university’s leadership and innovation, as well as the role of the mind and intellect. We are introducing the community to some special university people they may not know at all, or not know much about.”

Heritage website viewers are greeted by slideshow images. A timeline and five themes are revealed: A Public University, Teacher and Student, Explorations, The Students’ World and A Campus Grows.

The story of Ruth Bacon Buchanan, a receptionist at the Museum of Natural History, is among the initial stories presented. During World War II, “Aunt Ruth” Buchanan wrote to former students and others with U-M ties who were fighting the war.

“She corresponded with more than 2,200 men and women, wrote nearly 18,000 letters, mailed more than 21,000 cards—for birthdays, valentines and holidays. It’s astounding,” said Kim Clarke, director of executive communications and project manager for the website. “We really want to share dramatic and personal stories that make up the Michigan story—one people will come to know and share.”

Born to wealth and privilege in Sweden, in Ann Arbor “Rudy” Wallenberg lived in plain boarding houses, sometimes stressed over exams, and hitchhiked around the United States for summer adventure.

Photos and other images—many never before displayed in public—are a key element of the story presentation. Aunt Ruth is revealed as a pleasant, neat woman pictured at a writing table. The tall, trim Wallenberg poses for a photo on the Bear Mountain Bridge in upstate New York. Martin Luther King Jr. engages the Hill Auditorium crowd, from behind the historic lectern donated by the Class of 1913.

“We’re big believers in traditional storytelling, but storytelling gets a boost when people can see images of places and characters,” said James Tobin, an authority on U-M history and project consultant.

Story topics run the gamut from unsettling to triumphant. Medical faculty of the 19th century sometimes crossed the bounds of polite society to secure cadavers for anatomical studies, as recounted in the story entitled “Such Horrible Business.”

“We determined early on that we would not shy away from the more challenging parts of our history, since those chapters so often led to important reform here and elsewhere,” Rudgers said.

Clarke says the U-M Bentley Historical Library’s resources are a key source for the website. The research of Kaitlyn DelBene, a senior from Shelby Township, studying Italian and English, has been integral to the content, she says.

The Heritage website launches with 10 featured stories. Additional narratives are planned each year through the bicentennial celebration in 2017.

The website is specifically designed for tablets, but is just as adaptable to laptop and desktop computers as well as hand-held devices. The project is supported by the Office of the President, Office of the Vice President for Global Communications and Bentley Historical Library.