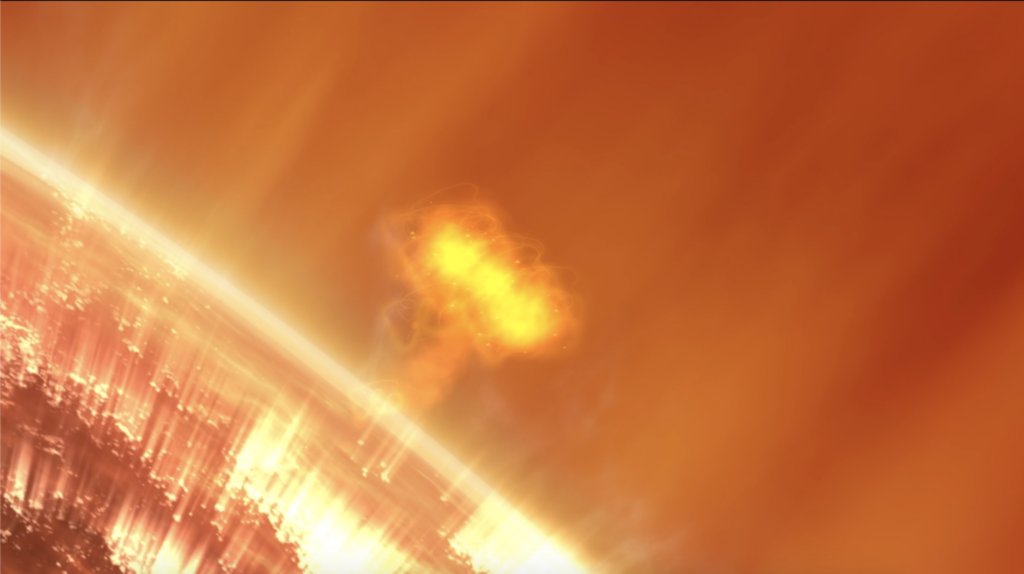 A new NASA mission called SunRISE will study what drives solar particle storms – giant surges of solar particles that erupt off of the Sun – as depicted in this illustration. Understanding how such storms affect interplanetary space can help protect spacecraft and astronauts. Image credit: NASA

A new $62.6 million NASA mission led by the University of Michigan aims to provide better information on how the sun’s radiation affects the space environment that our spacecraft and astronauts travel through.

The Sun Radio Interferometer Space Experiment, or SunRISE, consists of miniature satellites called cubesats that form a “virtual telescope” in space to detect and study the radio waves that precede major solar events. The waves can’t be detected on Earth’s surface due to interference from the region of Earth’s upper atmosphere known as the ionosphere.

SunRISE, expected to launch in 2023, will offer a never-seen-before glimpse at what goes on in the area above the sun’s surface, the solar corona. This region poses several long-standing mysteries for researchers.

“We can see a solar flare start, and a coronal mass ejection start lifting off from the sun, but we don’t know if it is going to produce high energy particle radiation, and we don’t know if that high energy particle radiation is going to reach Earth,” said Justin Kasper, U-M professor of climate and space sciences and engineering who leads the mission.

“One reason why is we can’t see the particles being accelerated. We just see them when they arrive at the spacecraft, which isn’t much of a warning.”

U-M will run the science operations center that converts the signals collected from the cubesats into images. Those images are expected to reveal which part of a coronal mass ejection (CME) is responsible for accelerating radiation particles outward.

Flying in a loose formation about six miles across, six cubesats will form the first imaging low frequency radio interferometer in space. The satellite constellation will orbit Earth slightly above geosynchronous orbit at five Earth radii, or 22,000 miles, from the surface.

“The cubesats will give us an entirely new view of how particles are accelerated near the sun and how they travel into interplanetary space by making the first images of the sky at very low radio frequencies from 20 Mhz to below 1 Mhz,” Kasper said. “The jury is still out on what accelerates the particles and where that acceleration occurs.

“It turns out the various theories about particle acceleration correspond to different parts of coronal mass ejections. So if we can see which part of the CME is glowing in radio, we figure out which acceleration model is right.”

Not all CMEs release high-energy particle radiation. During the peak period of the solar cycle, though, major ones that do happen every couple months. At their worst, these can include as much plasma and radiation as there is water in the Great Lakes—accelerating from rest to roughly 3 million miles per hour in tens of minutes.

Those events include several components—magnetized plasma from the sun itself, and the radiation. Both are threatening to Earth, not only to astronauts and spacecraft, but also to the electrical grid.

We have some ability to forecast when the magnetized plasma will hit Earth, since that component takes tens of hours or days to get here. But, as the radiation travels at near-light speed, there’s no way to predict when and where it will arrive.

“Knowing which part of a coronal mass ejection is responsible for producing the particle radiation will help us understand how the acceleration happens,” Kasper said. “It could also result in a unique warning system for whether an event will both produce radiation and release that radiation towards Earth or spacefaring astronauts.”

The bulk of that funding for the project will go toward payload and launch, while $5 million will go to U-M for its science team and operating costs. NASA’s Jet Propulsion Laboratory will manage the mission. Space Dynamics Laboratory, a nonprofit research corporation, is the other major partner that will build the spacecraft. U-M and JPL have partnered with MAXAR, a communications satellite company to launch and place the cubesats in their orbits.

The concept of utilizing a radio telescope in space is not a new one. But previous concepts for gathering this kind of data have been cost prohibitive. For example, it would be impossible to build and launch a 10-kilometer diameter dish into space.

SunRISE is one of NASA’s Missions of Opportunity, enabled through its Explorers Program, which provides flight opportunities for PI-led investigations from space.