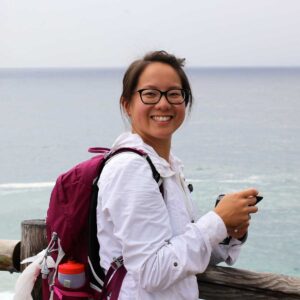 A University of Michigan mathematician is one of 118 early-career researchers selected to receive a 2022 Sloan Research Fellowship.

Charlotte Chan, an assistant professor in the U-M Department of Mathematics, was awarded the fellowship for her work in representation theory, the study of symmetries using linear algebra.

“How can we use polynomials (algebraic geometry) to produce spaces with symmetries (representation theory) to understand phenomena about prime numbers (number theory)?” Chan said. “This is an old question, with lots of rich history and exciting new developments. It’s a privilege to get to explore this picture—even seeing one new link is very invigorating.”

Awarded annually by the Alfred P. Sloan Foundation since 1955, the fellowships honor extraordinary U.S. and Canadian researchers whose creativity, innovation and research accomplishments make them stand out as the next generation of leaders.

Candidates must be nominated by their fellow scientists and winners are selected by independent panels of senior scholars on the basis of a candidate’s research accomplishments, creativity and potential to become a leader in their field. More than 1,000 researchers are nominated each year for 118 fellowship slots. Winners receive a two-year, $75,000 fellowship that can be used flexibly to advance the fellow’s research.

“My favorite aspect of mathematics is when a ‘dictionary,’ or correspondence, between two different areas allows one to gain new perspective, for example by translating difficult questions on one side into tractable questions on the other side,” Chan said. “It is an honor to be selected as a Sloan Research Fellow. I’m excited to pursue new ideas and new directions, with the flexibility and support provided by this fellowship.”

A Sloan Research Fellowship is one of the most prestigious awards available to young researchers, in part because so many past fellows have gone on to become towering figures in science. Renowned physicists Richard Feynman and Murray Gell-Mann were Sloan Research Fellows, as was mathematician John Nash, one of the fathers of modern game theory. For five of the past six years, the recipients of the Nobel Prize in Physics have included former Fellows—Andrea Ghez (2020), James Peebles (2019), Donna Strickland (2018), Kip Thorne (2017) and Duncan Haldane (2016).

In fact, 53 fellows have received a Nobel Prize in their respective field, 17 have won the Fields Medal in mathematics, 69 have received the National Medal of Science and 22 have won the John Bates Clark Medal in economics, including every winner since 2007.

Fellows from the 2022 cohort are drawn from a diverse range of 51 institutions across the U.S. and Canada, from large public university systems to Ivy League institutions to small liberal arts colleges.