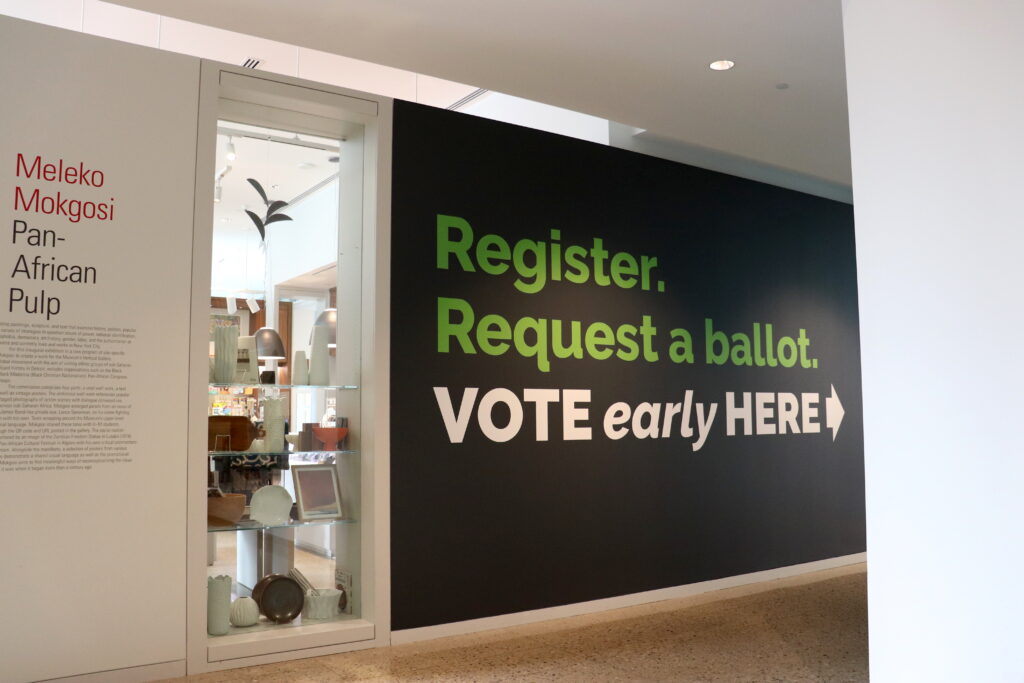 Starting this week, the University of Michigan community will be able to register to vote and cast early in-person absentee ballots on campus.

Several units at U-M have partnered with the city of Ann Arbor to transform a gallery space at the U-M Museum of Art into the state’s first satellite city clerk’s office located on a university campus. It will open on National Voter Registration Day Sept. 22 and remain open until Nov. 3, with absentee ballots available beginning Sept. 24.

“The work that we do lies at the intersection of art and design and civic engagement, so we were thrilled that so many people were able to come together during this time to make this happen at UMMA,” said Rowden, who worked on a student voting campaign with Smotrich during the last election.

According to Edie Goldenberg, a professor of public policy at the Ford School who collaborated in the effort, the passing of Proposal 3 in Michigan’s 2018 election will make the confusing process for students—many of whom are voting for the first time—much easier.

“I think that this is a real game-changer,” said Goldenberg, who founded Turn Up Turnout in 2017.

The result will be very important—the office will essentially create a one-stop shop where students can register or update their addresses, pick up an absentee ballot, fill it out and then turn it in
Edie Goldenberg

“The result will be very important—the office will essentially create a one-stop shop where students can register or update their addresses, pick up an absentee ballot, fill it out and then turn it in,” she said.

Offering a prominent gallery space for the satellite office continues a year-long focus on civic duty and engagement for UMMA, which has presented a series of related exhibitions and programs over the last 10 months. It also aligns with plans for U-M’s Democracy and Debate theme semester.

“Art museums, and campus art museums especially, are uniquely positioned to drive national dialogue around the issues that matter most in the world today,” said Christina Olsen, director of UMMA. “We’ve been working to make good on that potential all year and we are excited to work with these partners to offer our space to the city of Ann Arbor to transform the museum into a true election hub and powerful site for democracy.”

Rowden and Smotrich worked in partnership with Goldenberg, UMMA’s Briannon Cierpilowski and James Leija, the U-M Government Relations Office and the Ann Arbor City Clerk’s Office to secure an office on campus. They also designed the space, which included signage for wayfinding and communications.

“Our goal was to make it very clear, easy and safe for students to vote,” Smotrich said. “We were able to transform a city clerk’s office, which is traditionally a bureaucratic, institutional space, into something that is beautiful and dynamic—we hope that seeing this space will inspire students to vote.”

Ann Arbor City Clerk Jacqueline Beaudry says the office is an extension of a great partnership that Ann Arbor and U-M have had for many years.

“This was a natural fit. As a community, we have been a leader in student voting rights for many years, as there are already several polling stations located in campus buildings,” Beaudry said. “We are excited to be filling this need for our community, and our hope is that we will continue to collaborate during even year November elections in order to create ongoing access for voters at U-M and in Ann Arbor.”

In alignment with campus COVID-19 protocols, the satellite office in UMMA’s first floor Stenn Gallery (525 S. State St.) is exclusively for U-M students, faculty and staff who plan to vote in Ann Arbor. A valid M-Card is required for entry. The general public is encouraged to visit the Ann Arbor City Clerk’s Office (301 E. Huron St.).