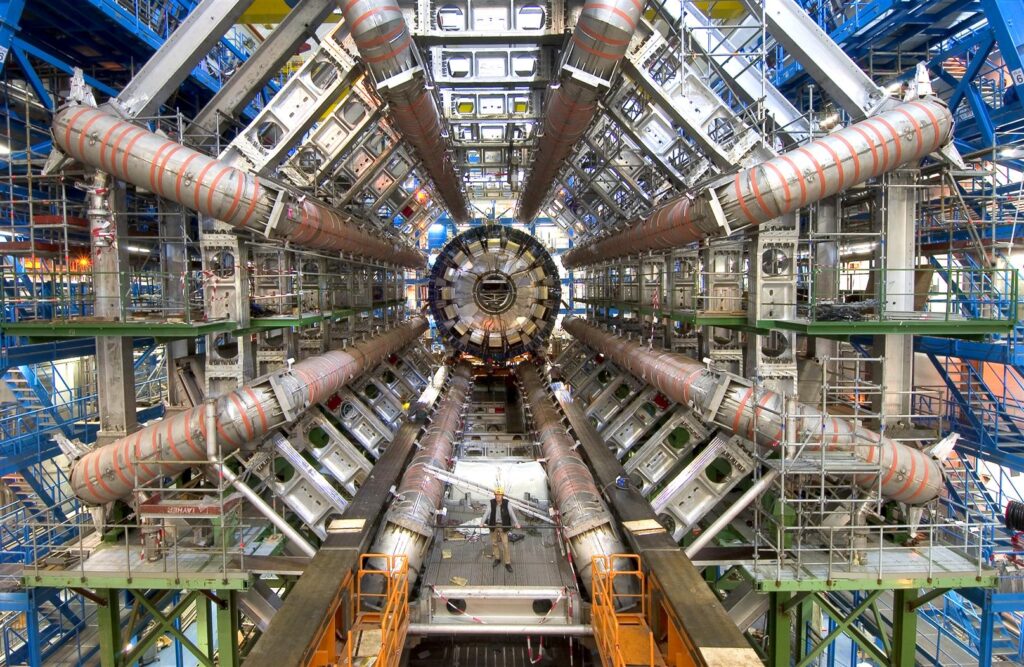 The Large Hadron Collider is the world’s largest particle accelerator, operated by CERN, the European Organization for Nuclear Research (in French, the Conseil Européen pour la Recherche Nucléaire). Specifically, the researchers will be working on what’s called the high luminosity upgrade of the ATLAS detector at the facility. These efforts will provide more intense proton-proton collisions and the upgrade in computing needed to detect the results of those collisions.

U-M physicists Tom Schwarz, Bing Zhou and Junjie Zhu are significantly contributing to an upgrade of one of the most important systems of the ATLAS detector, the muon spectrometer. The muon is an elementary particle similar to an electron but about 200 times heavier. It’s a very important decay product of many rare and interesting physics processes—including those involving the Higgs Boson, a particle previously discovered at CERN that gives objects mass.

“The collider will be producing a billion collisions in a second,” Schwarz said. “To detect these collisions, you have to have really high-speed electronics that can also survive the harsh radiation conditions inside the collider, and very precise detectors to detect and measure the vast number of particles produced in these messy interactions.”

Schwarz and Zhu are building two separate components of radiation-resistant high-speed electronics for the readout of these muon detections, and Zhou is leading the construction of new precision detectors for the tracking of the muon, produced in high-energy collisions.

In addition to their work at U-M, all three physicists are involved in leadership roles within the ATLAS experiment. Schwarz is leading the overall U.S. High Luminosity-Large Hadron Collider upgrade of the ATLAS muon spectrometer, a $20 million effort funded by the NSF that includes five U.S. institutions. Zhou leads the U.S. operations program for the precision muon detector system, and Zhu is leading the ATLAS-wide HL-LHC upgrade of front-end electronics for the precision muon detector system.

The Large Hadron Collider uses superconducting electromagnets to accelerate protons around a 17-mile track, and smashes the protons together at an energy level of up to 13 TeV, or teraelectronvolts. When those protons smash together, they break apart into their constituent parts. Researchers record both how these protons break apart and what those constituent parts are.

Colliding protons at these energies allows scientists to reproduce the conditions of the universe 1/100th of a billionth of a second after the Big Bang. By studying these collisions, scientists at the LHC hope to answer fundamental questions about the nature of the universe, such as why do particles have mass, why is there far more matter than antimatter and what is the nature of dark matter?

As scientists increase the intensity of these collisions, the equipment needed to detect and record these collisions needs to be upgraded to be both resistant to the radiation produced by these more powerful collisions and precise enough to capture the faster, more intense outcome of the collisions.

“There are lots of challenges ahead of us for the design and integration of front-end electronics,” Zhu said. “However, the upgraded electronics will allow us to efficiently select interesting collisions and thus will greatly improve the detector’s capability for discovering new physics.”