University of Michigan musicologist Mark Clague is one of the nation’s foremost experts on “The Star-Spangled Banner,” among many other facets of American music.

This week, Clague, an associate professor at the U-M School of Music, Theatre & Dance, participated in a conversation about the history of “The Star-Spangled Banner” alongside Naomi André, U-M LSA professor and musicologist, and Louise Toppin, professor of voice at SMTD. The programming is part of a newly announced theme semester at U-M focusing on democracy. 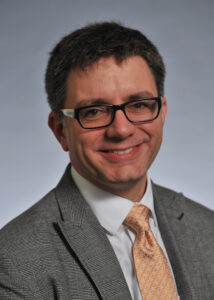 As Independence Day approaches, Clague is available to speak with journalists about topics covered in the conversation, including the history of the U.S. national anthem, the significance of “The Star-Spangled Banner” and its place in the history of American music and protest. Contact: 734-647-9416, claguem@umich.edu.

You often talk about the fact that there is not an “official” version of the national anthem. Can you elaborate?

In the 19th century, the music and words known today as “The Star-Spangled Banner,” were deeply associated with American identity, but it was just one of many patriotic songs. It was used by Americans as the main anthem following the U.S. Civil War but didn’t become official until 1931. The anthem Americans hear so often is set to the tune of an English musicians’ club anthem titled “To Anacreon in Heaven” with music by the composer John Stafford Smith. Francis Scott Key wrote only the lyrics, but he imagined them to a tune he already knew well. His words are thus song lyrics and were never just a poem. Many of America’s patriotic songs are part of this kind of ongoing lyrical dialogue or “broadside ballad tradition,” where new lyrics were written to well-known tunes and then published in newspapers. “My Country, Tis of Thee” is another of these—it’s written to the tune of “God Save the King.”

How many different versions of the “The Star-Spangled Banner” exist?

I’ve identified more than 200 different lyrics sung to the tune we know as “The Star-Spangled Banner.” They might be presidential campaign songs or be used to celebrate a holiday. Many comment on social issues, such as the right of women to vote or the evils of alcohol. “The Star-Spangled Banner” is not at all the first such lyric chronologically, but Key’s words deepened the association of the melody with U.S. politics. By far the most powerful of these other lyrics is the 1844 anti-slavery lyric “Oh Say, Do You Hear?” by E.A. Atlee, a Baptist minister. It’s a great example of the melody’s potential for protest. It was first published on July 22, 1844, in the “Signal of Liberty,” an abolitionist newspaper in Ann Arbor, and later that same year on Sept. 13 in William Lloyd Garrison’s more famous national anti-slavery paper “The Liberator.” 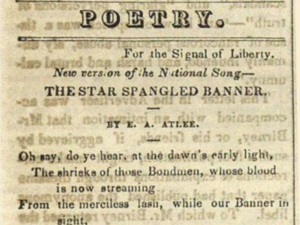 How does Atlee’s version of the “Abolitionist Star-Spangled Banner” represent some of the ongoing civil rights struggles we see today?

“The Star-Spangled Banner” has been used as a vehicle for protest throughout its history. We tend to treat it as an immutable object today, but over the course of the past 200 years it has functioned more as a verb than a noun—that is, as an improvisational act of citizenship and not a sacred icon. Atlee’s words, for example, echo Key’s own, creating a recriminating tension between his graphic descriptions of slavery’s inhuman bondage on one hand and the ideal of freedom celebrated in “The Star-Spangled Banner,” on the other. Atlee’s lyric questions how a nation that enslaves some four million people can in any sense be a “land of the free” at all? The lyrical dissonance here is in effect a call for the abolition of slavery.

Colin Kaepernick was thus not doing something radical when he politicized the anthem. It has been used for protest for more than two centuries. By kneeling, Kaepernick draws attention to the disconnect between the nation’s ideals celebrated in Key’s lyric and the experience of many Black citizens who are denied access to the full benefits of liberty and equality. Many Black artists have used the banner for protest, most famously Jimi Hendrix at Woodstock (1969) in a performance that was both patriotic and critical. In 2008, blues singer Reneé Marie sang the anthem, substituting the words of the Black national anthem “Lift Every Voice and Sing” for Key’s lyric. Marie created an uproar.

Listen to and read more about “Oh Say, Can You Hear?” on the Star Spangled Music Foundation’s blog. The song is one of 36 tracks that are part of the Poets and Patriots recording project, produced by Clague in 2014.