There are photos of bystanders looking up in disbelief, exasperated first responders standing among the rubble and scores of people running from the wreckage as the smoke trails behind them. There are even some who look as if they’re going about an ordinary day—riding a bicycle or on rollerblades—though complete devastation surrounds them.

In a pre-social media era, we watched many of the apocalyptic scenes unfold on our TV screens or in newspapers as two hijacked airplanes crashed into the north and south towers of the World Trade Center on Sept. 11, 2001. 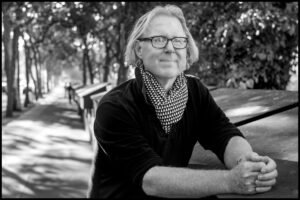 David Turnley is an award-winning photographer and U-M professor who documented the first responders on Sept. 11, 2001. Image credit: David Turnley.

A new photographic documentary released this week by Pulitzer Prize-winning photographer and University of Michigan professor David Turnley offers new close-up encounters of the moments before both towers fell, and the immediate aftermath.

Turnley is a professor at the U-M Residential College and the Penny W. Stamps School of Art & Design. For the past 40 years, he has covered most of the world’s major events, uprisings and wars—including the Persian Gulf War, the struggle to end apartheid, revolutions in Eastern Europe and the disintegration of the Soviet Union, to name a few.

“It was a gorgeous blue sky morning, and I was in the shower on West 10th Street in New York’s West Village when I heard what sounded like a train wreck. I moved to the city in the late ’90s after 20 years of covering war all over the world,” wrote Turnley, in a recent Instagram post. “After getting dressed for an appointment, I walked out the door to see the first twin tower in flames. I grabbed my cameras—and 20 rolls of film—and by the time I returned to head down to the World Trade Center, another plane had just hit the second tower. ­­War had followed me.”

On that day, Turnley rushed to the site just two blocks away from his home, where he photographed the collapse of both towers before heading into the rubble with the first firefighters and police officers that responded to the scene.

According to Turnley, many of the photos he is releasing as part of his new video—set to Bruce Springsteen’s “Lift Me Up”—have remained in his personal archive until this week. He is also posting a six-day series on Instagram (@davidturnley), where he’ll release 60 more photos leading up to the 20th anniversary of the attacks.