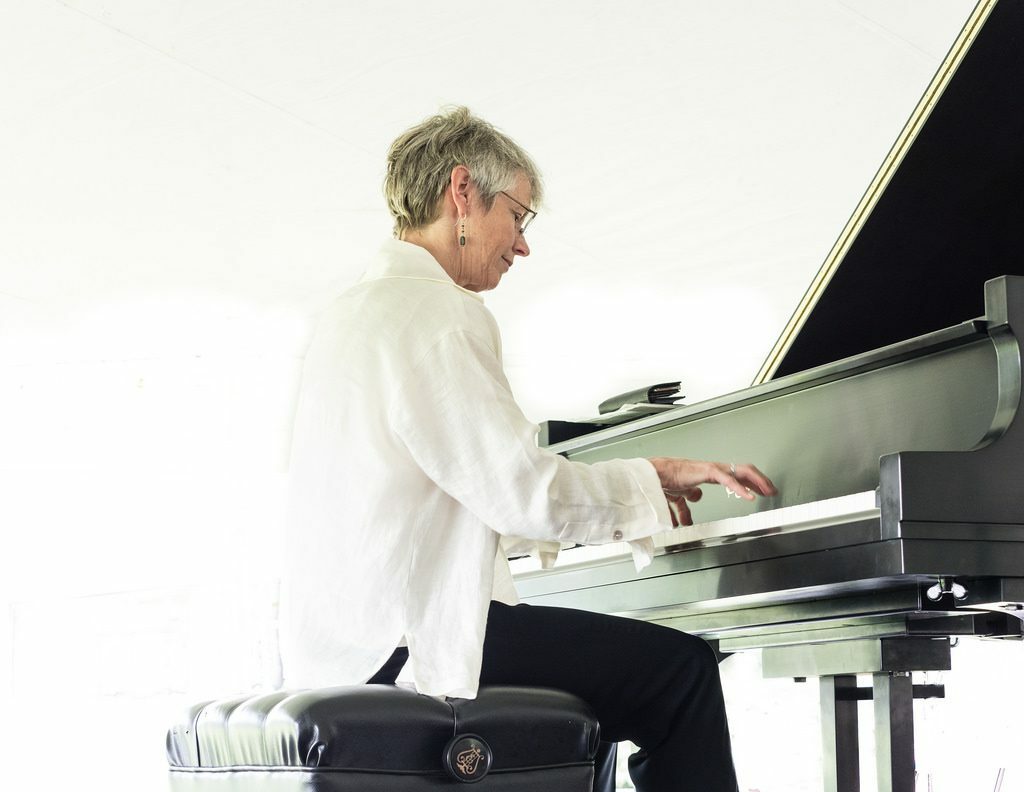 ANN ARBOR—When Ellen Rowe was a young girl growing up in Ridgefield, Connecticut, there weren’t many women making jazz music.

Through her success as a world-renowned jazz pianist, composer and pedagogue, she’s spent the better part of the last 35 years trying to change that.

Her latest effort comes in the form of a new album titled “Momentum—Portraits of Women In Motion.” According to Rowe, the album features eight tracks, each an ode to women who have personally inspired her throughout the years.

While a couple of songs were dedicated to women who influenced Rowe musically, many of the women who served as inspiration for the album were heroes in other areas, including social justice, sports, environmental advocacy and politics.

“I really wanted to create music that had a social cause tied to it,” said Rowe, a jazz professor at the U-M School of Music, Theatre & Dance who wrote the bulk of “Momentum” in 2017 against the backdrop of the #MeToo movement and the Women’s March.

In fact, Rowe wrote one of the tracks on the album, titled “The First Lady (No, Not You Melania),” immediately after Donald Trump’s inauguration.

“Michelle Obama was, and is, the epitome of class and grace and a very powerful role model for young women everywhere,” Rowe said. “I really felt the need to celebrate her in that moment.”

The opening track “Ain’t I a Woman” serves as a “hymn to all the unsung heroines of the civil rights movement” including women like Mary Bethune Cook, Septima Clark and Fannie Lou Hamer. “The Guardians” is a heartfelt tribute to conservationists and environmental advocates Dian Fossey and Jane Goodall. “Anthem” was inspired by Rowe’s teen years and her love for piano-playing folk-rock giants Carole King and Joni Mitchell.

“A major focus of this project has been mentorship, trying to get more young women involved in jazz. We’ve come a long way since I was young, but I still think we’ve got a long way to go”

Yet other tracks were written for women that had more of a personal connection to Rowe—”Song of the Meadowlark” was written for her mother; “R.F.P. (Relentless Forward Progress)” was created as an homage to great female distance runners like Joan Benoit Samuelson and Meghan Canfield Laws, who has also served as one of Rowe’s running coaches; and “The Soul Keepers” was written in honor of her friend and U-M colleague, the late Detroit jazz legend Geri Allen.

“That song was special to me not only because Geri was a dear friend, but also because she was a leader in the movement to support and encourage more young women to play jazz,” Rowe said. “I attempted to combine some of Geri’s angular harmonies with the boogie-woogie style of her biggest influence, Mary Lou Williams.”

In keeping with the theme of the album, all performers that make up the Ellen Rowe Octet—along with guests—are women.

The album was released by Smokin’ Sleddog Records in January 2019 and is available through Rowe’s website. Rowe will also use the album as the basis for upcoming music clinics and presentations.

“A major focus of this project has been mentorship, trying to get more young women involved in jazz,” said Rowe, whose former student Melissa Gardiner played with her on the record. “We’ve come a long way since I was young, but I still think we’ve got a long way to go”