U-M ranked No. 8 in nation for size of international student body 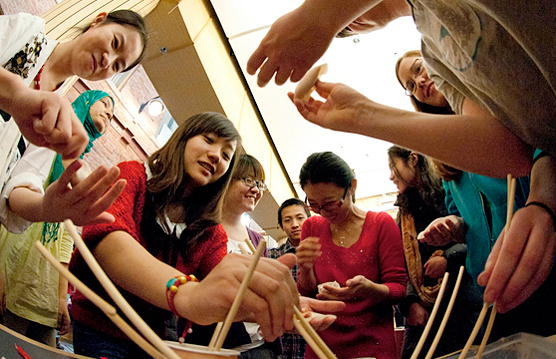 Student met in the Dana Building’s Ford commons to celebrate the Lunar New year, with a feast of homemade dumplings and other treats. Image courtesy of the U-M School of Natural ResourcesANN ARBOR—The University of Michigan had the eighth-largest international student body in the U.S. in 2011-12 and was ranked No. 16 for the number of students studying abroad, a new survey says.

The rankings were in the Open Doors report by the Institute of International Education. The New York-based nonprofit group said enrollment of international students in 2011-12 grew to a record-breaking 764,495 nationwide—a 5.7 percent increase from the year before.

The annual report released this week has consistently ranked U-M as one of the most sought-after destinations for international students who want to study at a leading American university.

“International students strengthen Michigan, with their ideas and their experiences,” U-M President Mary Sue Coleman said. “They bring a new perspective. They demonstrate why we must pursue true, bilateral partnerships to succeed and thrive as a great institution.”

U-M had a total 6,382 international students in 2011-12, a 14 percent jump from the previous period. The university’s No. 8 ranking in the category was unchanged from last year.

The report also shows that U-M held onto its No. 16 ranking in the study abroad category for the second straight year. The university had 1,946 students studying overseas, slightly fewer than the 1,975 in the previous period.

The strong showing by U-M highlights the value the university places on global engagement. The university not only encourages students and faculty to go abroad and explore the world, it also strives to bring the world to U-M by attracting talented students from overseas.

In the study abroad category, NYU led the nation with 3,799 students, while Michigan State University was second (2,577) and University of Minnesota was third (2,562).

The report is published annually by the independent, not-for-profit IIE in partnership with the U.S. Department of State.