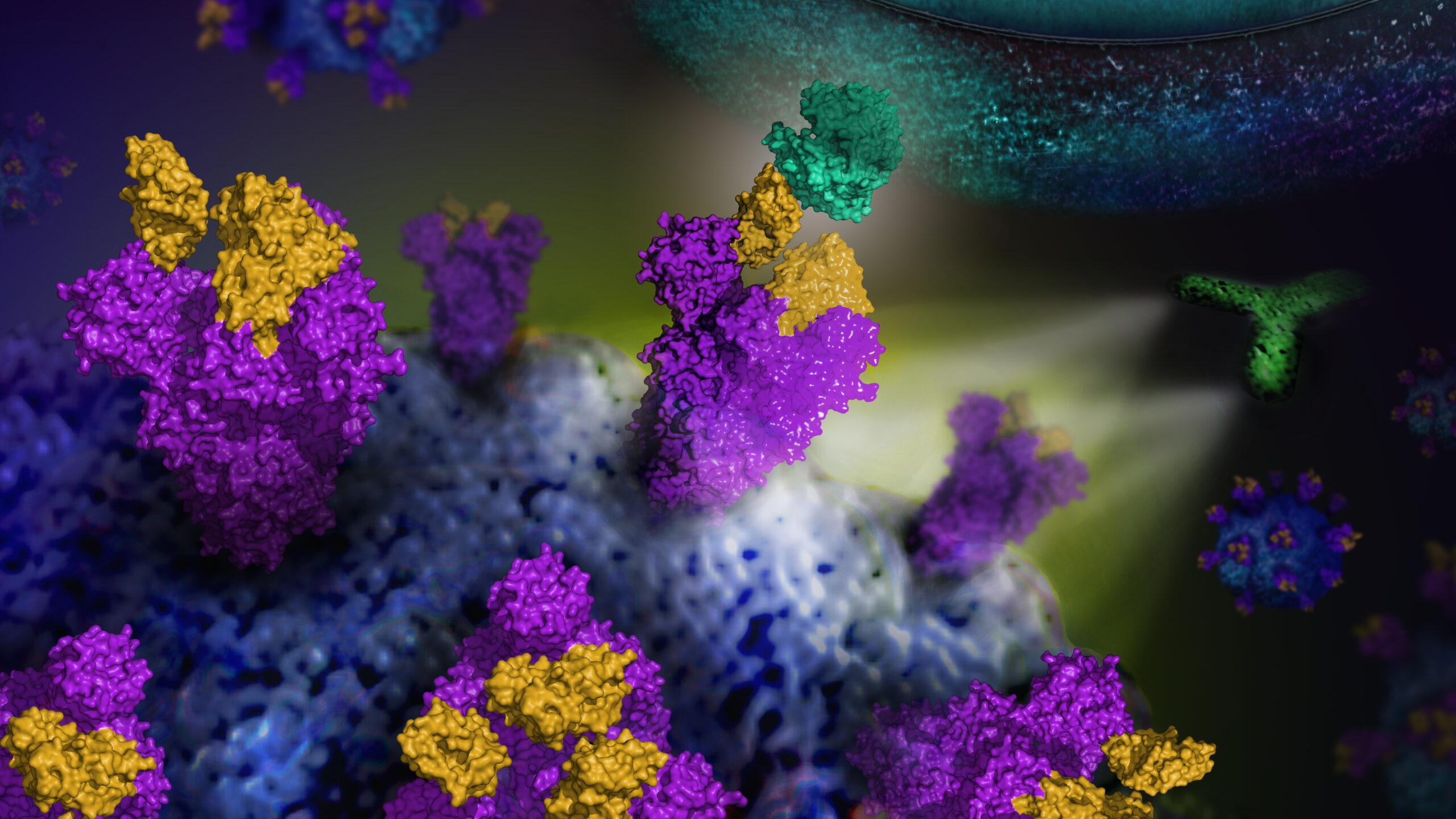 Representation of the SARS-CoV-2 spike protein binding to the human ACE2 receptor protein, with an anti-SARs-CoV-2 antibody in the background. Illustration by Life Sciences Institute multimedia designer Rajani Arora.

ANN ARBOR—Scientists at the University of Michigan are advancing new antibody tests to identify people who have been infected with the novel coronavirus that causes the COVID-19 disease. The tests, being validated now, could accelerate selection of patient plasma for use in treating new COVID-19 infections.

Antibody tests, also called serological tests, search blood serum for evidence that an individual has been infected with a virus. If a person is infected by a virus, their immune system produces specialized antibody proteins that are uniquely equipped to fight off that specific virus—in this case, the SARS-CoV-2 virus. When the serum from a person who was infected with COVID-19 is applied to a small portion or fragment of viral protein immobilized on a solid surface, the serological test will reveal these specialized antibodies.

If accurate and widely available, COVID-19 antibody tests could not only aid in selecting serum for patient treatments, but also help determine the true rate of infection and measure the spread of the virus and disease.

Although COVID-19 antibody tests have already hit the market, some are proving too inaccurate in analytical validation studies to be useful for clinical care or epidemiologic studies. Researchers and clinical laboratorians across academia, industry and the government—including several teams based at U-M—are now mobilizing to create and validate better tests.

Following a protocol developed at the Icahn School of Medicine at Mount Sinai, researchers from the U-M Life Sciences Institute, School of Public Health and the Michigan Medicine Department of Pathology have teamed up to establish test reagent production at the University of Michigan—with the goal of wider distribution not only in Michigan, but in in developing nations. A broader array of reliable serology assays could alleviate or even prevent supply chain issues, which have proven to be an obstacle for expanding SARS-CoV-2 molecular testing capacity across the country.

The antibody test protocol focuses on the spike proteins from the SARS-CoV-2 virus—the proteins on the outer surface of the virus that allow it to enter our cells, but which are not infectious on their own.

Scientists in the Life Sciences Institute’s Center for Structural Biology are now optimizing production of both the complete spike protein and an area at just the very tip of that spike, called the receptor-binding domain.

That domain in particular is the part of the spike that is recognized by human cells—and that recognition allows the virus to enter the cells in the airway. It also is the portion of the spike that shows the greatest genetic variation from other coronaviruses, which could be the key to developing highly specific antibody tests.

“There are two main characteristics that are most important for these tests, the first is sensitivity, or how many antibodies must be present before the test can detect them. But much more important is selectivity—the test’s ability to pick up only antibodies that would fight this specific coronavirus and not some other virus.”

“There are two main characteristics that are most important for these tests,” explained Janet Smith, professor at the Life Sciences Institute and director of the Center for Structural Biology. “The first is sensitivity, or how many antibodies must be present before the test can detect them. But much more important is selectivity—the test’s ability to pick up only antibodies that would fight this specific coronavirus and not some other virus.” 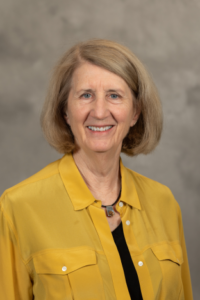 The spike proteins produced in the Center for Structural Biology are now being put to the test by a team of epidemiologists from the School of Public Health and the faculty and staff in the Special Chemistry Section of the Clinical Core Laboratory in the Department of Pathology at Michigan Medicine.

They have begun testing sera collected before the COVID-19 outbreak, to ensure the tests do not produce positive results in individuals never infected with SARS-CoV-2. Serum from patients who tested positive for COVID-19 by a molecular assay is also being tested to confirm the sensitivity of the assay in the detection of antibody in recovering infected individuals. Performance of this lab-developed test is being compared to the performance of high-throughput commercially validated assays that are now slowly becoming available in the United States.

“This work is helping to advance the science of antibody testing at a time when it is urgently needed,” said DuBois Bowman, dean of the School of Public Health. “Ensuring accurate, widely available antibody testing is an essential step in determining the cumulative impact of the virus, understanding more about immunity, and ultimately gaining control over this pandemic.”

High selectivity is particularly important when testing extremely large populations, which is the ultimate goal of this effort.

If the results of these tests demonstrate that the test is both selective and sensitive enough, biotechnology companies may be able to use this protocol to mass-produce tests. But this type of commercial, large-scale testing will be less feasible in developing countries, said Aubree Gordon, associate professor epidemiology at the U-M School of Public Health.

With a new grant from Open Philanthropy, the U-M team is now scaling up protein production to help close this testing gap.

Gordon already works with several countries in Latin America, including Ecuador, which has been particularly hard-hit by COVID-19. While many of these countries have the facilities needed to run these tests, they lack capacity to mass-produce the proteins and tests at higher levels.

“Open Philanthropy is very interested in helping as many people as possible, which in this case means scientific advances that can improve health outcomes globally,” Gordon said. “And so, with their support, we’re hoping to produce proteins that can be used where other sources of tests are less available.”

In addition to ongoing validation testing in Michigan, the team has begun to send some tests to national labs in Ecuador and Nicaragua. They hope to expand to Honduras and additional Latin America countries in the future.