ANN ARBOR—A University of Michigan-led team of geologists and engineers is mapping surface ruptures and some of the tens of thousands of landslides triggered by last month’s magnitude-7.8 earthquake in New Zealand.

The U-M-led team includes a researcher from the University of Colorado at Boulder. Working in collaboration with scientists from New Zealand’s GNS Science and the U.S. Geological Survey, they will combine observations collected by satellites, drones, helicopters and on foot to create what is expected to be the largest inventory of earthquake-triggered landslides, according to team leader and U-M geologist Marin Clark.

The high-resolution digital topographic maps the researchers create will help response teams in New Zealand determine which landslides pose the greatest threat for future sliding and for river damming that can lead to catastrophic flooding. The project is also viewed as a training exercise for future large earthquakes anticipated in places like Southern California. 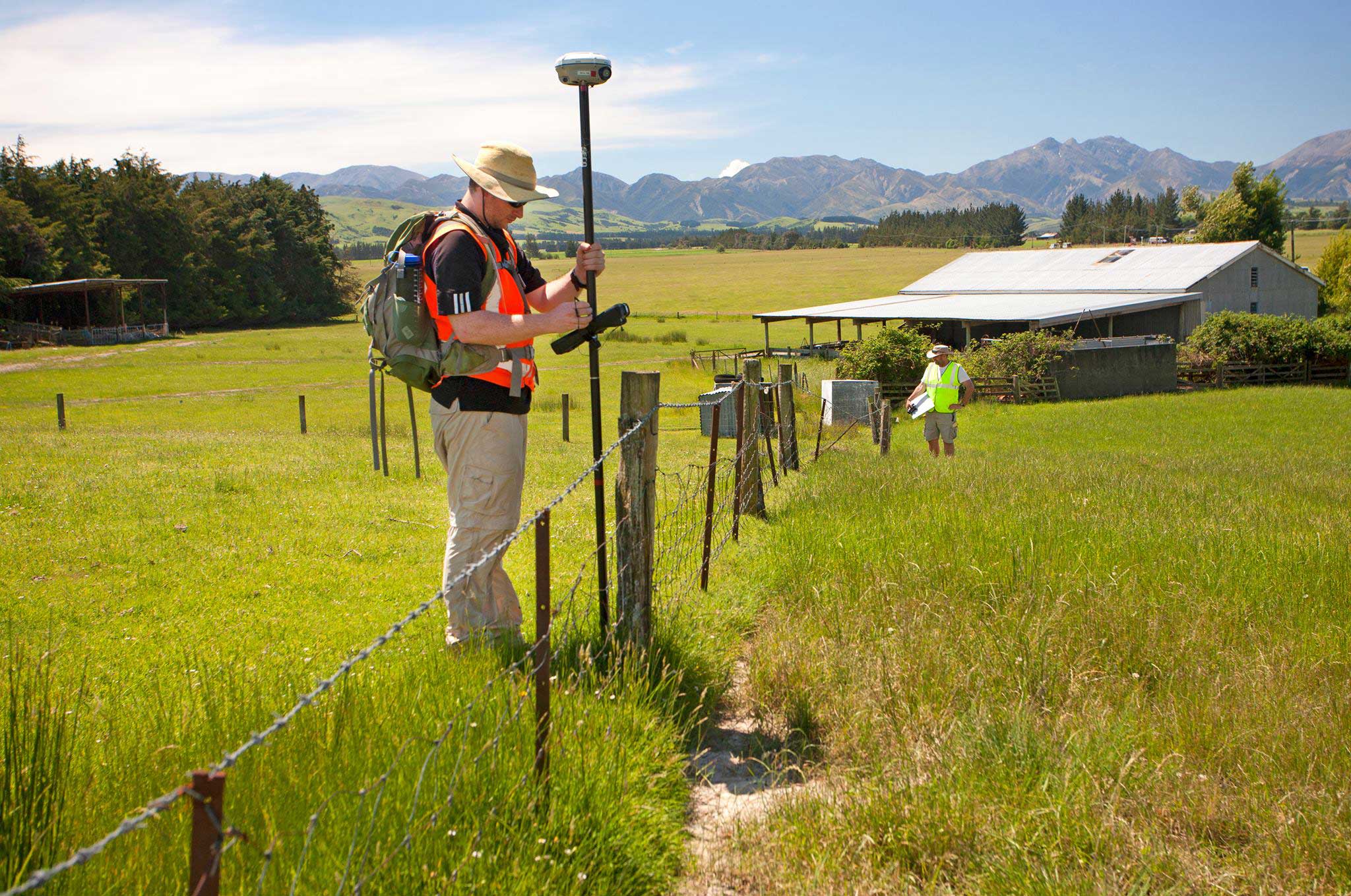 University of Michigan postdoctoral researcher Timothy Stahl uses GPS technology to measure displacement of a fence in New Zealand following November’s magnitude-7.8 earthquake. Fence posts in the mid-ground were moved to the right by motion of the fault during the earthquake. Image credit: Kate PedleyThe powerful New Zealand quake struck Nov. 13 near the town of Kaikoura, on the east coast of the South Island. It killed two people, generated tsunami waves several feet high and stranded hundreds of tourists who had to be evacuated by helicopter and ship.

Current estimates are that 80,000 to 100,000 landslides were triggered by ruptures along at least nine faults. About 150 of the landslides blocked river valleys, and nine are being monitored as potential threats for catastrophic flooding due to river damming.

“If the 100,000 estimate is correct, then this would be the largest documented earthquake-related landsliding event ever, slightly larger than one that occurred in China in 2008,” said Clark, U-M associate professor of earth and environmental sciences.

“The landslide dams are especially important to recognize immediately after an event like this, while there is still time to do something about them. To avoid a potentially catastrophic breach and flooding event, spillways can be constructed to drain the water.”

Three members of the research team went to New Zealand late last month, hiking into the affected region with handheld GPS receivers and using helicopter-based observations and drone imagery to map fault ruptures and landslides. They worked with scientists from GNS Science and the Geotechnical Engineering Extreme Events Reconnaissance Association, a volunteer organization known as GEER.

U-M researcher Adda Athanasopoulos-Zekkos at a fault-rupture site east of Hanmer Springs, New Zealand. Image credit: Joe WartmanU-M scientists who made the reconnaissance trip were Adda Athanasopoulos-Zekkos, associate professor of civil and environmental engineering, and postdoctoral researcher Timothy Stahl of the Department of Earth and Environmental Sciences, who is also an NSF Postdoctoral Fellow. Clark and team member Dimitrios Zekkos, U-M associate professor of civil and environmental engineering, will travel to New Zealand next month.

“Drones have totally changed how our work is done,” said Zekkos, who also used the remotely operated aerial vehicles to map landslides in Nepal—on a team led by Clark—following last year’s magnitude-7.8 earthquake there, which killed more than 8,000 people and created nearly 25,000 landslides.

“Landslides can block roads, and helicopters are expensive to operate and are often needed for other purposes after a natural disaster,” he said. “But you can quickly send a drone into places that would otherwise be practically impossible to see—and you can get really, really close.”

On Dec. 8, Clark’s team received final approval of funding from the National Science Foundation for the year-long New Zealand study. While the amount of “rapid response funding” is modest at $46,516, the NSF award also gives the researchers access to satellite imagery and supercomputers they will use to create exquisitely detailed before-and-after digital maps. 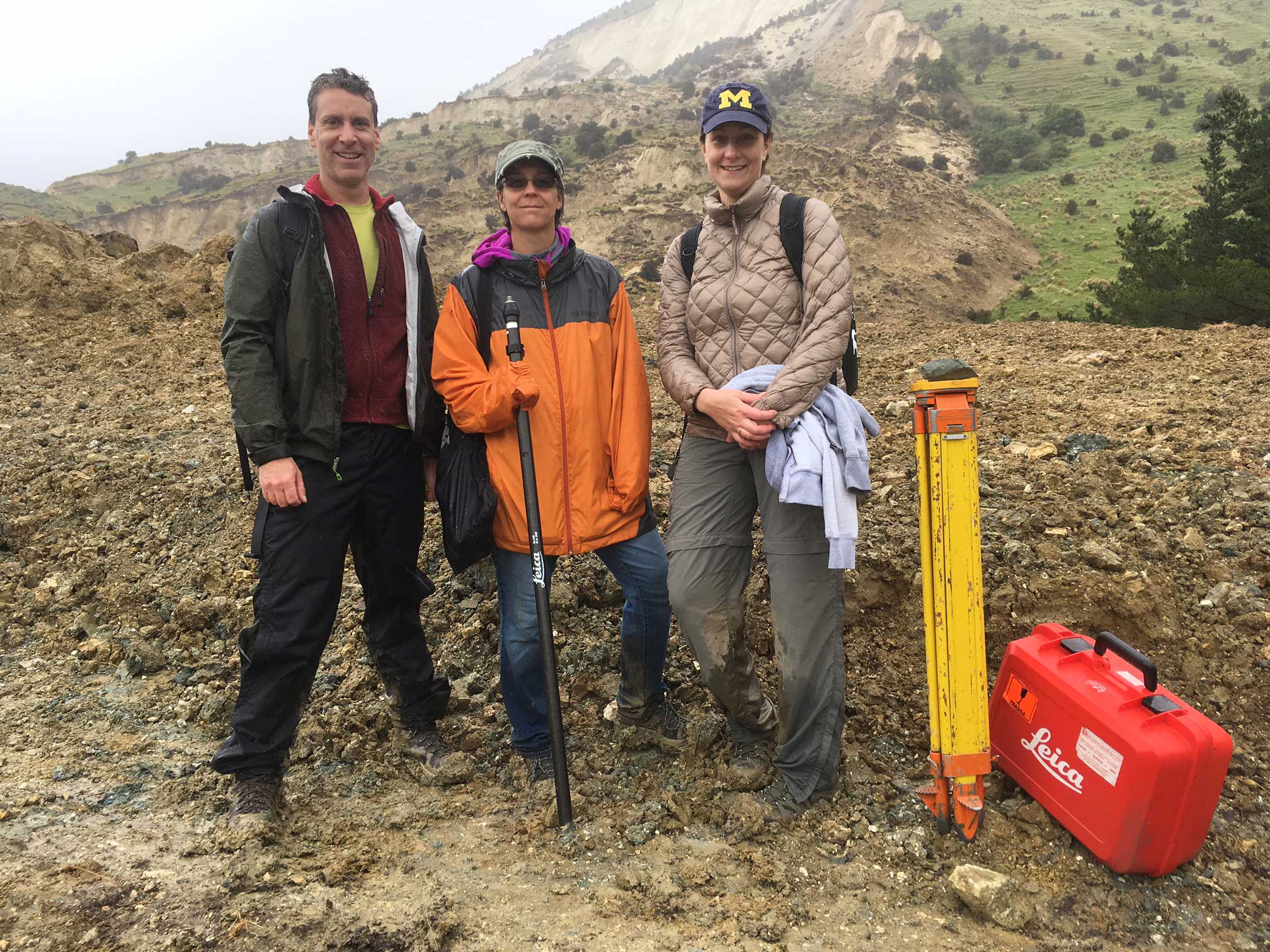 University of Michigan researcher Adda Athanasopoulos-Zekkos, right, in the field in New Zealand with two members of the Geotechnical Engineering Extreme Events Reconnaissance Association, J. Wartman of the University of Washington, left, and E. Rathje of the University of Texas. Image credit: John ManousakisThe team’s study area spans about 25,000 square miles, a region slightly larger than the state of West Virginia. The researchers will have access to stereoscopic satellite imagery of the sparsely populated, mountainous study area gathered both before and after the Nov. 13 Kaikoura earthquake.

The razor-sharp satellite images sample the surface at a 30-centimeter spacing and can recognize objects on the ground as small as 2 meters across, roughly the size of an SUV. In some cases, 1-meter resolution is possible. The pre-quake images were collected by commercial satellite company DigitalGlobe following New Zealand’s 2011 Christchurch earthquake, which killed 185 people.

“What’s unique about this situation is that we’ve never had high-resolution ‘before’ imagery that covers the entire area affected by a major earthquake,” Clark said.

DigitalGlobe is now collecting “after” images of the region affected by last month’s Kaikoura earthquake. Clark’s team will have access to both data sets.

“It’s never been done at this scale at this resolution, so this is going to give us an unprecedented view of the details of what’s happening on the ground,” she said.

Multiple satellite observations of the same ground locations from different viewing angles were combined to create stereoscopic imagery that provides a three-dimensional view of the surface. The 3-D view, in turn, enables researchers to precisely measure the elevation of surface features—including landslides.

“The 3-D models from satellite observations are not as accurate as drone-created models, but they cover much wider areas and are precise enough to measure any vertical change of more than a few tens of centimeters, or roughly the height of a beach ball,” said team member Michael Willis, assistant professor at the University of Colorado.

The satellite imagery will be used to create before-and-after digital elevation models, or DEMs, which can be thought of as extremely detailed digital topographic maps. Techniques used to generate high-resolution DEMs from stereoscopic satellite images were developed by Willis as a member of a team creating such models for the Arctic.

Knowing the exact elevation at a given point before and after a landslide allows scientists to calculate the volume of material that moved, a value that is critical when trying to assess the threat posed now and in the future, Clark said.

“Some of these landslide locations are current threats for damming and catastrophic flooding. And all of them are now more susceptible to future landsliding in response to rains,” she said. “So by knowing exactly where these landslides are and how far they’ve traveled, as well as their volume and composition, we can make better predictions about what might happen in the coming weeks, months and years.” 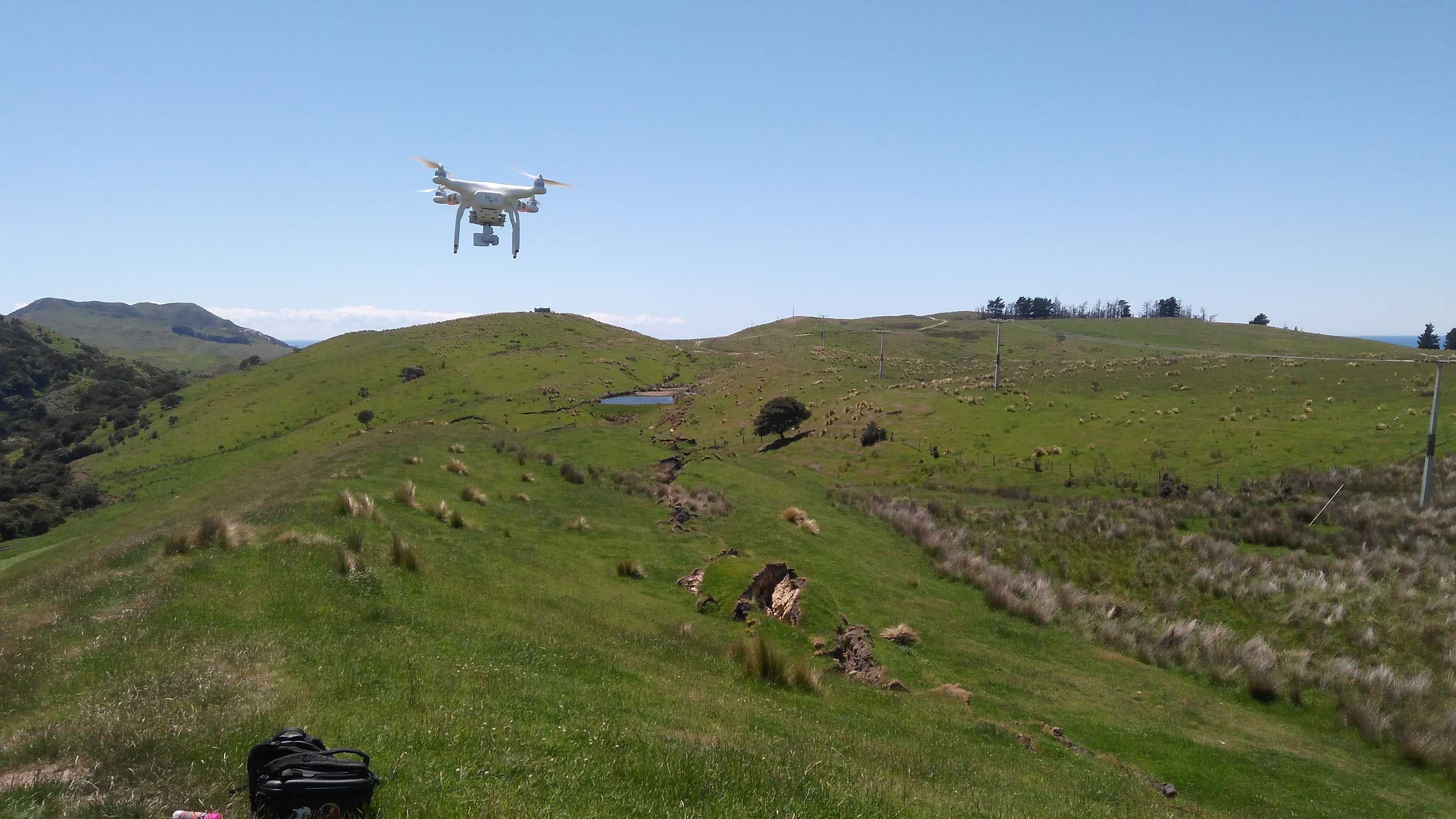 A University of Michigan drone inspecting a fault rupture site in New Zealand. Image credit: John ManousakisData collected on foot and using drones and helicopters will be used to validate the satellite images, a process called ground truthing.

The first DEMs based on the “before” images of the affected region could be finished this month and will be provided to landslide response teams from the U.S. Geological Survey and GNS Science. DEMs based on post-quake satellite imagery could take months to complete, depending on weather and other variables.

The New Zealand project is viewed as a training exercise for future large earthquakes, including an anticipated Southern California event along the San Andreas Fault. In that case, “before” images along the San Andreas have already been collected using plane-mounted LiDAR, a surveying method that measures distance to a target by illuminating it with laser light.

The Nov. 13 New Zealand earthquake resulted from faulting on or near the boundary between the Pacific and Australian tectonic plates. At the location of the magnitude-7.8 earthquake, the Pacific plate is moving west-southwest with respect to the Australian plate at a rate of about 40 millimeters (1.6 inches) per year.