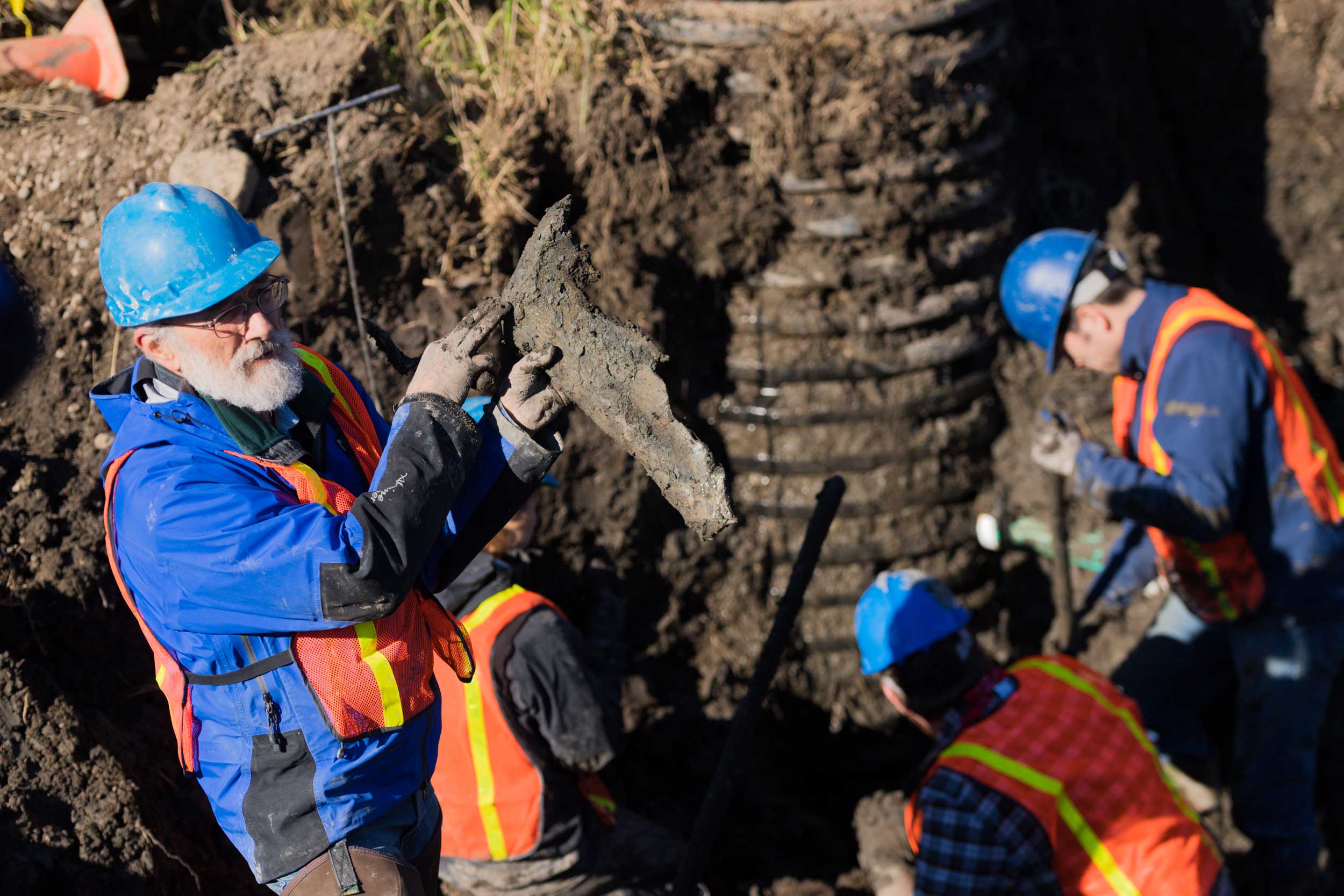 CHELSEA, Mich.—University of Michigan paleontologists conducted a second excavation this week at the Chelsea-area farm where the skull, tusks and dozens of intact bones of an ice age mammoth were pulled from the ground in late 2015.

A U-M news video of the skull and two attached tusks being hoisted from the muddy excavation pit with a backhoe on Oct. 1, 2015, has been viewed more than 875,000 times on YouTube.

Nothing that dramatic happened during the two-day follow-up. But 40 additional bones and bone fragments from the Bristle Mammoth were recovered, and the researchers were able to thoroughly document the site. That just wasn’t possible two years ago, in the one-day rush to get the skull and tusks out of the ground.

“This return to the Bristle site was absolutely a success. We got the kind of information that we need to do the science right, and we were also able to recover an impressive amount of additional material from this animal,” said U-M paleontologist Daniel Fisher, who led both Bristle digs and who is overseeing the analysis of the bones and the environmental samples.

“So I’m confident that as a result of this second excavation, we’ll have more insight into what happened here,” said Fisher, director of the U-M Museum of Paleontology. 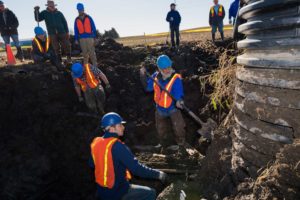 U-M paleontologists Michael Cherney, left, and Daniel Fisher dig for mammoth bones next to a sump pump at a low point in one of farmer James Bristle’s fields. Installation of the drainage system led to the discovery of mammoth bones in 2015.

Bristle’s farm deserved a second visit in part because a single radiocarbon date from one of the mammoth bones showed the animal to be more than 15,000 years old. Also, several lines of evidence point to human processing of the mammoth carcass for food.

If additional studies substantiate those preliminary findings, the Bristle Mammoth “would represent the earliest instance of human interaction with a mammoth in the eastern Great Lakes basin,” Fisher said.

The U-M team had been trying to make a return trip to Bristle’s farm for a while but needed to find a time that worked for Fisher, excavator James Bollinger and farmer James Bristle, who harvested corn from the dig site in October.

“The crops are off, so it’s really a perfect time to do it,” Bristle said Tuesday morning as Bollinger began removing soil from a site directly south of the October 2015 excavation.

“It was such a hurried thing the first time around,” said Bristle, who renamed his farm Mammoth Acres after that find. “So this is an opportunity to complete the discovery process.”The first mammoth bones were discovered while Bristle was installing a drainage system at a low spot in one of his fields. The farmer gave U-M researchers one day to recover whatever remains they could find; after that, the drainage project and his harvest for the year needed to resume.

Bristle later donated the mammoth remains to the university, and some of them are now on display at the U-M Museum of Natural History. This week, additional bones were found in clays that were disturbed in 2015 when a sump pump was installed as part of the drainage project. The newly discovered bones will also be donated to the university, Bristle said.

During the first Bristle dig, 55 to 60 nearly complete mammoth bones were found, accounting for 30 to 40 percent of the animal’s skeletal mass. The animal was a male in its mid-40s and would have weighed about 9 tons. 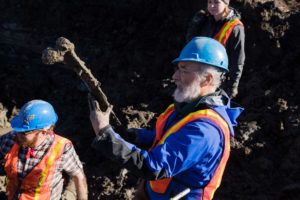 In addition to the skull with teeth and tusks, most of the vertebrae and ribs were found, along with parts of the shoulder blades and the pelvis. Notably missing are the limb and foot bones and the tail vertebrae.

This week, the researchers added 40 more bones and bone fragments, including several vertebrae, skull fragments, an intact rib, part of a shoulder blade, a piece of the pelvis, and what appears to be part of the mandible.

Most of the workers in the muddy pit with Fisher were current or former U-M students. Scott Johnston, a 2017 graduate in the Department of Earth and Environmental Sciences who has worked at the U-M Museum of Natural History since he was 14, found a jagged, softball-sized fragment of the mammoth’s skull on Wednesday.

“I knew immediately that it was skull bone because nothing else looks exactly like it,” Johnston said. “The feeling was pure euphoria.” 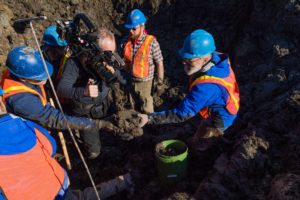 Nichole Lohrke was a double major in German and evolutionary anthropology two years ago when she heard about the Bristle mammoth discovery. A few months later, she went to work in Fisher’s lab, repairing the Bristle tusks and skull. She added a minor in paleontology, graduated last spring, and on Wednesday found a plum-sized piece of the animal’s skull.

“The first Bristle excavation is what inspired me to get into paleontology,” she said. “I heard about it on the news and thought, ‘That is so cool. I would love to be part of that.’ And now I’m here.”

One goal of the second Bristle excavation was to find more bones and, possibly, additional evidence of human involvement. But an even higher priority was to reconstruct the geological context of the mammoth remains, something that simply wasn’t possible during 2015’s get-what-you-can-in-a-day dig. 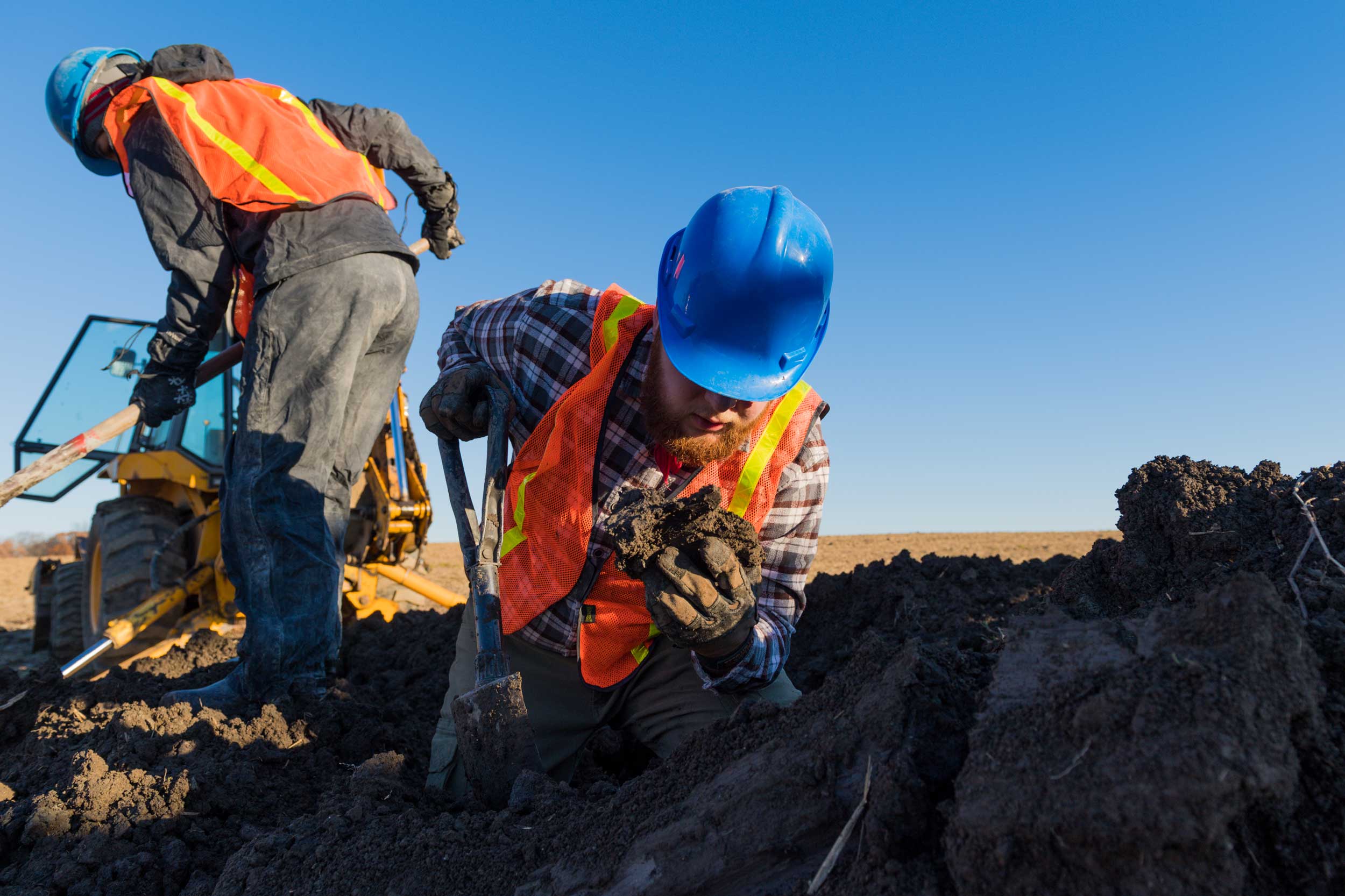 The Bristle bones were found about 10 feet below the current land surface, in fine-grained clays and marls from the bottom of a pond that no longer exists.

On Tuesday of this week, the researchers dug a pit just south of the October 2015 location and collected sediment samples from the layers exposed in one of the walls. They collected samples at 2-inch intervals, from a couple feet below the top of the pit wall to the gravel at its bottom, a distance of about 13 feet. The gravel at the bottom of the pit is from a time 17,000 to 18,000 years ago, when glacial ice still covered the region, Fisher said. 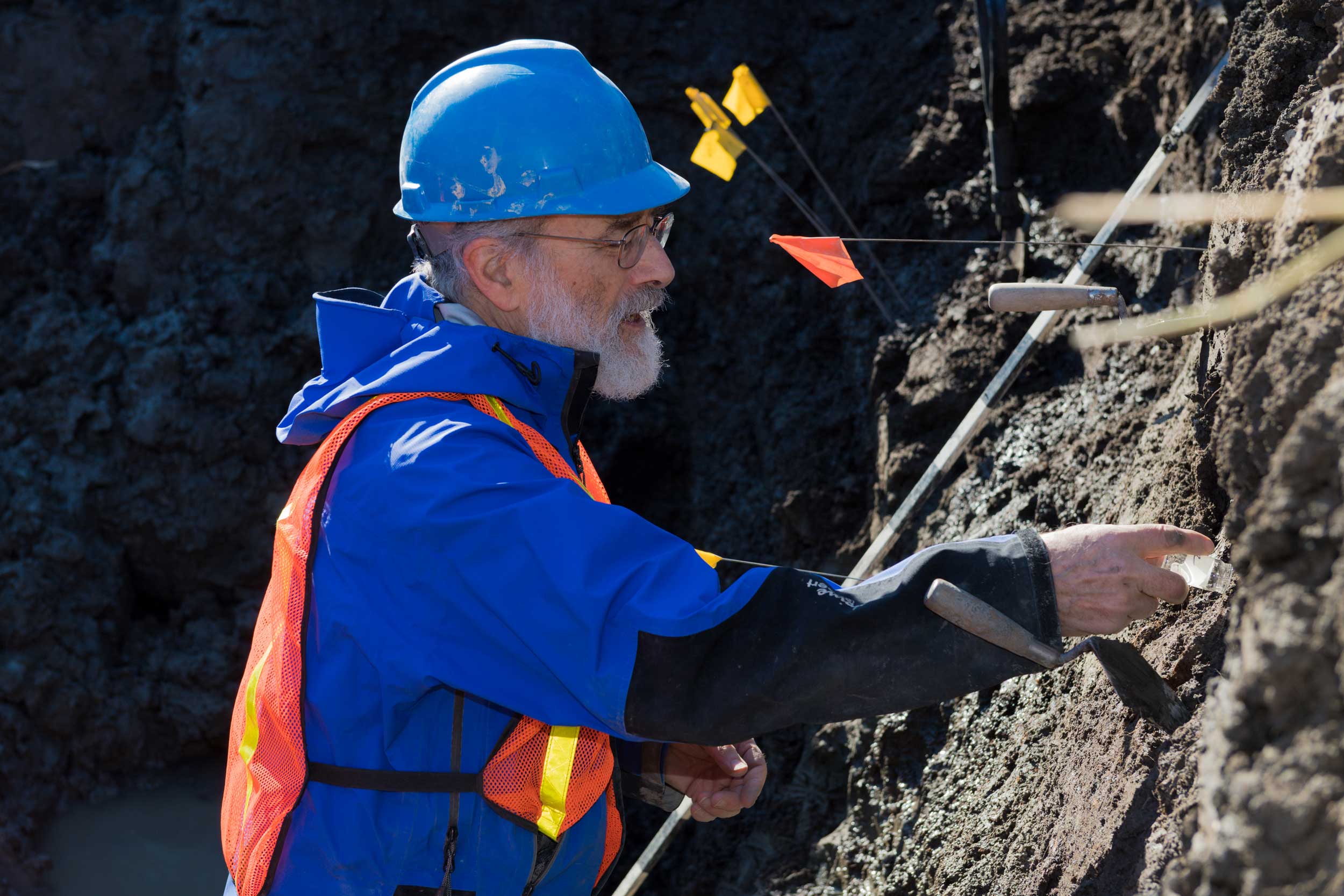 Fisher collects a sediment sample by pressing a glass vial into the wall of the pit, then extracting the filled vial. About 150 samples were collected in this manner on the first day of the dig.

Organic material from some of the samples will be radiocarbon-dated. If the dates grow steadily older with increasing depth, as expected, the researchers can have increased confidence in the dates of the Bristle Mammoth bones.

Pollen grains and fungal spores will be extracted from the sediments and analyzed to help reconstruct ancient environments and to provide proper context for the mammoth find.

Spores from the Sporormiella fungus are found today in the dung of domestic livestock animals as well as wild herbivores. The spores are preserved in recognizable form for thousands of years and are used in paleoecological studies as a proxy for the abundance of ancient grazing mammals such as mammoths.

If the fungal spores are found in the various ancient sediment layers at the Bristle site, their distribution could reveal when grazing mammals were present at the site as well as the timing of their local extinction.

Pollen grains would show what types of plants were growing at the time of the Bristle Mammoth and how the vegetation mix changed over time as the climate shifted. 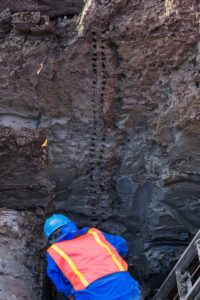 On the first day of the latest dig, researchers took sediment samples at 2-inch intervals from a wall of the excavation pit.

The oldest well-documented, published evidence for humans in Michigan is about 13,000 years ago, the age of the spear-wielding Clovis hunters. But several lines of evidence from the Bristle Mammoth, including the single radiocarbon date, imply that humans processed the carcass more than 2,000 years before the Clovis hunters arrived.

The Bristle Mammoth remains were found in pond sediments. Fisher suspects early humans butchered the carcass and placed selected portions at the bottom of the pond for storage, using boulders to anchor their meat stash.

The weather was ideal for this week’s two-day dig, with sunny skies and unseasonably warm temperatures both days. Excavation costs of the second dig are being covered by Friends of the University of Michigan Museum of Paleontology, a group of avocational paleontologists associated with the university.