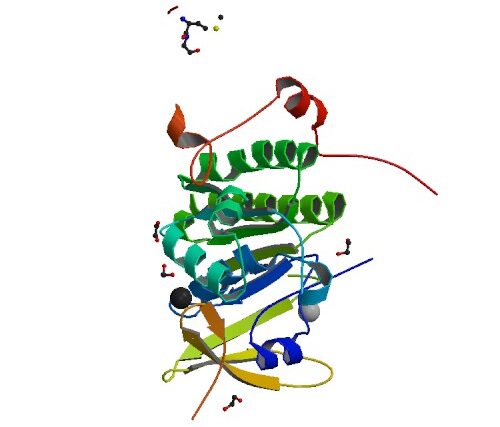 The initials BRCA2 may be best known for a gene associated with many cases of breast cancer, and the protein encoded by the BRCA2 gene is critical to repairing breaks in DNA.

The breakdown of this interaction is a hallmark of many cancers. Now, U-M scientists have determined the structure of a complex of two proteins—BRCA2 together with MEILB2—that allows repairs to happen efficiently in cells undergoing cell-splitting, called meiosis. Their results, reported in Nature Structural and Molecular Biology, have major implications for cancer and infertility.

“We know how the literature is rich with examples of BRCA2 mutations in cancer, but our findings now suggest that the MEILB2-binding region of BRCA2 might be a hotspot for discovering mutations related to infertility,” said study author and U-M structural biologist Jayakrishnan Nandakumar, associate professor of molecular, cellular, and developmental biology.

In germ cells—the cells that give rise to sperm or eggs—DNA breaks occur in every chromosome before the cells undergo meiosis. The breaks ensure mixing of genes to create genetic diversity rather than exact copies of the parents. In meiosis, each germ cell splits twice so that each egg or sperm ends up with only one copy of each chromosome. Then when egg meets sperm, the embryo has the right number of chromosome pairs.

Before the first split occurs, the chromosomes in the germ cell pair up tightly and then each chromosome within a pair breaks and rejoins with pieces from its partner to exchange genes in a process called crossover. Then all these DNA breaks need to be rejoined quickly.

Think of a sandwich, Nandakumar explains. The “bun” is composed of four identical copies of a protein called MEILB2 on the top and bottom, with the two BRCA2 proteins between. The MEILB2 protein sandwich carries the BRCA2 protein precisely to the DNA break points.

To determine the structure of this BRCA2 complex, the researchers used X-ray crystallography. In this process, the protein crystal is bombarded with X-rays and the patterns that are generated when the X-rays deflect off the atoms in the crystal allow the researchers to figure out where each atom is located in the 3D structure of the molecule. That would help them figure out how the BRCA2 protein is connected to the MEILB2 protein.

The first step was to grow crystals of the BRCA2 complex. After much trial and error, Devon Pendlebury, a chemical biology graduate student in the Nandakumar lab, successfully crystallized the human form of the BRCA2 complex. In a bit of good fortune, the U-M researchers were able to collect data at the Argonne National Laboratory days before all research was shut down in March 2020.

From the X-ray crystallography data and additional experiments by MCDB graduate student Ritvija Agrawal, the team determined the structure of the protein complex and how the two proteins worked together. It was a somewhat unusual protein-interaction, they report.

To validate their findings, they created mutant versions of BRCA2 and MEILB2 based on their structure and showed how these mutants failed to form this complex with each other.

In further validation of the MEILB2-BRCA2 complex structure, collaborators at the University of Gothenburg in Sweden introduced equivalent mutant versions in mouse cells undergoing meiosis. Mutant BRCA2 or MEILB2 failed to get to the DNA breaks that needed to be rejoined.

“While we have known BRCA2 was necessary for DNA recombination in meiosis, we didn’t know how it was able to do this critical job efficiently,” Nandakumar said. “The MEILB2 that is part of this repair complex is only supposed to be present in cells that undergo meiosis but MEILB2 has also been found in several cancers. It may be that MEILB2 is very efficiently ‘hijacking’ the BRCA2 in cancer cells, preventing proper repair of the DNA.”

Co-authors include Hiroki Shibuya, an assistant professor in the Department of Chemistry and Molecular Biology at the University of Gothenburg.