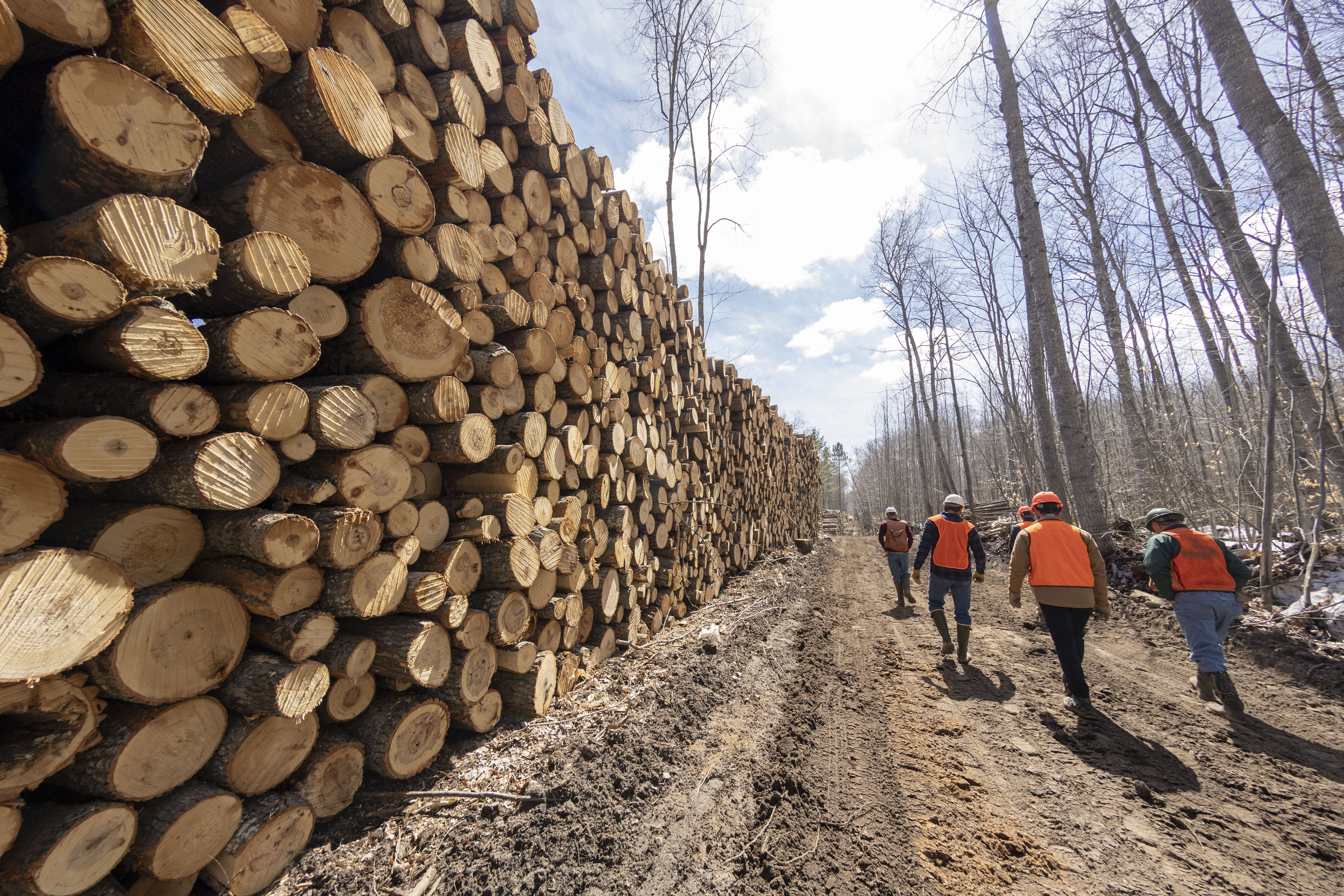 U-M researchers and their colleagues walk past a stack of bigtooth aspen logs cut as part of the UMBS Adaptive Aspen Management Experiment at the U-M Biological Station, near the northern tip of Michigan’s Lower Peninsula. Image credit: Roger Hart, University of Michigan Photography

PELLSTON—In an aspen-dominated hardwood forest at the northern tip of the state’s Lower Peninsula, University of Michigan scientists are testing ways to make the region’s forests more resilient to climate change.

About 12,000 mature trees—mostly aspen—are being cut on 77 acres at the U-M Biological Station, a 10,000-acre research and teaching facility just south of the Mackinac Bridge, near the town of Pellston.

The idea of the UMBS Adaptive Aspen Management Experiment is to replace some of the century-old aspen with a mix of tree species and age groups that may be better equipped to handle a warming climate, extreme weather events, and stresses such as insect pests.

The harvesting started in March, paused in May for bird-nesting season and student summer research, and will be completed in September. By the time it’s done, about 200 truckloads of logs will have been hauled to a nearby mill for processing into wood siding and trim for homes.

Cutting some of the mature aspen, which are nearing the end of their lifetime, will stimulate the regrowth of new aspen trees and should boost understory species, as well, said U-M ecologist and biogeochemist Luke Nave, who leads the project.

“We’re reaching a point with our climate where we can’t pretend that it’s not changing. To sit by and do nothing, when we have a forest that is vulnerable to climate change, would be irresponsible,” he said. 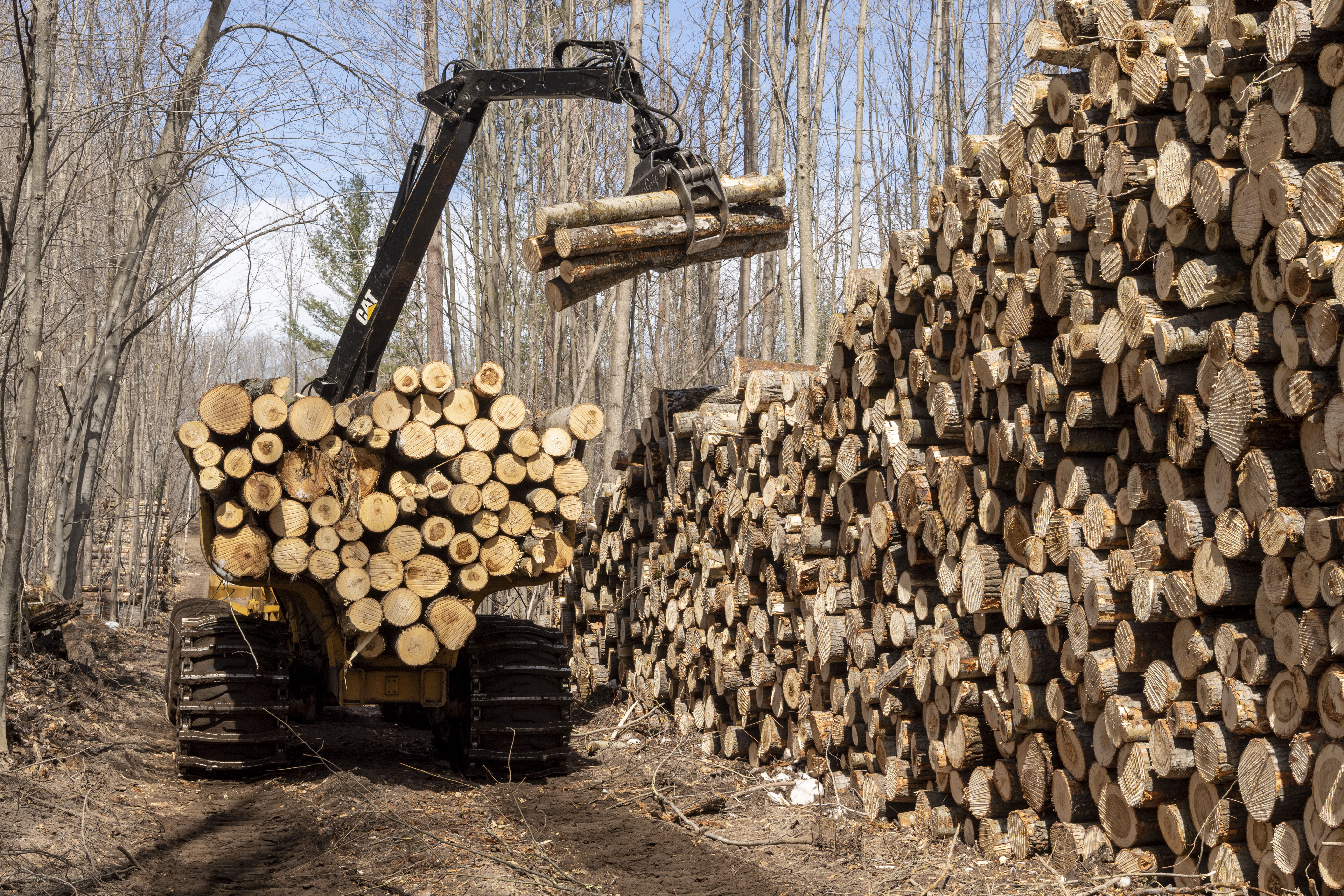 Nave is standing in front of a tall stack of bigtooth aspen logs ready for transport to the Upper Peninsula mill. Nearby, two large, noisy machines move methodically through the forest, cutting aspen trees into 8-foot, 4-inch logs, then stacking them. Some of the trees are 100 feet tall, with trunks nearly 2 feet in diameter.

Aspen in the Great Lakes region are considered “climate change losers,” according to Nave, and are not expected to fare well as the region’s climate continues to warm in the coming decades. Stands dominated by a single species and containing trees of a uniform age and canopy height may be especially vulnerable.

“I’m not a finance guy, but you can think of forest management in terms of investment strategies. You don’t put all your investments in one place. You try to diversify, because it protects you against risk,” said Nave, an associate research scientist at the Biological Station and in the U-M Department of Ecology and Evolutionary Biology.

“So, if you have different tree species arrayed in different age classes across the forest, that’s a diversified investment strategy that increases your capacity to respond to climate warming, drought and severe weather events.”

A 2014 forest vulnerability assessment by the Framework concluded that suitable habitat for aspen in northern Michigan will sharply decline by the end of this century if little is done to rein in global emissions of heat-trapping greenhouse gases.

The U-M aspen management project involves a $178,000 timber sale to Louisiana-Pacific Corporation, which operates a mill in the eastern Upper Peninsula town of Newberry that employs 127 people. The mill makes LP® SmartSide® siding and trim, one of Louisiana-Pacific’s best-selling products.

The timber sale is expected to yield 8,600 tons of wood—7,700 tons of aspen plus other hardwoods and some pine, according to Travis Kangas, a Louisiana-Pacific resource manager.

The cutting is being done at a Biological Station site known locally as the Pellston Hill. Three aspen management strategies—resistance, resilience and transition—are being tested by harvesting trees on four units totaling 77 acres:

The 77-acre harvesting zone is within a 452-acre management area that includes untreated reference areas and several young stands that regenerated after being clear-cut in the early 1970s or early 1980s.

“The forestry community is still very early in the process of learning what it means to adapt to climate change. So, demonstration projects like this will provide really useful information that will help the whole community learn about climate adaptation,” said Stephen Handler, a climate change specialist with the U.S. Forest Service in Houghton, Michigan, and who also works for the Northern Institute of Applied Climate Science.

Revenues from the Biological Station timber sale will fund a study of tree-harvesting impacts on groundwater and soil carbon throughout the 452-acre management area. Proceeds from the sale will pay for the installation of dozens of groundwater monitoring wells, as well as analysis of thousands of soil and groundwater samples collected from the wells, Nave said.

The aspen management experiment will also create future research opportunities for students and faculty researchers who spend time at the U-M Biological Station each summer.

Louisiana-Pacific’s Kangas said he inspected the Biological Station’s timber-sale site last year to estimate the amount of usable timber and its market value, a process called cruising. He said he was impressed by the size and health of the aspen trees—mostly bigtooth aspen with some trembling (also known as quaking) aspen.

“This is a high-quality site for aspen,” Kangas said. “I couldn’t believe the size and volume of the trees when I first cruised it. You see aspen like this in Canada, but you just don’t see it in Michigan.”

A few hundred yards away, down a muddy dirt road, a two-man crew—one operating a machine called a processor (also known as a harvester) and the other at the controls of a forwarder—cuts the trees and stacks the logs.

The jaws at the end of the processor’s long arm grasp the base of each tree, cut it, then flip the tree onto the ground horizontally. Limbs are sheared away as the processor pulls the tree trunk past a large chainsaw blade that quickly slices it into logs. Then the forwarder, with giant claws like some oversized arcade game, scoops logs from the ground, stacks them neatly into its bed, and transports the load to the roadside pile where a logging truck will take them to the mill.

Aspen exploit disturbances like this to regenerate a new generation of trees. Where these mature aspen trees are cut, the roots will send up countless new “suckers” to replace them, said Dean Reid, a consulting forester who set up the timber sale for the university and who acted as the liaison with Louisiana-Pacific.

“You can get 15,000 to 20,000 aspen stems of regeneration per acre,” Reid said. “But aspen need direct sunlight, so most of those stems will die if shaded, and the others will compete and crowd each other out.”

The aspen now nearing the end of their lifetime at the Biological Station were established following the epic logging and wildfire disturbances that transformed the forests of the Upper Great Lakes region more than a century ago.

After northern Michigan’s forests were cleared in the late 1800s, a series of wildfires swept through the region and devoured the slash, the woody debris left behind after logging. Most of the Biological Station’s mature aspen date to the period between 1908 and 1919, which is the last time the property was severely burned by post-logging wildfires, Nave said. The U-M Biological Station was established in 1909.

A big part of the research mission for generations of Biological Station researchers and students was to document the forest’s recovery from that cataclysm. Today, through projects like the Adaptive Aspen Management Experiment, researchers there are studying how the forest will cope with a different threat, one whose effects are already being felt: climate change.

The aspen management strategies being tested at the U-M Biological Station were developed through the Northwoods Climate Change Response Framework, a project of the Northern Institute of Applied Climate Science.

In 2014, the Framework issued a report, which was published by the U.S. Forest Service, titled “Michigan forest ecosystem vulnerability assessment and synthesis.” The report examined the climate-change vulnerability of forests in Michigan’s northern Lower Peninsula and eastern Upper Peninsula over the next century.

The study’s authors, which included U-M ecologists Inés Ibáñez and Knute Nadelhoffer, focused on two plausible climate scenarios tied to global emissions of heat-trapping greenhouse gases. They examined a high-emissions scenario—which the authors said “may be more realistic based on our current global greenhouse gas emissions trajectory”—and a lower-emissions scenario.

The high-emissions scenario projects an 11.2-degree Fahrenheit summer temperature increase in the assessment area by the end of the 21st century. At the same time, summer precipitation is projected to decline by 3.8 inches under that scenario. 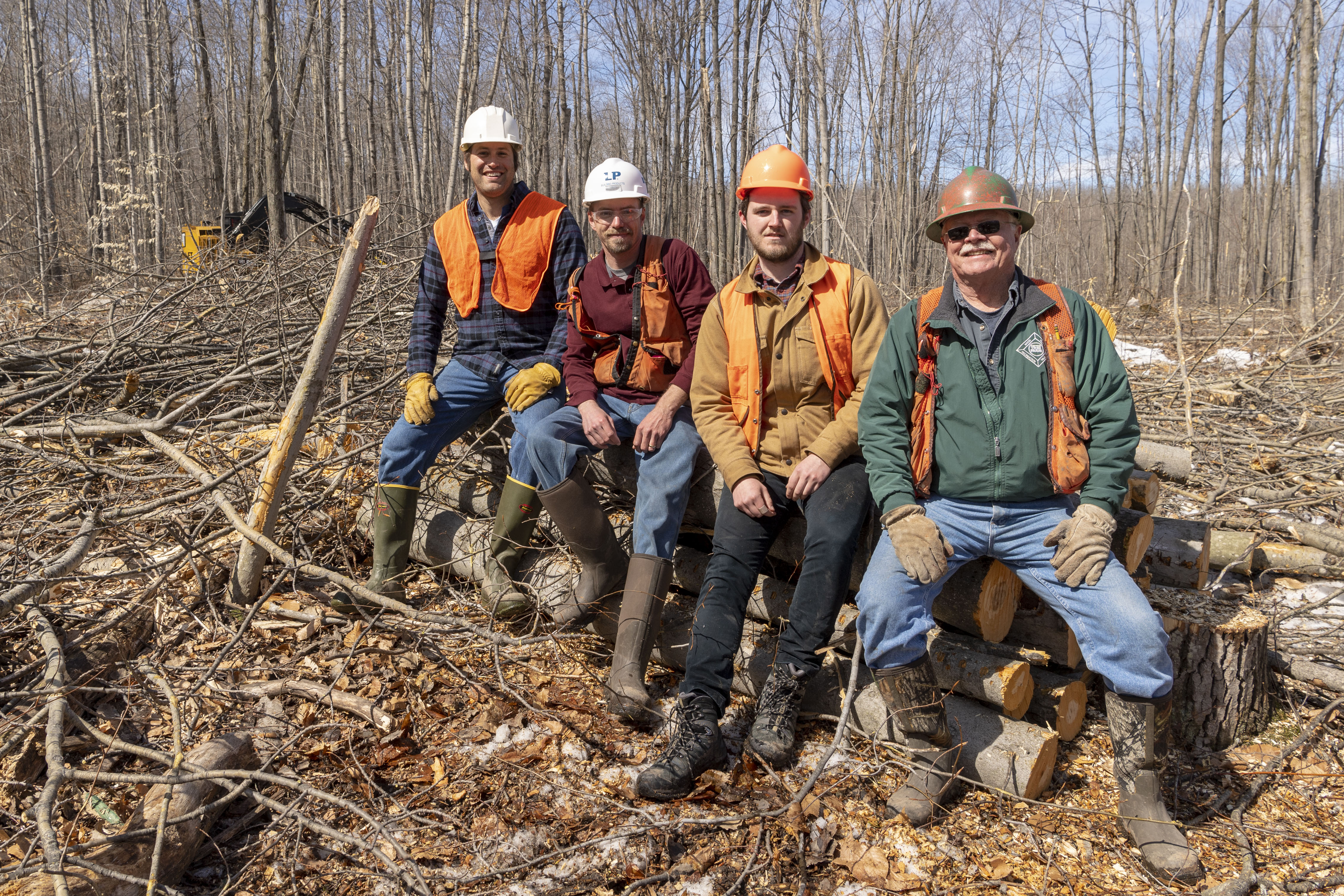 This potential double whammy may result in “a much higher degree of summertime moisture stress” in the forests than indicated by precipitation values alone, according to the report.

Under both the high- and low-emissions scenarios, winters are expected to continue warming faster than other seasons and snowfall totals are projected to decline, with more winter precipitation falling as rain. Intense precipitation events may continue to become more frequent than in the past, according to the report.

“Two of the principal climate vulnerabilities that we’re looking at here at the Biostation are water stress during the summer growing season and the possibility of increased windthrow—entire trees being blown over, roots and all—from ice storms and other intense precipitation events,” Nave said.

“I can tell you anecdotally—from a dozen years of living and working at the Biostation—that there’s been more rain and freezing rain in the winter. And these very tall, mature aspen, which grow to a uniform height and are unable to root deep because of a dense subsoil, are prone to being blown over in strong winds and during ice storms.”

Additional aspen cutting in the 452-acre management area could be considered in the future, pending the results of the current study, Nave said. Future work could also include the planting of seedlings from tree species already present at the Biological Station (red oak, white pine, bigtooth aspen, sugar maple), as well as the introduction of tree species that currently reach their range limits nearby to the south (white oak, northern pin oak, shagbark hickory).

It will take a decade or more to know which of the aspen-management treatments was most effective, Nave said. It is expected that future generations of Biological Station researchers and students will carry on with the work, he said.