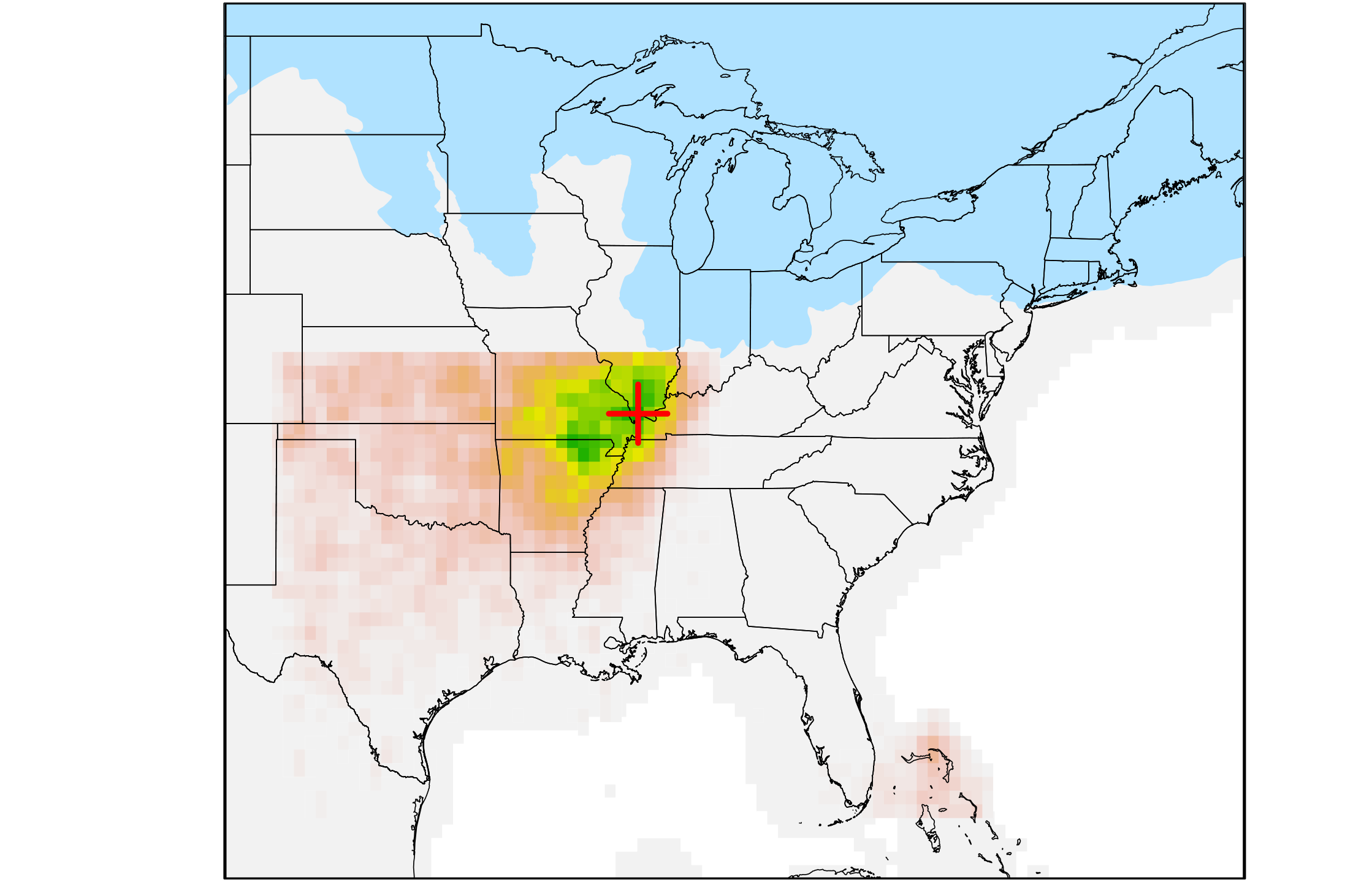 The green area on the map shows the inferred location of a “northern microrefugium” where bitternut hickory trees survived the last ice age. Results from a University of Michigan genomic study support the controversial idea that some trees likely survived much farther north and closer to the ice sheet than is generally believed. The red cross marks the spot with the highest likelihood of being the microrefugium. Image credit: Bemmels et al in PNAS.

ANN ARBOR—During the last ice age, which peaked around 21,500 years ago, glaciers covered large portions of North America, including the entire Great Lakes region. Once the ice retreated, the land was gradually repopulated by trees that eventually formed dense forests.

But what was the source of the trees that carried out this vast postglacial recolonization? Identifying the exact location of these so-called glacial refugia—the places where ancestors of today’s forest species survived the last ice age—has proved difficult and is the topic of an ongoing debate among biologists.

Now, University of Michigan researchers report using a recently developed genetic technique to estimate the precise longitude and latitude of ice-age refugia for two broadly distributed hickory species, the bitternut and the shagbark.

Their results support the controversial idea that some trees likely survived much farther north and closer to the ice sheet than is generally believed. The study was published online April 8 in Proceedings of the National Academy of Sciences.

The researchers looked for the signatures of past geographic migrations in the trees’ DNA. Their results for the bitternut hickory support the idea of northern microrefugia, places where local climatic conditions may have allowed the persistence of isolated tree populations within a region of generally inhospitable climate.

“The traditional view is that these tree species only survived in larger refugia located farther south, where regional climate was much warmer,” said Jordan Bemmels, first author of the PNAS paper.

“Our results for bitternut hickory provide some of the strongest evidence to date that northern microrefugia existed and were important for survival of some temperate tree species throughout the ice age,” said Bemmels, who conducted the study for his doctoral dissertation in the U-M Department of Ecology and Evolutionary Biology.

The inferred location of the northern microrefugium is near the confluence of the Mississippi and Ohio rivers, in a region that today includes southernmost Illinois, southeastern Missouri, northeastern Arkansas and westernmost Kentucky.

As it happens, that location is only 160 miles from a site in southwestern Tennessee, near Memphis, where rare preserved remains of ice-age hickories were found decades ago.

Bemmels is now a postdoctoral research associate at the University of Georgia. His co-authors on the PNAS paper are Christopher Dick and Lacey Knowles of the U-M Department of Ecology and Evolutionary Biology.

Identifying the locations of glacial refugia is important to biologists for several reasons. In addition to helping them understand basic forest history, the information allows them to establish a baseline that shows how fast and how far tree species are able to migrate in response to climate change.

But Bemmels and his colleagues conclude that “increasing evidence of expansion out of northern microrefugia suggests that conventional wisdom about management of genetic diversity may need to be revised.”

Numerous refugial regions have been proposed in eastern North America, including the Gulf Coast, the Atlantic Coastal Plains, the Lower Mississippi River Valley, the Southern Appalachians, the Florida peninsula and central Texas.

Various research tools have been applied to the problem over the years, but all of them have limitations. Climate-based models identify only broad areas of potential habitat, and traditional studies of the geographic distribution of genealogical lineages provide poor spatial resolution. Fossil pollen records provide some clues on refugia locations, but those records are incomplete for most of eastern North America at the time of the last ice age and have been difficult to interpret.

In the current study, Bemmels and his colleagues harnessed signals of range expansion from large genomic datasets, using a simulation-based framework to infer the precise latitude and longitude of North American glacial refugia for two hickory species.

The technique they applied, a data-analysis pipeline called X-Origin, was developed in the laboratory of co-author Lacey Knowles at the University of Michigan. It was originally used to study expansion of pika populations in Alaska but has broad applications for understanding the geography of range expansion in terrestrial species.

The researchers examined more than 1,000 genetic markers spread across the genomes of bitternut and shagbark hickories, from datasets Bemmels generated for another section of his doctoral dissertation. The genetic material was collected from about 150 individuals in each species, across the full range of both species.

The direction and distance the trees migrated from their initial source population left behind distinctive patterns within their DNA—footprints that could be traced back to the geographic source.

The researchers used a computer simulation technique to model range expansion from different refugia and to produce expectations for the genetic patterns that would likely arise from these different “expansion origins.”

Then they compared the simulated genetic patterns to the real genetic patterns extracted from hickory tree DNA to identify the most likely scenarios. By repeating the process millions of times, they were able to statistically estimate the latitude and longitude where the ancestors of modern populations survived the last ice age—something that not been done before for temperate trees.

The inferred location of the glacial refugium for the other study species, shagbark hickory, is in the eastern Gulf Coastal Plain and includes most of Alabama, Mississippi and southeastern Louisiana. That location corresponds to more traditional proposals of a southern refuge.

“The ability to extract details from population genomic data about where species took refuge when changing climate conditions drove shifts in their distribution means the researcher’s toolbox now has a powerful way to identify the geographical coordinates of such refugia in any species,” Knowles said.

Co-author Dick added: “Although the inferred northern refuge in the Mississippi Valley was generally harsh and inhospitable during the glacial period, there were probably milder conditions near glacial meltwater lakes—known as microclimates—in which some temperate tree species could persist.” U-M’s Dick is also a research associate at the Smithsonian Tropical Research Institute.

The PNAS paper is titled “Genomic evidence of survival near ice sheet margins for some, but not all, North American trees.” Support for the research was provided by the National Science Foundation, the U-M Department of Ecology and Evolutionary Biology, and U-M’s Rackham Graduate School.