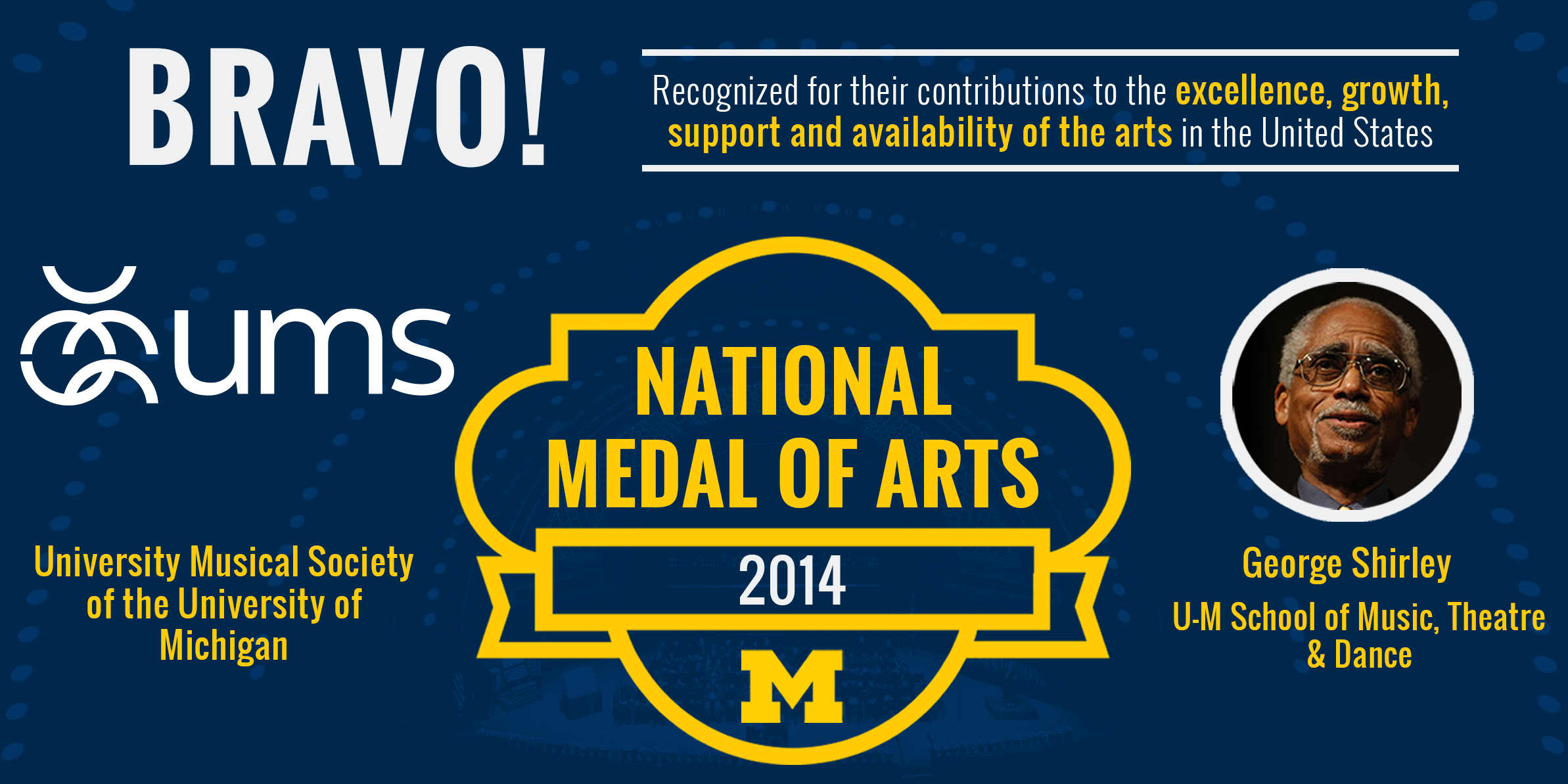 ANN ARBOR—The University Musical Society of the University of Michigan and George Shirley, emeritus professor at the School of Music, Theatre & Dance, will each receive a 2014 National Medal of Arts, the White House has announced.

Both are among 11 recipients of the nation’s highest public artistic honor, awarded annually by the president of the United States at the White House to those who have “demonstrated a lifetime of creative excellence,” according to the National Endowment for the Arts, which oversees the selection process.

“I applaud Professor Shirley and everyone at the UMS for achieving recognition at the highest level,” said U-M President Mark Schlissel. “The medals recognize the University of Michigan’s immense contributions to cultural appreciation, as well as our spectacular legacy in arts education and presentation. We take great pride in the arts and cultural opportunities we cultivate at the University.”

UMS, which will be the first university-related arts presenter to receive this high honor, is renowned for its 137-year long commitment to arts presentation, education and creation.

Since 1879, UMS has served regional audiences by bringing the world’s top dance, theater and musical performers to U-M’s campus and the Southeast Michigan region.

In addition to its recognition as one of the country’s leading arts presenters, UMS has received numerous awards for its commitment to arts education, offering more than 100 free educational activities each season to K-12 students, teachers, university students and the community. Through all of its programs, UMS seeks to “create a spark in people, young and old alike; to foster a greater awareness of diverse cultures and perspectives; and to generate an ongoing and lifelong passion for creativity and the performing arts.”

“We are simply ecstatic to be selected as a recipient of the National Medal of Arts,” said UMS President Kenneth Fischer. “For over a century, UMS has had an uncompromising commitment to presenting a diverse roster of legendary artists, to developing students at the University of Michigan and beyond, and to commissioning new work that we hope will influence arts enthusiasts for decades to come.”

Fischer will be in Washington, D.C., Sept. 10 to accept the award on behalf of UMS, where he will be joined by UMS Board Chair Stephen Forrest and UMS Programming Director Michael Kondziolka.

“Very few communities of our size can support the breadth and depth of performing arts experiences that happen here,” Fischer said. “It’s the ongoing support and partnership with University of Michigan faculty, staff and students, coupled with the extraordinarily talented and dedicated UMS staff and volunteers, that make it all possible. We are deeply honored to be sharing this distinction with George Shirley, who has graced us as both a performer and adviser since his first appearance with UMS in 1973.”

Shirley, whose career spans an impressive 56 years, is an award-winning operatic tenor and educator who is considered a trailblazer for diversity in the performing arts field. After graduating from Wayne State University in 1955, he was drafted into the Army, where he became the first African-American member of the U.S. Army Chorus.

At 27, Shirley was the first African-American tenor to perform a leading role at the Metropolitan Opera, where he sang for 11 seasons. Since then, he has sung more than 80 roles at the Royal Opera in London, Deutsche Oper in Berlin, Teatro Colón in Buenos Aires, Netherlands Opera in Amsterdam, Opéra de Monte-Carlo, New York City Opera and Scottish Opera, among others.

Shirley also has sung with many of the world’s great orchestras including the London, Detroit, Boston and Chicago symphonies; the New York Philharmonic; and the La Scala Orchestra. He has appeared at the Glyndebourne, Edinburgh, Spoleto, Santa Fe and Aspen summer festivals, and has recorded for RCA, Columbia, Decca, CRI, Angel, Vanguard and Philips Records. He also received a Grammy Award in 1968 for his role (Ferrando) in the prize-winning recording of Mozart’s “Così Fan Tutte.”

“I was stunned when informed by NEA Chairman Jane Chu that I had been selected to receive the National Medal of Arts Award,” Shirley said. “I had never seriously entertained the possibility of such official endorsement of my service to the arts by those tasked with making such decisions. I feel today as I felt some 54 years ago—dazed and incredulous—when I heard the chairman of the Metropolitan Opera Auditions announce that I had just won first prize plus a performance contract with that esteemed company.”

Known as much for his dedication to pedagogy as his vocal talent, Shirley was the first African-American hired to teach music in Detroit high schools. He also taught for six years at the University of Maryland before joining the SMTD faculty in 1987, where he was director of the Vocal Arts Division.

Shirley currently serves as the Joseph Edgar Maddy Distinguished University Emeritus Professor of Music and still maintains a studio at the school.

“The School of Music, Theatre & Dance is incredibly proud of this recognition of one of our most esteemed faculty members and our world-class presenting partner here at Michigan,” said SMTD Dean Aaron Dworkin. “This is truly a statement reflecting the depth and breadth of artistic excellence that is being developed, nurtured and showcased here in the heartland of America.”

Since the inception of the National Medal of Arts in 1984 under President Reagan, 302 individuals or organizations have been honored for their creativity, inspiration and hard work, including five with ties to U-M:

The awards will be presented by President Obama at a ceremony that will stream live via whitehouse.gov at 3 p.m. Sept. 10.