A University of Michigan scientist is one of 22 early-career researchers chosen to join the Pew Scholars Program in the Biomedical Sciences. 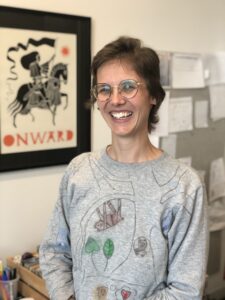 E. Josephine Clowney, an assistant professor in the Department of Molecular, Cellular, and Developmental Biology, will focus on unraveling how female and male brain development are programmed to allow sex-specific behaviors.

“We don’t have a global view of how the brain is set up: Do you start with everything, and then take pieces away, or do you start with only things common to two sexes, and add on things for males and add things for females?” Clowney said. “The hypothesis we’re trying to test is that brain masculinization results from dismantling female characteristics.”

Using the Pew funding, Clowney’s lab will be able to use cutting-edge technologies to study Fruitless. One such avenue includes new sequencing technologies that will allow them to look at individual cells versus groups of cells in order to suss out how specific neurons are working in the brain.

“Neurons are incredibly diverse within the brain, as well as between males and females,” Clowney said. “This kind of award allows us to think about these sex differences at a much bigger conceptual level and to take more risk in terms of technologies we can try out.”

The scientists will receive funding over the next four years as they investigate timely questions surrounding human health and disease.

“Pew has a history of supporting talented researchers who are committed to understanding intricate scientific processes,” said Susan Urahn, Pew’s president and CEO. “Our newest cohort of scholars is joining a large community of accomplished scientists who are dedicated to uncovering new solutions to significant biomedical challenges.”

The 2021 class of scholars—all of whom are early-career junior faculty—join more than 1,000 other scientists who have received awards from Pew since 1985. Current scholars have opportunities to meet annually, share ongoing research and exchange perspectives across the health sciences field.

The 2021 scholars were chosen from 198 applicants nominated by leading academic institutions and researchers across the United States. This year’s class includes scientists exploring the genetic evolution of cancer cells, how regulatory RNAs influence embryonic development, and how animals select specific types of foods for their nutritional needs.