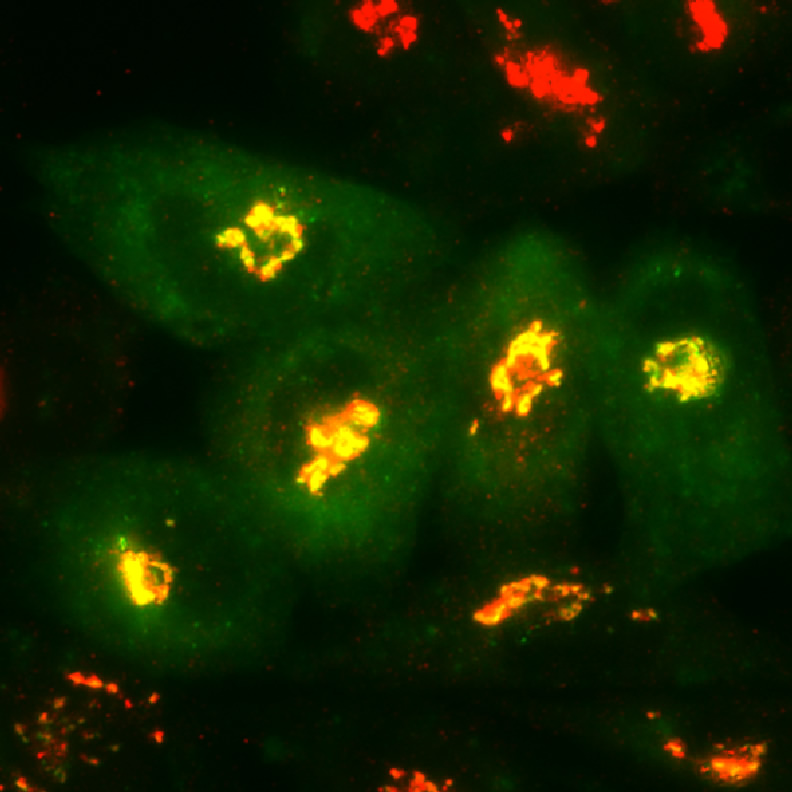 Microscopic images after the researchers restored the Golgi structure (red). Courtesy of principal investigator, Yanzhuang WangANN ARBOR—University of Michigan researchers have learned how to fix a cellular structure called the Golgi that mysteriously becomes fragmented in all Alzheimer’s patients and appears to be a major cause of the disease.

They say that understanding this mechanism helps decode amyloid plaque formation in the brains of Alzheimer’s patients—plaques that kills cells and contributes to memory loss and other Alzheimer’s symptoms.

The researchers discovered the molecular process behind Golgi fragmentation, and also developed two techniques to ‘rescue’ the Golgi structure.

“We plan to use this as a strategy to delay the disease development,” said Yanzhuang Wang, U-M associate professor of molecular, cellular and developmental biology. “We have a better understanding of why plaque forms fast in Alzheimer’s and found a way to slow down plaque formation.”

The paper appears in an upcoming edition of the Proceedings of the National Academy of Sciences. Gunjan Joshi, a research fellow in Wang’s lab, is the lead author.

Wang said scientists have long recognized that the Golgi becomes fragmented in the neurons of Alzheimer’s patients, but until now they didn’t know how or why this fragmentation occurred. 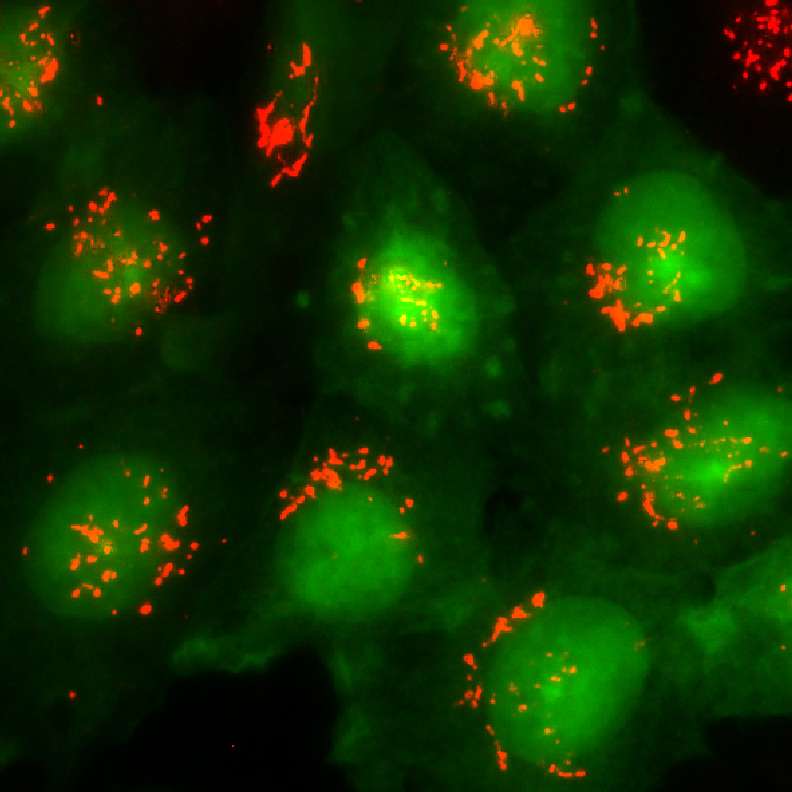 Microscope images of the Golgi structure (red) when fragmented under disease conditions.The Golgi structure has the important role of sending molecules to the right places in order to make functional cells, Wang said. The Golgi is analogous to a post office of the cell, and when the Golgi becomes fragmented, it’s like a post office gone haywire, sending packages to the wrong places or not sending them at all.

U-M researchers found that the accumulation of the Abeta peptide—the primary culprit in forming plaques that kill cells in Alzheimer’s brains—triggers Golgi fragmentation by activating an enzyme called cdk5 that modifies Golgi structural proteins such as GRASP65.

Wang and colleagues rescued the Golgi structure in two ways: they either inhibited cdk5 or expressed a mutant of GRASP65 that cannot be modified by cdk5. Both rescue measures decreased the harmful Abeta secretion by about 80 percent.

The next step is to see if Golgi fragmentation can be delayed or reversed in mice, Wang said. This involves a collaboration with the Michigan Alzheimer’s Disease Center at the U-M Health System, directed by Dr. Henry Paulson, professor of neurology, and Geoffrey Murphy, assistant professor of physiology and research professor at the U-M Molecular and Behavioral Neuroscience Institute.

The collaboration was made possible by MCubed, a two-year seed funding program to fuel interdisciplinary teams of U-M faculty to pursue research with major societal impact, as well as pilot funding from the Michigan Alzheimer’s Disease Center.