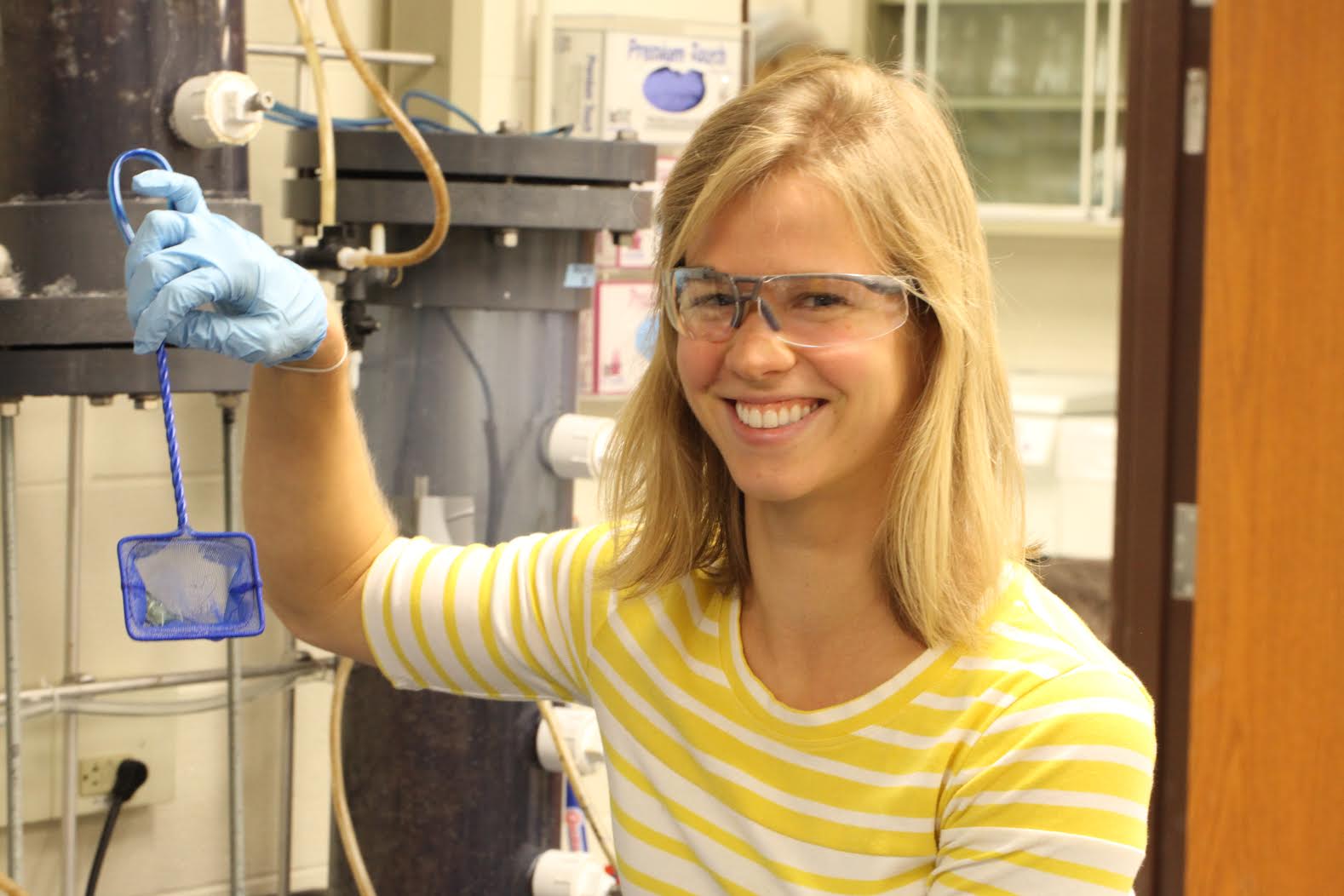 With seed funding from U-M’s Dow Distinguished Awards for Interdisciplinary Sustainability Program, Grobbel is using a vacant house in Detroit to cultivate approximately 400 shrimp from larvae, distribute the mature shrimp within the city, and demonstrate aquaculture as a viable way to address the scarcity of locally grown seafood, while simultaneously finding productive uses for vacant property in the city.

“Detroit has an estimated 79,000 vacant homes, many of which the city wants to demolish,” said Grobbel, who started working with shrimp in a research project with professor Lut Raskin of the Department of Civil and Environmental Engineering. “I started to question what a good alternative might be for some of the houses, and—given the lack of locally produced protein in the city—figured shrimp aquaculture was worth a try.”

University of Michigan graduate student Lizzie Grobbel in front of the vacant Detroit house where she is raising shrimp, which she hopes to sell to restaurants, markets and others. Image credit: Lisa PappasGrobbel initially wanted to pursue her project in an abandoned building but soon realized there were problems with legal access, safety and security. That’s when Darin McLeskey, a U-M alumnus who owns a house in the city, offered it to Grobbel for the duration of her experiment—at no cost. The price was right and its proximity to the Michigan Urban Farming Initiative was just too perfect and synchronistic to pass up. Co-founded by McLeskey, the initiative is a volunteer farm that grows produce on vacant lots and provides neighbors with fresh produce on a donation basis.

Using the Dow funding to purchase equipment and supplies, and with help from advisers Raskin and professor Jim Diana of the U-M School of Natural Resources and Environment, Grobbel assembled the necessary tank, feeding system and biofiltration system in the house’s basement, since shrimp prefer the dark. Lucky for her, most of the hardware had already been engineered and constructed for a former project in Raskin’s lab. 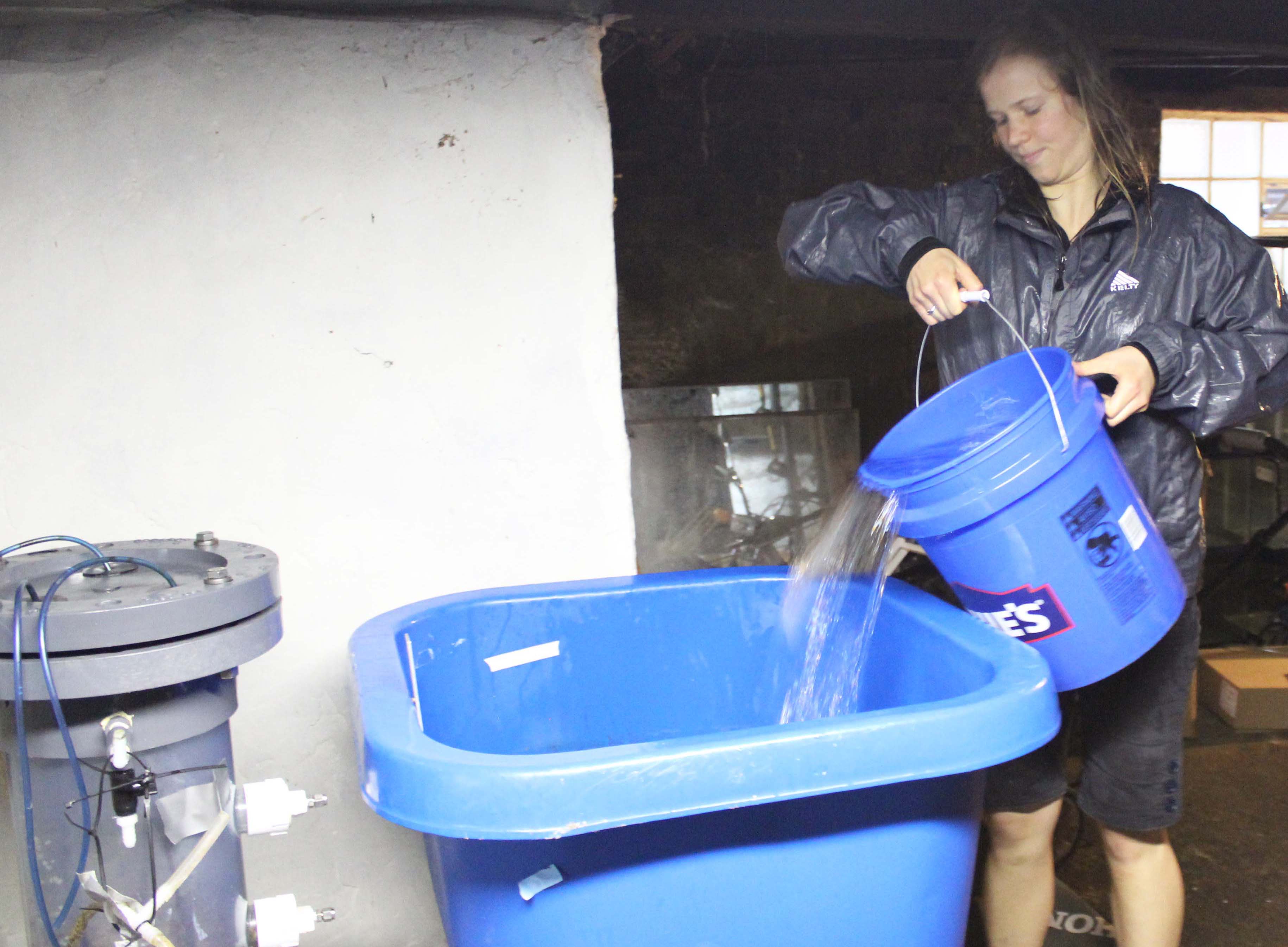 University of Michigan graduate student Lizzie Grobbel fills a large blue tank with water for raising shrimp at a vacant house in Detroit. Image credit: Lisa PappasThe setup includes a large plastic tank with salt water for her mail-order shrimp larvae. The tank is connected to cylindrical biofilters filled with crushed rock, on which bacteria grow and eat the shrimp’s waste. The cleaned water is then recirculated into the tank, eliminating any waste buildup. Once larvae acclimate to the setup, they are transferred to standard fish tanks that are connected to the same biofilters.

Shrimp are typically fed commercial shrimp feed. However, with hands-on support from U-M undergraduate biology student Daniel Bloch, Grobbel is testing the feasibility of using spent beer-brewing grains as a food source. She obtained spent grain from Wolverine State Brewing Co. in Ann Arbor and is test-feeding it to the shrimp.

The shrimp take three to four months to mature. Grobbel is investigating the legal process behind selling and distributing unprocessed, frozen shrimp in Michigan.

“As far as a market for the seafood, my number one priority is within the city limits,” Grobbel said. “I’ll be giving out samples of the first crop to interested parties and, for subsequent crops, I am looking into possibilities with the Eastern Market, nearby restaurants and other local entities. My goal is for the shrimp to be produced, distributed and consumed all in Detroit.”

While the idea of growing seafood in an urban setting may sound outlandish, the practice is gaining popularity.

For example, a nonprofit organization and multifaceted community redevelopment project in Detroit called Recovery Park is planning an aquaculture facility to grow fish such as tilapia, trout or sea bass in the city. Made possible with funding from the Fred A. and Barbara M. Erb Family Foundation, this ambitious effort aims to employ as many as 200 recovering substance abusers and reformed ex-felons.

“Recovery Park is a model for providing healthy food and breaking barriers to employment,” said Grobbel, who will complete a one-year analysis of Recovery Park as part of U-M’s Dow Sustainability Fellows Program.

According to the Michigan Aquaculture Association, Michigan is well positioned to expand aquaculture production because of its ample water supply and close proximity to major population centers.

Beyond her current endeavor, Grobbel has strong food roots in the Motor City. Her great-great-grandfather, Wilhelm Emil Grobbel, founded Grobbel Corned Beef in Detroit in the 1800s, and the family business is still going strong. She says it feels good to have family history in Detroit, and she’d be thrilled if her shrimp venture could somehow contribute to this legacy. 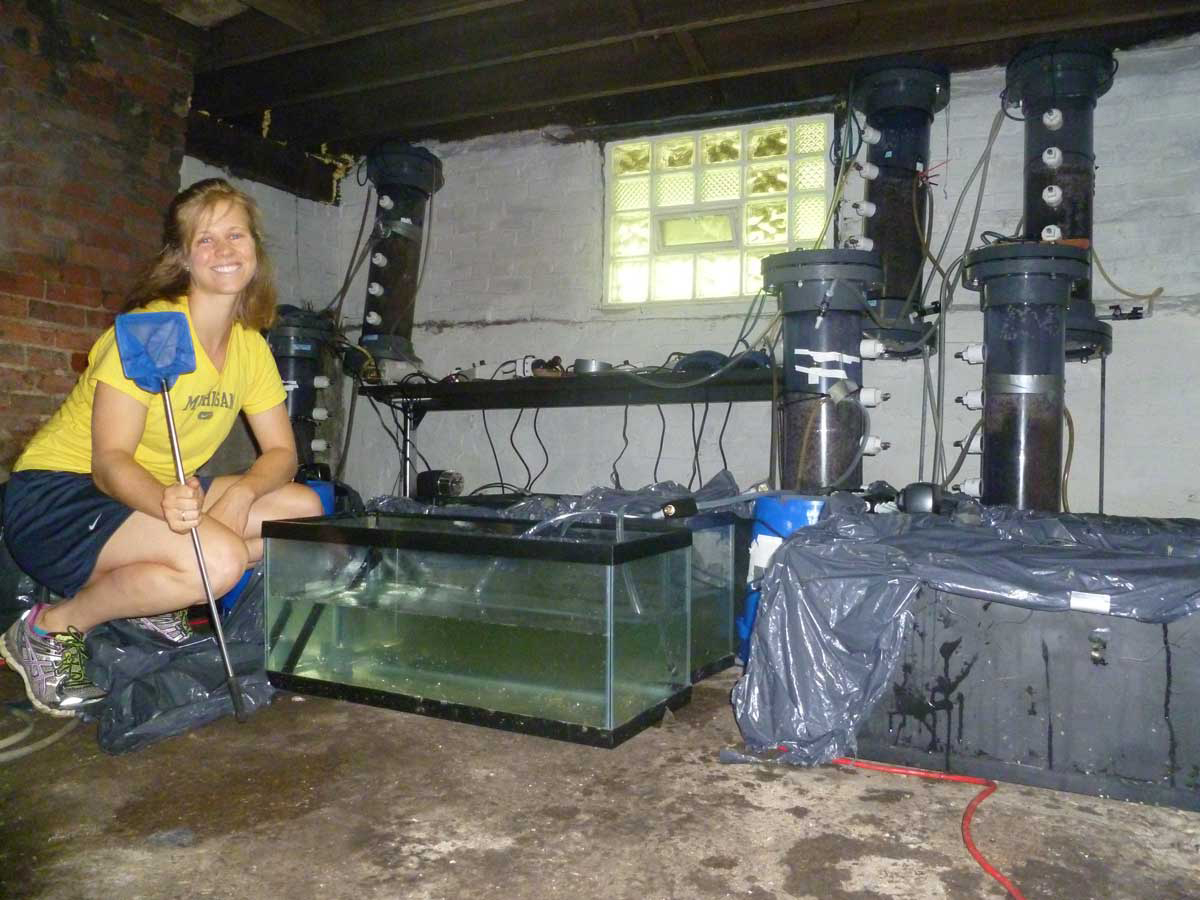 Lizzie Grobbel with the equipment used to grow shrimp in the basement of an unoccupied Detroit home. Image credit: Lizzie GrobbelHowever, she also realizes that any long-term contribution will have to develop in her absence. That’s because Grobbel is starting a full-time position next year as director of sustainability for Graham Partners, near Philadelphia. So, while she’s reluctant to leave behind what she started, Grobbel hopes the pilot project will be successful so that someone else will take the idea and run with it. If not, she’s okay with that, too.

“As much as I’d love to see the shrimp aquaculture venture continue, the outcome of the project really is a feasibility/case study of small-scale indoor urban aquaculture,” Grobbel said. “I want to show that you can produce seafood locally, with little overhead, and maybe even make some money in the process. I’m also hoping the results will be of interest to other Rust Belt cities experiencing vacancy and housing decline.”

Grobbel will complete a research report about the experimental results and community impact of her project in December. This report will be published online by U-M’s Graham Sustainability Institute, which administers the Dow Sustainability Fellows Program on behalf of the university. Grobbel also participated in the Graham Institute’s Sustainability Scholars Program while she was an undergraduate at the university.

“I am very grateful for the amazing sustainability-related opportunities I’ve had through the University of Michigan,” Grobbel said. “My most recent work really is kind of outside the box, but the Dow award competition was willing to support it and to realize its potential to impact the world and promote sustainable development.”