A University of Michigan student studying political science has been named a 2021 Rhodes Scholar, one of 32 Americans chosen to win scholarships to Oxford University. 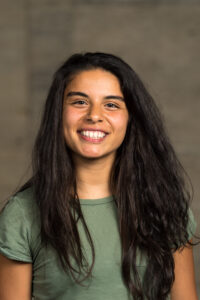 Amytess Girgis is the President of the Stamps Scholar Society.

Amytess Girgis of Grand Rapids, a senior in the College of Literature, Science, and the Arts, becomes the 29th U-M Rhodes Scholar since the awards were established in 1902. Due to the pandemic, the U.S. Rhodes Scholars for 2021 were elected virtually this year for the first time. Scholars were contacted over the weekend.

“It’s been a roller coaster of emotions: joy, shock, anxiety. But most prominent is the understanding of the implications of this honor—and reconciling with its colonial legacy,” Girgis said. “I’m still lost for words, and incredibly grateful for the opportunity.”

Her honors thesis focuses on mutual aid groups in Detroit during COVID-19. In addition to extensive experience in progressive political campaigns and union organizing, Girgis is president of the Michigan Stamps Scholars Society and one of the leaders of the One University campaign, which aims to increase funding and introduce policies of equitable long-term support for the University of Michigan’s Flint and Dearborn campuses.

Girgis, who is Iranian and Egyptian, plans a career “amplifying the experiences of the marginalized to rectify past harms.”

“Amytess’ political communications work focuses on listening to the stories of those who have been marginalized by our political and economic institutions and finding ways to tell their stories and amplify their voices,” said Henry Dyson, director of the U-M Office of National Scholarships and Fellowships. “She truly embodies the Rhodes criteria of ‘moral force of character and instincts to lead’ and willingness to ‘fight the world’s fight.'”

The Rhodes Scholarships are the oldest and most celebrated international fellowship awards in the world. Each year, 32 young students from the United States are selected as Rhodes Scholars through a decentralized process representing the 50 states, the District of Columbia and the U.S. territories.

This year, 22 of the students of color: 10 are Black, equal to the greatest number ever elected in one year in the U.S.; nine are first-generation Americans or immigrants; and one is a Dreamer with active DACA status. Seventeen of the winners are women, 14 are men and one is nonbinary.

Rhodes Scholarships provide all expenses for two or three years of study at the University of Oxford in England—ranked the No. 1 university in the world in some global rankings—and may allow funding in some instances for four years.

These students will commence their studies at Oxford in October 2021. They were selected from a pool of 953 applicants who had been nominated by their colleges and universities. They will now complete their applications to begin courses at Oxford next year, widely across the university’s academic disciplines.

“These young Americans will go to Oxford to study in fields broadly across the social, biological and physical sciences, the humanities and public policy,” said Elliot Gerson, American Secretary of the Rhodes Trust. “They are leaders already, and we are confident that their contributions to public welfare globally will expand exponentially over the course of their careers.”