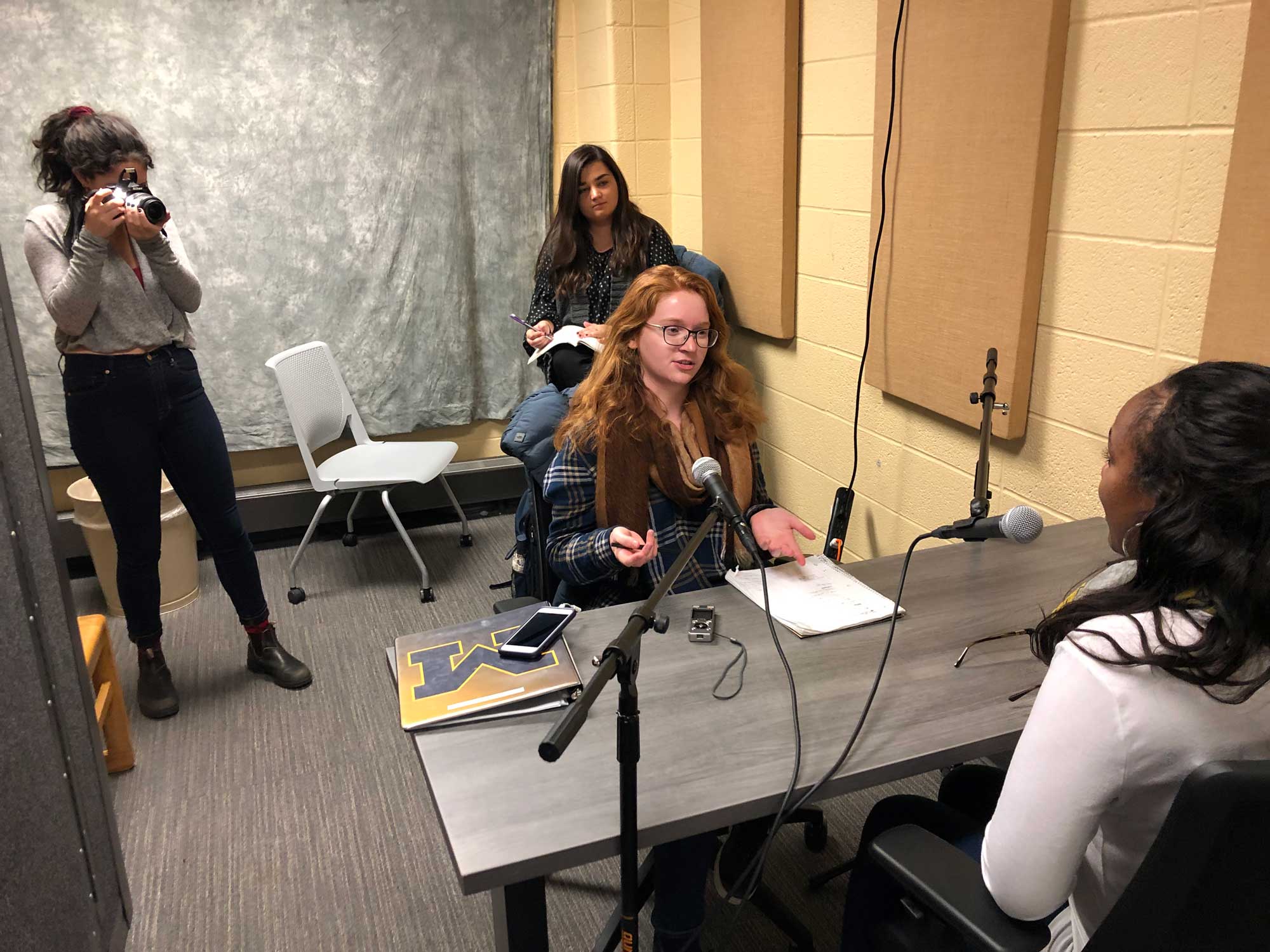 ANN ARBOR—Wearing a maize and blue scarf and with a wide and bright smile, Asia J. sits composed in front of a microphone at the Shapiro Design Lab. Across the table, with attentive eyes and headphones, is the host Hannah French, a student at the University of Michigan.

In the next hour or so, Asia J. will share stories of her nine years living behind prison bars, her fears, her moments of sorrow, and the joy from learning that she was coming home.

“I am willing to talk about anything if it is going to help someone,” she said. “I want to shed light in the darkness that is incarceration. I hope participating in the project gives me a voice to do that.”

A natural communicator, Asia J. is one of the characters in the new podcast “While We Were Away,” produced by a group of U-M students launched in early January. In the introductory segment, she defines herself as a poet, an activist, a writer and a hopeful romantic.

As soon as I set foot out of the prison, I felt like I was no longer wearing dirty glasses. Somebody had literally cleaned my glasses and I could see through all the darkness.

Vividly, she tells French how it felt to cross the gate of the Women’s Huron Valley Correctional Facility last October, after being locked up for almost a decade.

“As soon as I set foot out of the prison, I felt like I was no longer wearing dirty glasses,” Asia J. said. “Somebody had literally cleaned my glasses and I could see through all the darkness.”

Then she talks about her time inside and how the arts saved her while behind bars, and about hitting roadblocks and managing to overcome them after her release from prison.

The podcast’s first season will feature the stories of seven other prison community members, describing their experiences of coming home after long years in exile. Producers expect the narratives to serve as guidebooks for those seeking knowledge, peace, comfort and joy in life on the outside.

“Coming home is a complete physical, mental and spiritual metamorphosis. It is a complete change of life with distinct changes and challenges. My entire life changed when I went inside and when I came home,” said Mary Heinen, coordinator and former mentee of the Prison Creative Arts Project, a program at U-M’s Residential College that brings those impacted by the justice system and the U-M community into artistic collaboration for mutual learning and growth.

About 27 minutes long, each podcast episode will tell stories of a different participant and be a portrait of what life could look like on the outside. It will focus on the joys in spite of struggle, and will offer words of wisdom for the future by those who faced the same reality.

“There are not a lot of resources to prepare people when they come out,” said French, a senior studying anthropology and creative writing, with a minor in community action and social change. “I think stories are an incredible people-moving machine, and the switch from writing and reading stories to oral and audible ones has been a joy.”

It all started last spring with a group of students chatting in a local restaurant about their desire to work with and somehow help formerly incarcerated people. The idea was to find a way to contribute something relevant, meaningful and real, to provide information and resources to people who have been involved in the criminal justice system, but also to produce a show that would be entertaining, hopeful and light-hearted. 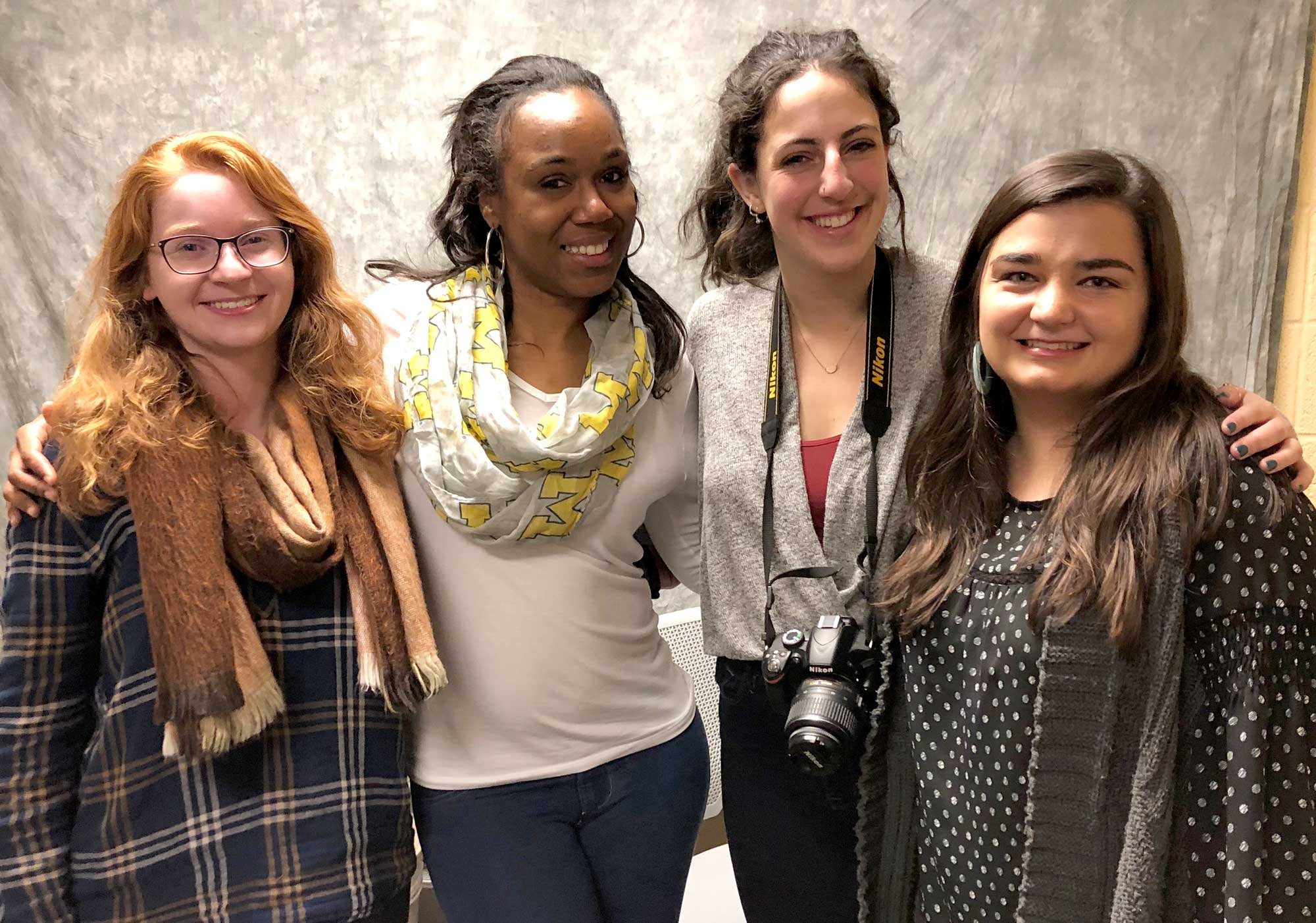 One of the students, Kathryn Condon, now a U-M alumna, was interested in combining her passion for the Prison Creative Arts Project with audio storytelling. She started this conversation, aiming to create a podcast that could statistically help change the recidivism rate.

“There is an incredibly high percentage of people in Michigan that return to prison, mainly because there are so little resources for folks when they get out,” she said.

Condon also knew that people in prisons entertain themselves and those around them via storytelling.

For Heinen, those regaining their freedom after prison are eyewitnesses to history and are primary sources.

“So much of what we have seen and lived is not written in books or recorded. It is first-hand knowledge,” she said. “And PCAP is instrumental in social justice in real time in the real world. It is a bridge we cross to freedom, often by the road we paint and speak into existence with words.”

“I hope the podcast humanizes a dehumanizing experience. I hope that people will listen and be moved to action,” she said. “It is difficult being a returning citizen and it is only due to my family and volunteers who were willing to invest in me that I am living and thriving.”