Citywide greenhouse gas emissions in Detroit, 2012, by ZIP code. Amounts are expressed in millions of metric tons of carbon dioxide equivalents. Image credit: U-M/SNRE Detroit GHG Inventory Project TeamANN ARBOR—Energy use in buildings accounts for nearly two-thirds of the greenhouse gas emissions generated in Detroit, while exhaust from cars, trucks and buses is responsible for about 30 percent of the total, according to a new citywide inventory compiled by University of Michigan student researchers.

About 41 percent of the emissions from stationary sources—which include residential and commercial buildings, industrial processes, solid waste incineration and wastewater treatment—are produced within four ZIP codes located in the city’s southwest, midtown and downtown areas.

Those are a few of the key findings from the city’s first comprehensive inventory of greenhouse gas emissions, prepared by students at U-M’s School of Natural Resources and Environment in collaboration with U-M’s Center for Sustainable Systems and the nonprofit group Detroiters Working for Environmental Justice. The Detroit Climate Action Collaborative, an initiative of DWEJ, is leading the development of a climate action plan for Detroit.

The U-M team’s final report has been shared with the Detroit mayor’s office and was publicly released today. It measures Detroit’s citywide emissions for calendar years 2011 and 2012, and accounts for human-caused emissions of heat-trapping carbon dioxide, methane and nitrous oxide gases inside city limits. The amounts are expressed in units called carbon dioxide equivalents. 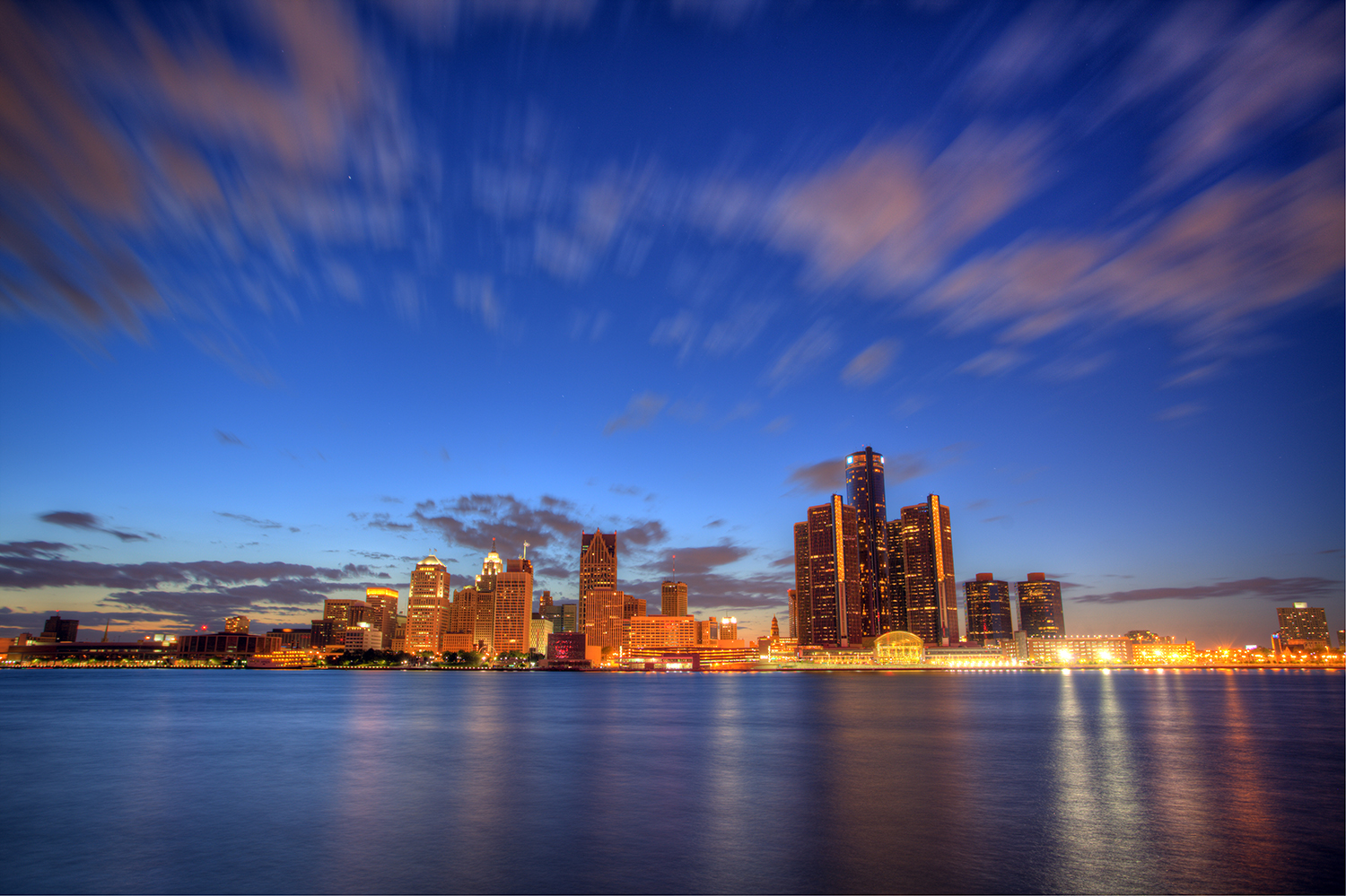 Detroit Skyline. Image credit: Andrew Langdal, Flickr“Reducing greenhouse gas emissions often goes hand in hand with energy-efficiency improvements that can cut costs,” said Robb De Kleine of the Center for Sustainable Systems, a project adviser. “But before you can identify reduction strategies and create detailed plans for the future, you have to know where you stand today. This greenhouse gas inventory is a critical first step in that process.”

The report, “City of Detroit Greenhouse Gas Inventory: An Analysis of Citywide and Municipal Emissions for 2011 and 2012,” was written by five SNRE students: Jill Carlson, Jenny Cooper, Marie Donahue, Max Neale and Anis Ragland. It was submitted in fulfillment of an SNRE master’s degree requirement.

The report took more than a year to complete and involved interactions with more than 50 organizations. Two other U-M faculty members, SNRE’s Rosina Bierbaum and Greg Keoleian, also advised the students.

“Throughout the project, I was incredibly impressed by all of the stakeholders we consulted across the city of Detroit and various sectors, whether for data, information or an additional perspective,” Donahue said. “There is a lot of optimism for using climate action planning and this inventory as tools to look forward and make a positive impact on Detroit’s future, which is really inspiring.”

The Detroit greenhouse gas inventory shows that 41 percent of emissions from stationary sources are produced in four Detroit ZIP codes: 48217 and 48209 (southwest), 48211 (midtown) and 48226 (downtown). 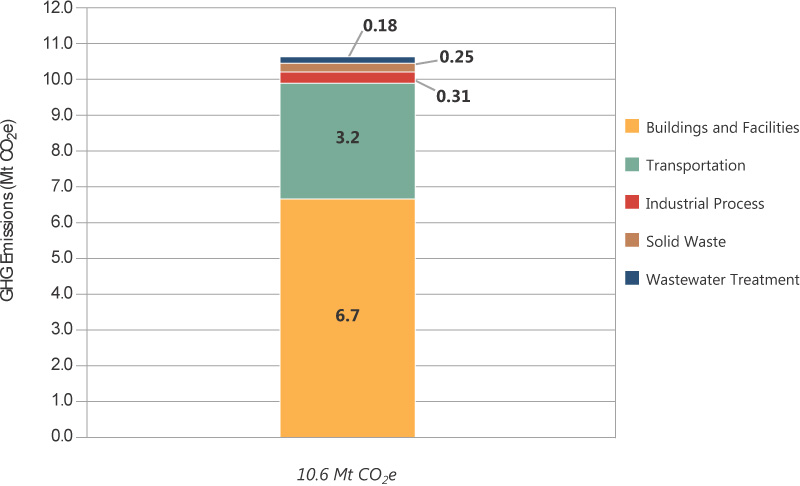 Citywide greenhouse gas emissions in Detroit, 2012, by activity. Amounts are expressed in millions of metric tons of carbon dioxide equivalents. Image credit: U-M/SNRE Detroit GHG Inventory Project The main sources of the emissions in those four ZIP codes fall into three categories: industrial, commercial and institutional. The large industrial sources are concentrated in ZIP code 48217 and include petroleum refining at the Marathon Petroleum Co. refinery and hydrogen production at a plant owned and operated by Air Products and Chemicals Inc.

Emissions from the three other top ZIP codes are primarily driven by what the report calls commercial and institutional activities. Those activities include wastewater treatment at the Detroit Water and Sewerage Department’s plant in ZIP code 48209, which is directly east of 48217 and fronts the Detroit River; solid waste incineration along with electricity and natural gas use from various municipal departments in ZIP code 48211, which is in midtown just south of Hamtramck; and electricity and natural gas use from nonprofits, academic institutions, health care facilities and commercial entities in downtown’s 48226 ZIP code.

Emissions in Detroit’s northwestern, western and northeastern ZIP codes are mainly driven by the electricity and natural gas used to heat, cool and power homes, according to the report.

Citywide, greenhouse gas emissions totaled 10.6 million metric tons of carbon dioxide equivalents in both 2011 and 2012. One metric ton equals 1,000 kilograms or about 2,205 pounds. If you drove from Detroit to Ann Arbor 60 times, your vehicle would emit roughly a metric ton of carbon dioxide, according to the report.

On a per capita basis, Detroit’s 2012 emissions are below average when compared to data previously collected from 13 other U.S. and Canadian cities. Detroit’s per capita emissions ranked ninth-lowest among that group—below Cleveland, Denver, Pittsburgh, Ann Arbor and Washington, D.C. Per capita emissions were lower in Baltimore, Boston, Minneapolis, Chicago, Philadelphia, Toronto, Seattle and New York City.

The report also shows that:

“The University of Michigan team worked closely with DTE and the city of Detroit to compile and analyze large and complex datasets, which made it possible to construct the first comprehensive inventory for the city. This was a productive partnership, which we expect to continue in the future,” said Greg Keoleian, an SNRE professor and director of the Center for Sustainable Systems.

“We are very excited about the release of this historic report and will use this inventory to develop the city of Detroit’s first climate action plan, which is in progress,” said Kimberly Knott Hill, project director for the Detroit Climate Action Collaborative. “This plan will identify actions that city officials, residents, businesses and institutions, and others can take to reduce greenhouse gas emissions, increase energy efficiency and ready Detroiters to cope with the impacts of climate change.”