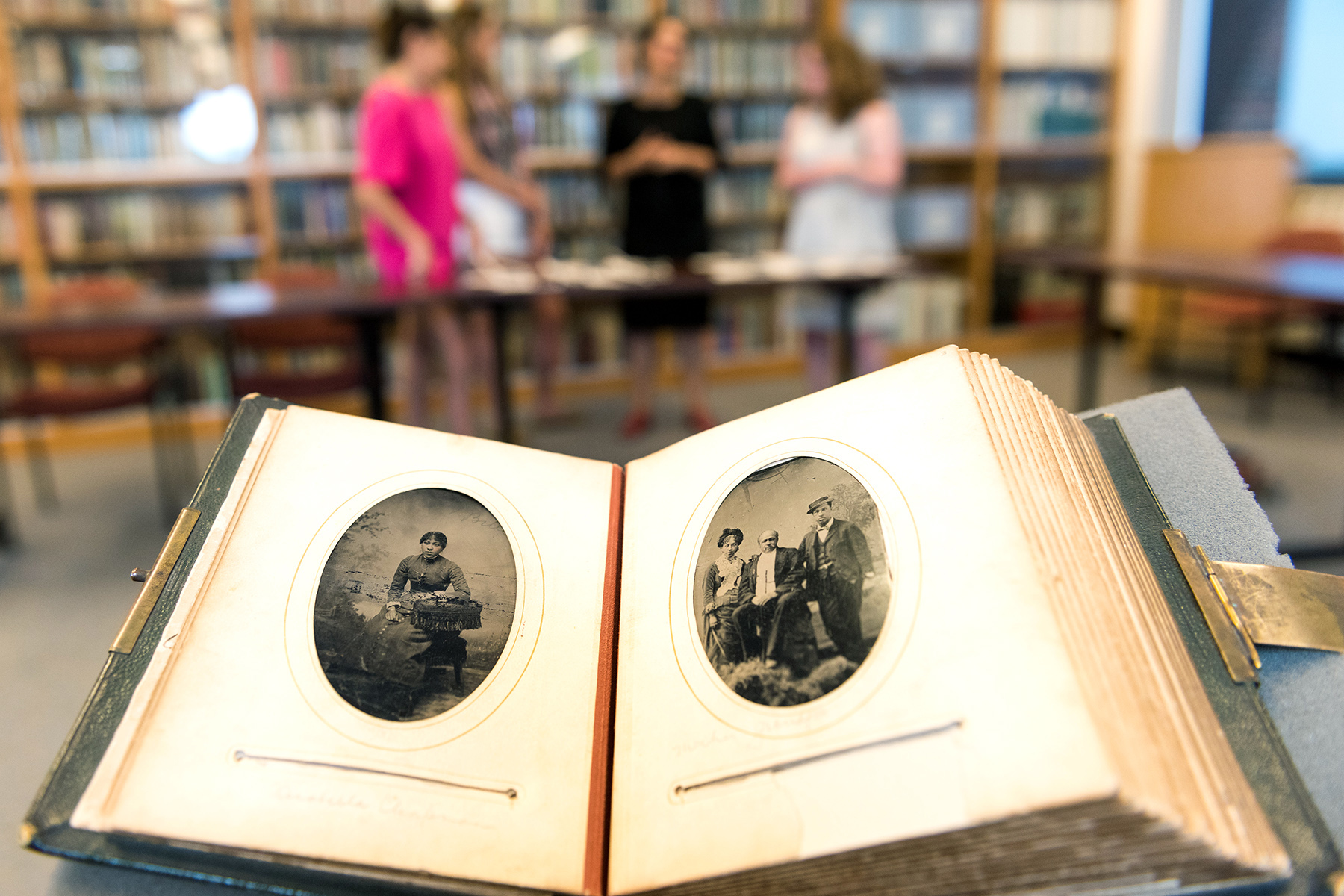 “The two albums were from the same African-American family,” Lewis said. “Single photographs of African-Americans at the turn of the 19th century are rare, and because of this, an entire family album is even more so. I knew that she would be interested in them.”

Martha Jones, who is a professor of African-American History, decided to take students with her on a journey back in time.

“I had to learn more about them,” she said. “So I made it into a project for my African-American Women’s History class to work on, and in the end, they helped conduct an amount of research during one semester that would have taken many years to complete on my own.”

Not much was known about the albums prior to the start of the class project. However, just like any family photo album passed down from generation to generation, there were plenty of clues available to guide them.

“To start, based on the inscriptions found on the inside of their covers, we knew that they belonged to an African-American woman named Arabella ‘Bella’ Chapman,” said Lewis.

From there, conservationists at the Clements Library worked with Jones’ class to carefully disassemble each page in order to gather marginalia and captions from the backs of the photographs, which included names, dates and places.

Students were tasked with linking this new information to the tools of social history—city directories, newspapers and census returns—to create a narrative for her life.

“It was exciting to see students become the historians. Instead of just learning about the subject matter, they were producing new knowledge about our country’s past,” Jones said. “Their reactions were interesting—it’s as if many of them thought that I had a book hidden away in my office with all of the answers.”

The life of Arabella Chapman 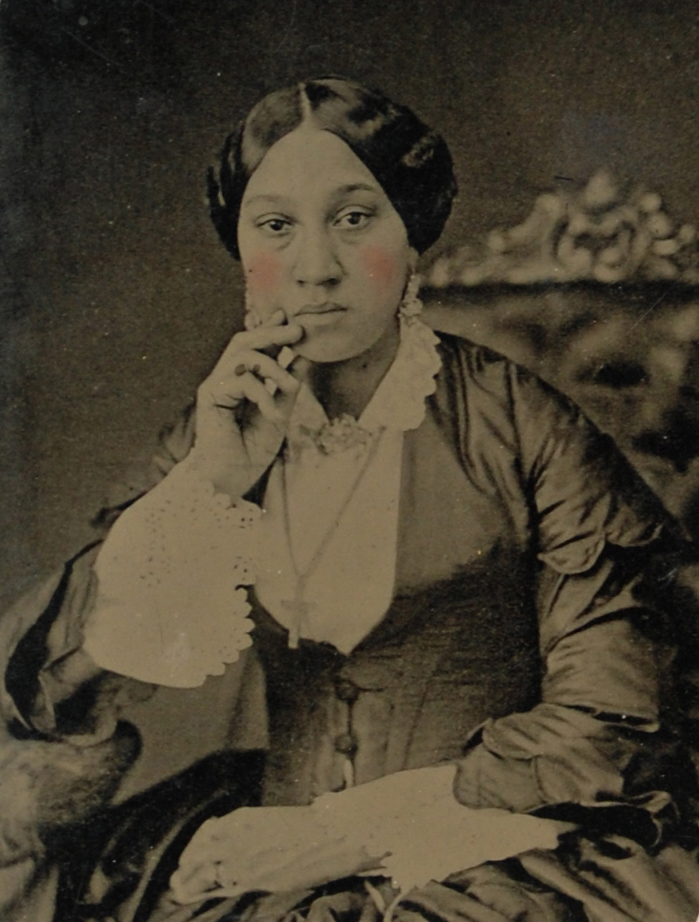 She was born in Jersey City, N.J., in 1859, less than two years before the outbreak of the U.S. Civil War and the abolition of slavery.

The students discovered that her family, including she and her parents, John R. and Harriet Alfarata, moved with her brother William, to Albany, N.Y., in 1864, where her younger brothers John and Charles were later born.

“It’s likely that they moved there because, for African-Americans in the mid-19th century, Albany held an important place in political culture,” Jones said. “It had been home to key black abolitionist activists including Stephen Meyers, whose daughter Liz is pictured in the Chapman albums.”

Arabella is best remembered for becoming the first African-American student to graduate from Upstate New York’s “Albany Free Academy”—known today as Albany High School. By 1880, she had married Clarence Miller and was living with her family in North Adams, Mass.

Jones said that the Chapman albums offer a critical view into everyday life and politics of black Americans at the end of the 19th century in this particular region of the U.S.

“Among the photos found in the albums were cartes de visita—likely mass produced—of historical figures Frederick Douglass, John Brown and Abraham Lincoln,” she said. “From their fashion to their ideologies, the unaltered albums show this family as they had hoped to be seen and remembered.”

The students from the class compiled their research in the form of a website, arabellachapman.com, where they’re hoping others may be able to pick up where they left off.

“Many of the people included in the Chapman albums are still unknown to us,” Jones said. “We invite students, scholars and the public to add to the project that now exists as a living archive, one that will grow and change over time through the insights of its users.”

The website contains a summary of the project, a biography of Arabella, documentation of the research process and scans of all 96 photos found in the two albums. 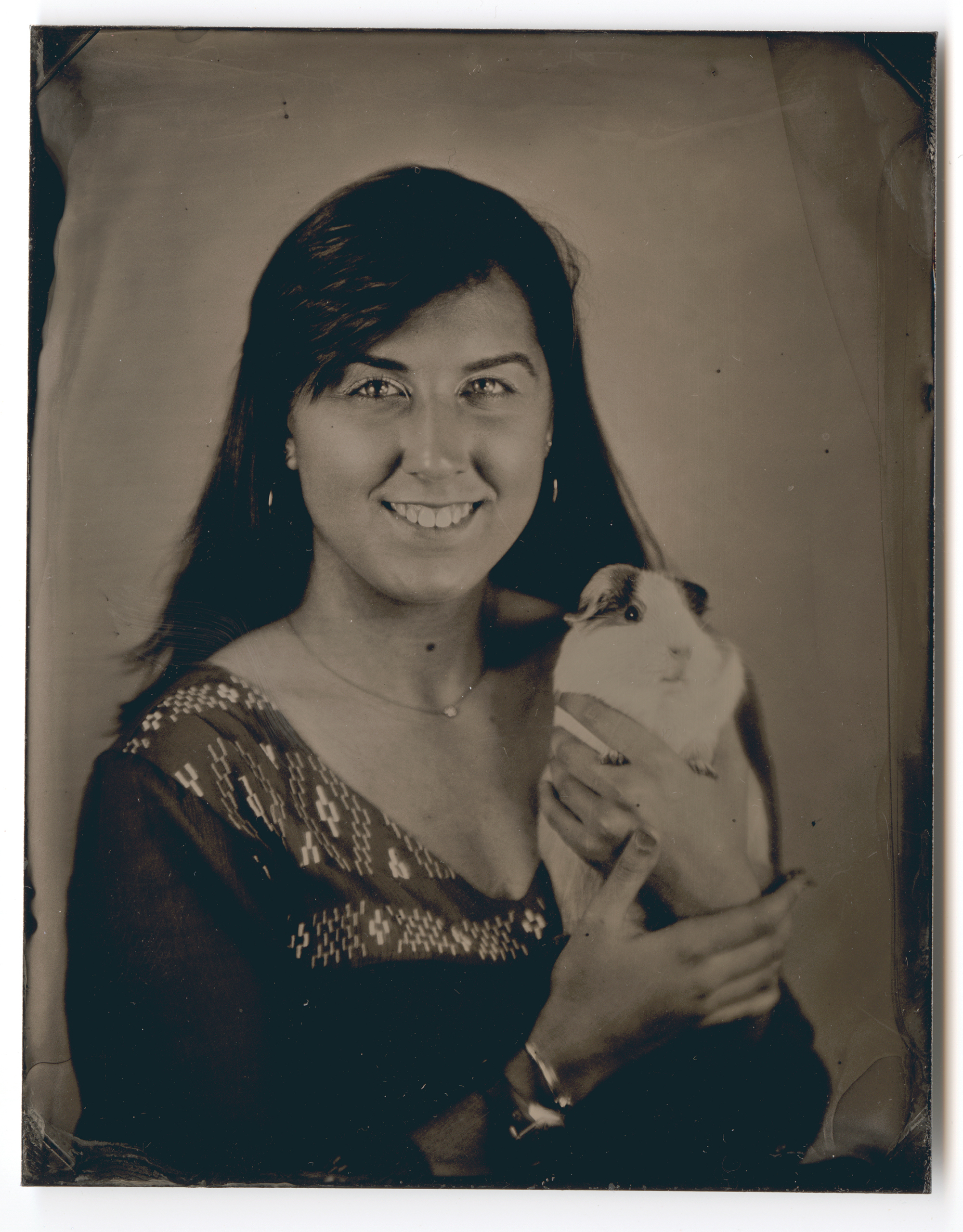 Emily Moore, 2015 Graduate, U-M Stamps School of Art & Design ​poses for her tintype photograph, taken by Shimmin and Whalen Travelling TintypistsArabella’s photo albums not only revealed to students what life was like back at the turn of the 19th century, they also provided an in-depth lesson in the history of photography and the idea of self-curation.

In the 1800s, the special occasion of being photographed often meant the dedication of an entire day. The process was laborious and often expensive.

As you flip through the Arabella Chapman albums, there are three types of photographs that appear:

With the fleeting “selfie” of the 21st century, Jones wanted her students to consider what it may have been like to have their photos taken only once or twice in a lifetime.

“There was a lot of thought that went into these portraits—they considered their wardrobe and what props they would hold. It was a really important way of recording their own self-history,” she said.

As part of the class, the students posed for their own tintype photos with Michigan-based Shimmin and Whalen Travelling Tintypists.

Emily Moore, a senior in the U-M Stamps School of Art and Design who posed with her pet guinea pig, said that it’s possible we have more in common with people from the 1800s than we think.

“Back then, the portraits were very planned out, and it was interesting to consider how a woman from that era would want to represent herself,” she said. “I’m actually not that different from Arabella—it may be easier to take a photo now, but I also have control of which ones I decide to share of myself or my life.”

“Arabella, as a woman and an African-American had to overcome much more than I have had to,” she said. “I saw a kind of strength in her portraits, and that’s how I’d like people to remember me—as a strong woman.”

The tintypes taken were processed into the Clements Library archives, where Clayton Lewis says they’ll remain.

“When the students come to the library to visit with their children or grandchildren years from now, they’ll be able to request to view them,” he said. “Just like Arabella, their images are now ‘officially’ part of the University of Michigan’s archived history.”