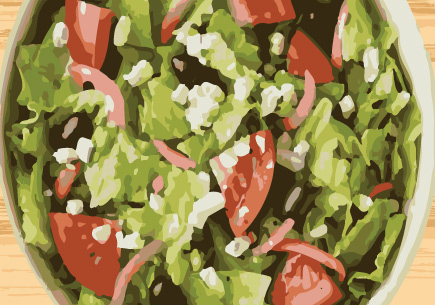 ANN ARBOR—Three low-carb meals within 24 hours lowers post-meal insulin resistance by more than 30 percent, but high-carb meals sustain insulin resistance, a condition that leads to high blood pressure, prediabetes and diabetes, according to a University of Michigan study.

The study also found that two hours of moderate-intensity exercise, which is supposed to lower insulin resistance and blood sugar levels, has no impact on these results. To the contrary, blood sugar levels increase after the exercise, said Katarina Borer, professor in the School of Kinesiology and principal investigator in a study done with doctoral student Po-Ju Lin, now at the University of Rochester Medical Center.

Insulin is a hormone critical in metabolism. Insulin sensitivity refers to insulin’s ability to efficiently respond to and regulate glucose in the blood, so that our cells can use it for energy and other functions. If we’re insulin resistant, insulin is less effective in removing glucose from the bloodstream and the pancreas must produce more insulin to help. This can eventually lead to diabetes.

The study sample was small, Borer said, but the results are significant, in part, because they reinforce results in two preceding studies and one 2015 review on high-carbohydrate diets and their negative effects on insulin.

In the U-M study, 32 post-menopausal metabolically healthy women were divided into four groups and given meals of either 30 or 60 percent carbohydrates with or without moderate-intensity exercise before meals. The low-carb group showed a reduction in insulin resistance after the third meal in the evening, but the high-carb group sustained high post-meal insulin, Borer said.

The high-carb group’s diet fell in line with the 45-to-60 percent daily carbohydrate intake the departments of Agriculture and Health and Human Services recommend, Borer said.

“We showed an acute, one-day reduction in insulin resistance after the third low-carbohydrate meal eaten in the evening, so one could argue that this is transient and insignificant,” Borer said. “But at least two other studies where high-carbohydrate meals were fed to volunteers for 5 and for 14 days show that the outcome was worrisome. These subjects developed increased fasting insulin secretion and insulin resistance, increased glucose release by the liver which produced high blood sugar, and dramatically lowered fat oxidation that contributes to obesity. These then were more persistent effects that could be a path to prediabetes and diabetes.

“What is remarkable about our findings is that they show that a simple dietary modification of reducing the carbohydrate content of the meals can, within a day, protect against development of insulin resistance and block the path toward development of prediabetes while sustained intake of high carbohydrate diets as shown in the two mentioned studies lead to increased fasting insulin secretion and resistance. And even more surprising and amazing is that exercise before the meals made the subjects more carbohydrate intolerant—that is, it increased evening blood sugar levels.”

Because exercise did not lower insulin resistance, it suggests that the insulin reaction the subjects experienced after the evening meal was driven by an intestinal response to the carbohydrate, and not by exercise. But this doesn’t mean exercise doesn’t influence insulin, she said.

Going forward, Borer’s lab will examine the timing of meals and whether insulin-lowering effect can be produced in the morning and whether blood sugar will decline when women exercise after low-carbohydrate meals.

The study, “Third exposure to a reduced carbohydrate meal lowers evening postprandial insulin and GIP responses and HOMA-IR estimate of insulin resistance,” appears in the Oct. 31 edition of PLOS ONE.