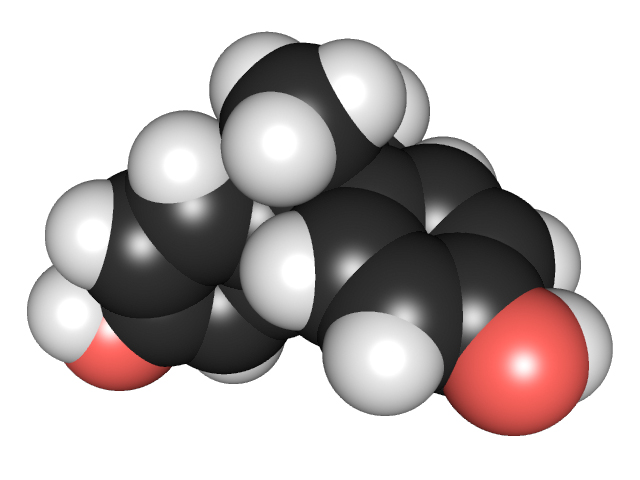 3D chemical structure of bisphenol A. Image courtesy of Edgar181 via Wikimedia CommonsANN ARBOR—New research from the University of Michigan School of Public Health found BPA, or bisphenol A, in fetal liver tissue, demonstrating that there is considerable exposure to the chemical during pregnancy.

Researchers also found a proportionately higher concentration of free BPA—as opposed to the conjugated forms modified by the body for elimination—further showing that in fetuses the ability to eliminate the chemical from the body is not the same as in adults.

“The general message from our research is that people have to be cognizant of the fact that the adult body may be able to deal with a particular exposure but a developing fetus may not,” said Muna Nahar, doctoral student in the School of Public Health’s Department of Environmental Health Sciences and first author on the paper.

Previous animal studies have associated BPA with breast and prostate cancer, and reproductive and behavioral abnormalities. Some research on effects to human health has tied BPA to cardiovascular disease, miscarriage, decreased semen quality and childhood behavioral issues. The chemical also may impact metabolism, diabetes and obesity, although more studies are required to determine its effects.

Prior research on BPA—a chemical used in many consumer products, including plastic bottles and metal food and beverage cans—has measured concentrations of the chemical in urine. About 95 percent of those who have been tested in a nationally representative health survey study show some level of BPA, but the research to date had yet to firmly establish the presence of the chemical in tissues.

Understanding the internal dose is essential to determine adverse effects on health, the researchers say. BPA can reach the body through ingestion, inhalation and by contact with the skin.

Nahar and colleagues Dana Dolinoy of the U-M School of Public Health and Chunyang Liao and Kurunthachalam Kannan of the Wadsworth Center at the New York State Department of Health studied the livers of 50 first- and second-trimester fetuses, using high-performance liquid chromatography and mass spectrometry. They found wide variances in how much BPA was present in livers, with some fetuses showing high levels of exposure.

“The finding of free BPA in fetuses is significant,” said Dana Dolinoy, the John G. Searle Assistant Professor of Environmental Health Sciences and senior/corresponding author of the study.

After measuring a three-times-higher concentration of free BPA than the conjugated forms in the fetal livers, the researchers then examined the enzymes responsible for metabolizing the chemical and compared them with those at work in adult male and female livers.

“Our research shows that the argument that it’s so rapidly metabolized is not true in fetuses,” Dolinoy said.

The study appears online in the Journal of Biochemical and Molecular Toxicology, which in early 2013 will publish a special print issue focusing on the National Institute of Environmental Health Sciences Outstanding New Environmental Scientist Award (ONES) projects. Dolinoy was awarded a five-year ONES grant in 2009 for the project titled “In Utero Exposure to Bisphenol A: Effects on the Fetal Epigenome.”