ANN ARBOR—Americans are just as concerned about energy’s impact on the environment as they are about its affordability, according to first-year results of the University of Michigan Energy Survey.

Consumers also express much greater sensitivity to higher gasoline prices than they do to higher home energy bills.

Conducted quarterly, the U-M Energy Survey takes an academically rigorous look at consumers’ individual concerns about energy, what it costs their households and their beliefs about its affordability, reliability and environmental impact. The survey is fielded in conjunction with the U-M Surveys of Consumers, the same longstanding survey that generates the widely reported index of consumer sentiment.

“This new survey is unique in how it examines personal concerns about energy as consumers view it in their everyday lives,” said survey director John DeCicco, research professor at the U-M Energy Institute. “This careful approach differs from surveys that prompt consumers for their responses on the often politically driven energy debates of the day.” 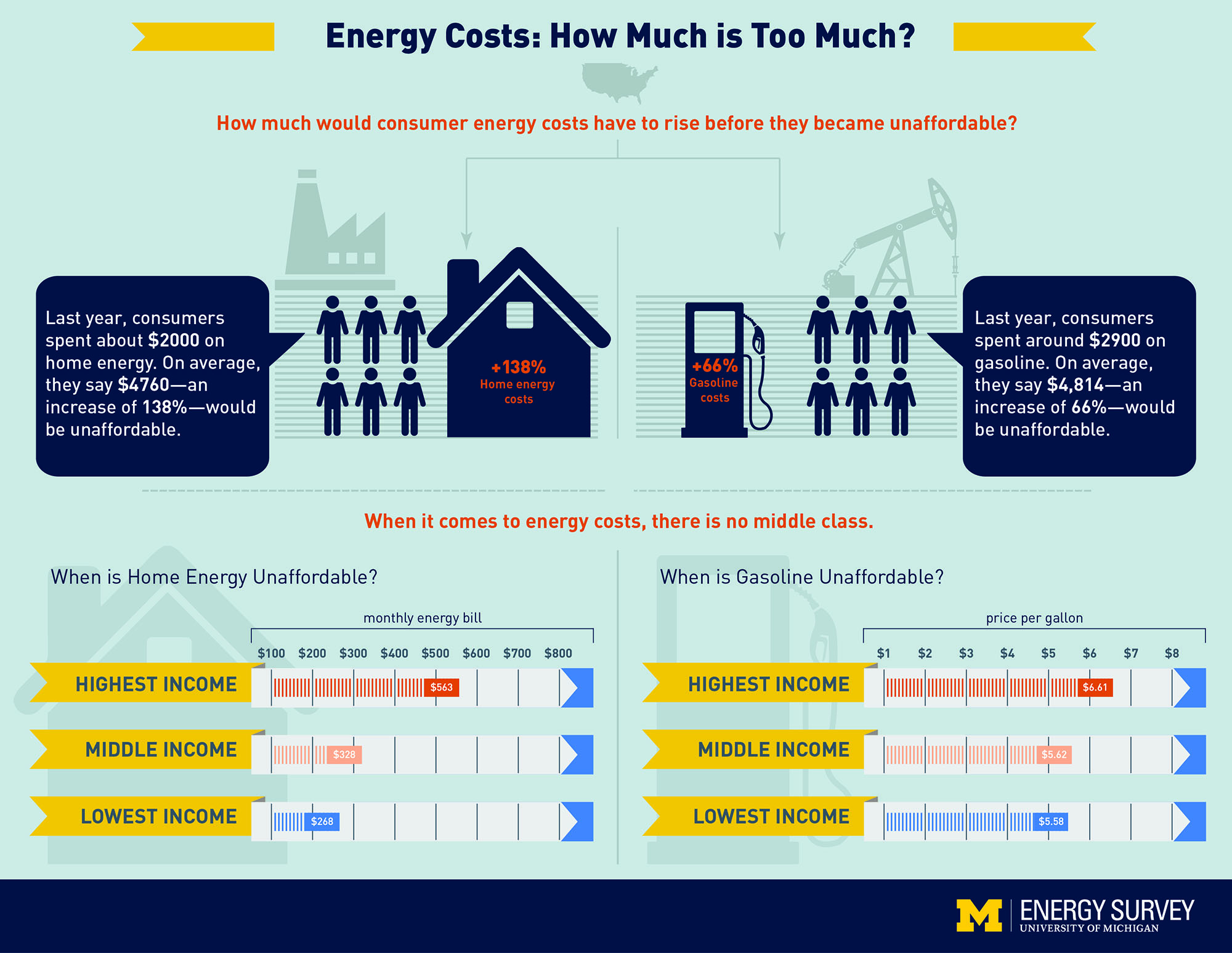 The survey’s major first-year findings include:

Most Americans feel energy is affordable. Views on affordability were probed by asking consumers how much more expensive energy would have to be before they would have to make changes in household behavior. On average, 93 percent of consumers feel that home energy is affordable and 95 percent feel gasoline is affordable (the data reported here were taken before the recent plunge in gasoline prices, and so do not yet reflect how consumers’ views might have changed).

Consumers express much greater sensitivity to higher gasoline prices than they do to higher home energy bills. On average, consumers view a 140-percent price increase as unaffordable for home energy bills. In contrast, they see a 66-percent price increase as unaffordable for gasoline. When it comes to gasoline, however, there is no middle class: both middle- and lower-income consumers say that it would be unaffordable if it hit $5.60 per gallon. In contrast, upper-income consumers would not find gasoline unaffordable until it reached $6.60 per gallon.

The University of Michigan Energy Institute
The demand for economically and environmentally sound energy solutions is urgent and global. The Energy Institute builds on U-M’s strong energy research heritage at the heart of the nation’s automotive and manufacturing industries to develop and integrate science, technology and policy solutions to pressing energy challenges. Visit energy.umich.edu.