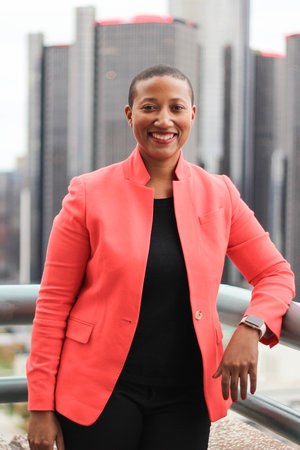 ANN ARBOR—Kimberly Dowdell, a faculty member at the University of Michigan Taubman College of Architecture and Urban Planning, was inducted as president of the National Organization of Minority Architects at the annual conference Oct. 20. Her term officially starts Jan. 1, 2019.

Representing more than 900 minority architects and students across the country, Dowdell will lead the organization for the next two years. NOMA’s mission is to champion diversity within the design professions by promoting the excellence, community engagement and professional development of its members.

NOMA aims to foster communications and fellowship among minority architects; form a federation of existing and proposed local minority architectural groups; act as a
clearinghouse for information and maintain a roster on practitioners; and promote the design and development of living, working and recreational environments of the highest quality, working across industries to leverage partnerships.

In 2008, Dowdell established the annual community service project for NOMA, which has now hosted projects in 10 cities throughout the United States.

Dowdell is invested in the legacy of minority architecture firms and wants to help firms with succession planning, as well as building a more robust pipeline of young designers into the organization to fuel heightened diversity in architecture. While African-Americans made up 13 percent of the total U.S. population at the last census, less than 2 percent of licensed architects in the U.S. are African-American.

“We are hyper-focused on building legacy,” Dowdell said. “Of the original 12 African-American architects who founded NOMA in 1971, none of their firms lived on beyond them, as far as our records show. Why is that and how do we change that?

“I envision my presidency of NOMA confronting how the architecture profession as a whole can help people and minorities, in particular, with starting firms, growing firms, sunsetting firms or creating succession plans for firms, with a strong emphasis on legacy, social impact and wealth creation.”

In addition to serving as a lecturer on the Taubman College faculty, Dowdell is a licensed architect and Partner with Century Partners, a Detroit-based real estate firm focused on equitable neighborhood revitalization. She previously co-founded SEED (Social Economic Environmental Design) to identify, measure and address triple-bottom-line issues during the design process. SEED’s mission is to “advance the right of every person to live in a socially, economically and environmentally healthy community.”