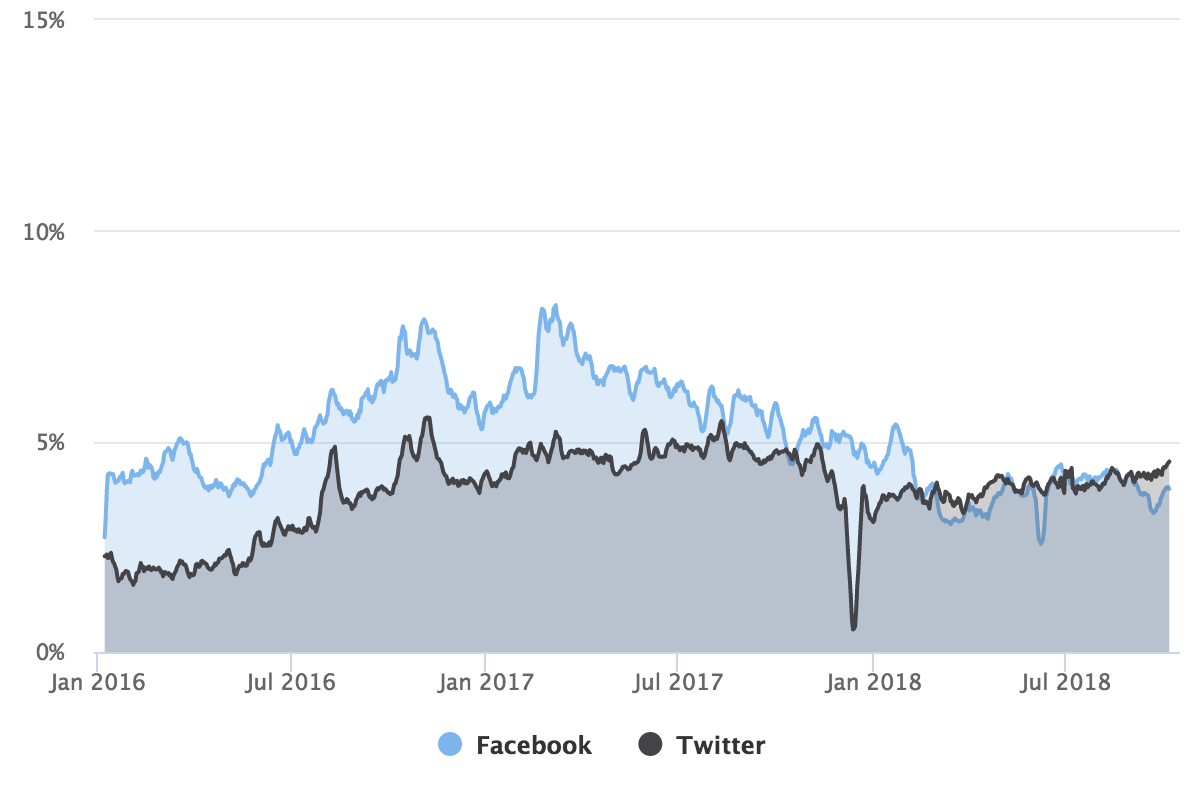 ANN ARBOR—As the crucial mid-term election approaches, the University of Michigan Center for Social Media Responsibility offers media and the public a tool to help monitor the prevalence of fake news on social media through a Platform Health Metric called the Iffy Quotient.

A web-based dashboard that shows the Iffy Quotient for Facebook and Twitter, dating back to 2016, will be updated regularly.

The Center for Social Media Responsibility, supported with funding from the Office of the Provost and Executive Vice President for Academic Affairs, is housed in the U-M School of Information. The first report issued by the interdisciplinary center confirms from a deep analysis what was suspected to be true about the 2016 U.S. presidential election: the Iffy Quotient increased dramatically on both social media sites during the election.

It also shows that the two social media platform companies have made progress since early 2017 on their promises to crack down on misinformation, but one has succeeded more than the other.

“Contributing to the accountability of social media platforms is one reason why the CSMR was created. This is an important area of focus for our faculty research. Our aim is to serve as a valued resource in the battle against misinformation.”

The School of Information announced the center in March to bring together existing campus research expertise to partner with others to address the explosive, unbridled growth of social media and its resulting challenges and opportunities. The center helps media platforms meet their public responsibilities by identifying the challenges, investigating potential solutions and measuring progress.

NewsWhip, a social media engagement tracking firm, collects URLs on hundreds of thousands of sites every day and then gathers information on which of those sites have engagements on Facebook and Twitter.

Iffy Quotient queries NewsWhip for the top 5,000 most popular URLs on the two social media platforms. Then the U-M tool checks to see if those domain names have been flagged by Media Bias/Fact Check, an independent site that classifies various sources based on their reliability and bias.

The U-M tool divides the URLs into three categories based on the Media Bias/Fact Check lists: “Iffy,” if the site is on the Questionable Sources or Conspiracy lists; “OK,” if the site is on any other list, such as Left-Bias, Right-Bias or Satire; “Unknown,” if not on any list.

Here’s what else the analysis found:

The Facebook and Twitter Iffy coefficients were roughly comparable through most of 2018 but Facebook’s is now somewhat lower. The contrast between Facebook and Twitter is even more pronounced in an engagement-weighted version of the Iffy Quotient, which we can think of as a rough proxy for the fraction of total user attention.

“By contrast with the current environment of accountability by ‘gotcha’ examples of bad outcomes, the Iffy Quotient tells us something about the overall performance of the platforms,” said Paul Resnick, founder and acting director of the center, and associate dean for research at the School of Information. “The platforms can track metrics internally with their own data, but hesitate to report them externally. By publishing continuously, we can provide accountability when things get worse and credibility for claims of progress.”

Resnick said reporters and members of the public who would like to monitor social media for the upcoming election and beyond can sign up to receive alerts when the Iffy Quotient changes.

The team plans to add other sources and additional social platforms to the tool. When that happens registered users will also receive an alert.

CSMR leaders said there are some limitations to the tool and study. Iffy sites sometimes publish reliable information but the metric treats all their URLs as Iffy. NewsWhip also may miss some popular URLs, especially from newer fly-by-night sites. Media Bias/Fact Check may not have gotten around to listing newer Iffy sites. And NewsWhip’s URLs include some that are not related to news or public affairs; the team plans to automatically filter those out in a future version of the tool.

Because of these limitations, the report authors caution against over-interpreting the Iffy Quotient.

“Trends in the Iffy Quotient over time are meaningful,” Resnick said. “The absolute number…not so much.”

CSMR’s Aviv Ovadya and Garlin Gilchrist contributed to the report.