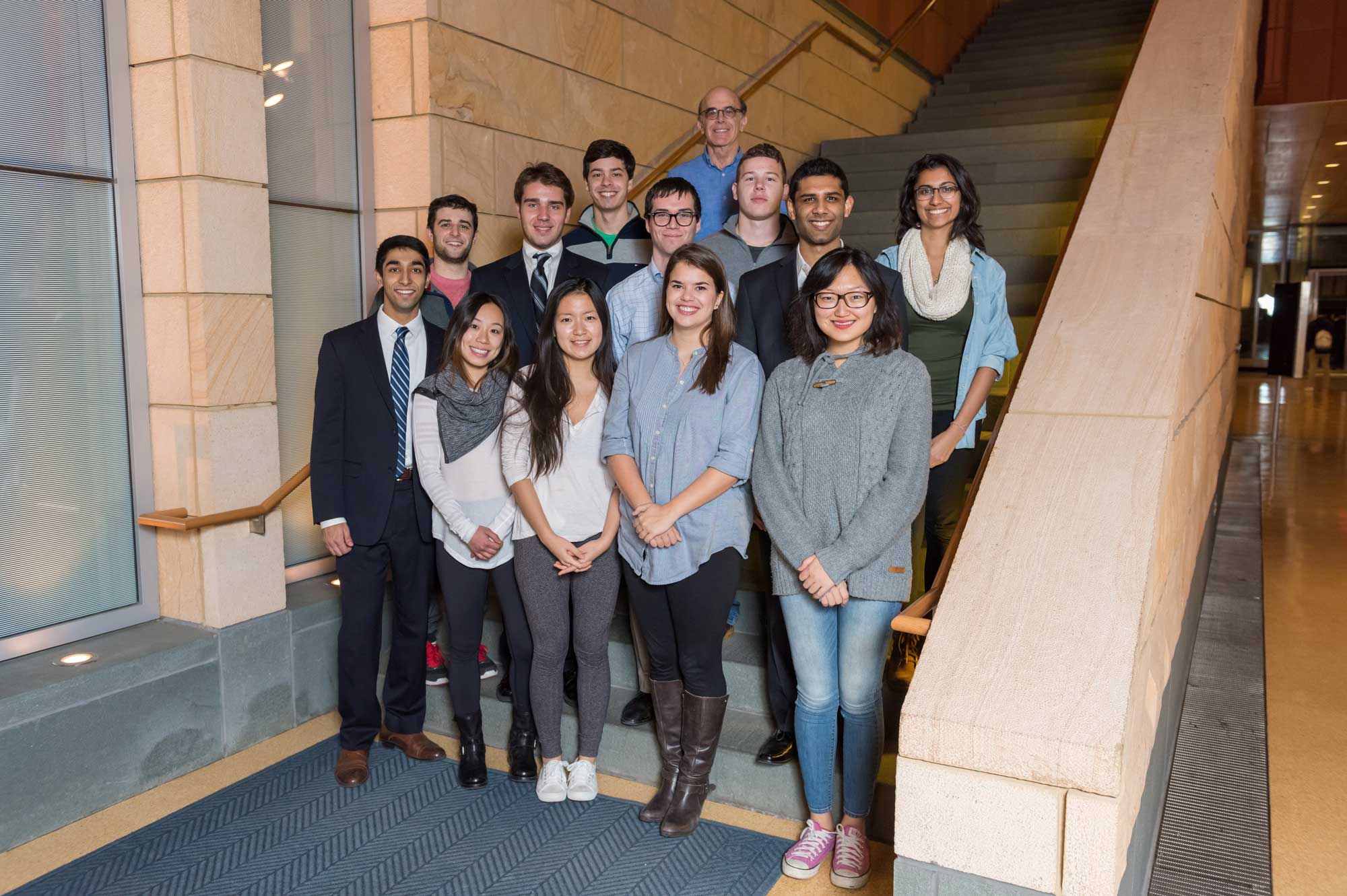 The first group of undergraduate business students to work on the Zell Early Stage Fund at the University of Michigan’s Zell Lurie Institute. They are joined by Erik Gordon, assistant clinical professor, who will teach them how to evaluate startups as potential investments. Photo taken in October, 2015.ANN ARBOR—Benjamin Rathi, a business and computer science senior at the University of Michigan, already had a successful startup under his belt when he won a spot on the Zell Early Stage Fund as a junior.

The fund, which launched in fall 2015 with a dozen juniors at the Zell Lurie Institute housed at the Ross School of Business, was created to give undergraduates a shot at learning the ins-and-outs of venture capital.

It’s modeled after the Wolverine Venture Fund, the first student-run venture fund in the nation, that launched in 1997 to provide Ross graduate students the chance to actively engage in the venture capital process. Twenty years later, the Wolverine fund has $7 million assets under management and has made investments in 27 companies.

The undergraduates were given slightly less to play with—$250,000—and are putting $150,000 of that toward their first investment target: Admetsys, a company that developed an artificial pancreas for hospital and surgical care to control glucose for patients in hospital intensive care units or who are at diabetic risk.

Under the tutelage of clinical assistant professor Erik Gordon, students spent the past 18 months learning how to evaluate ventures in the earliest stage of development—when key information, such as revenue, is missing. 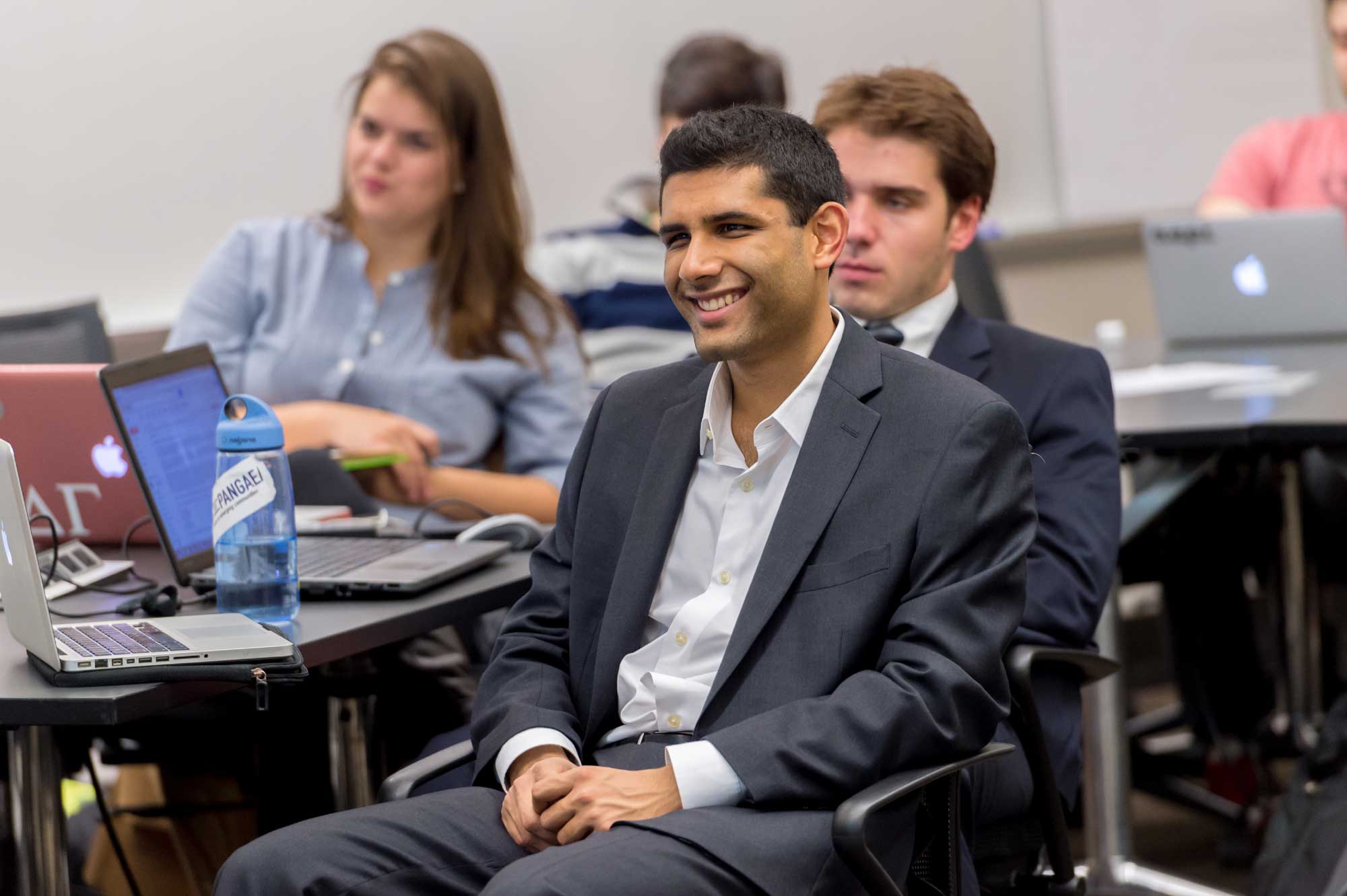 Benjamin Rathi, a senior at the Ross School of Business, reacts in Erik Gordon’s class about how to analyze companies as potential investments.“Professor Gordon brings invaluable personal experience to the classroom,” said Rathi, who led the fund’s first deal team and founded the nonprofit Blueprints For Pangaea that has sent over 30,000 pounds of unused medical supplies overseas.

“Venture capital is a tricky environment to assess. Through live practice, we have learned how to conduct thorough quantitative as well as qualitative analysis of early stage companies. It’s an honor to be granted responsibility of the fund so early in our careers.”

Gordon has been equally impressed by the students, who as seniors have helped mentor the new crop of juniors who joined the fund last fall.

“Their first investment isn’t a consumer app or something that students know about,” he said. “This one required them to figure out medical physiology, health care economics, the hospital buying process and then actually assess a medical device technology. What is the likelihood that a group of undergraduates anywhere in the world could do that?” 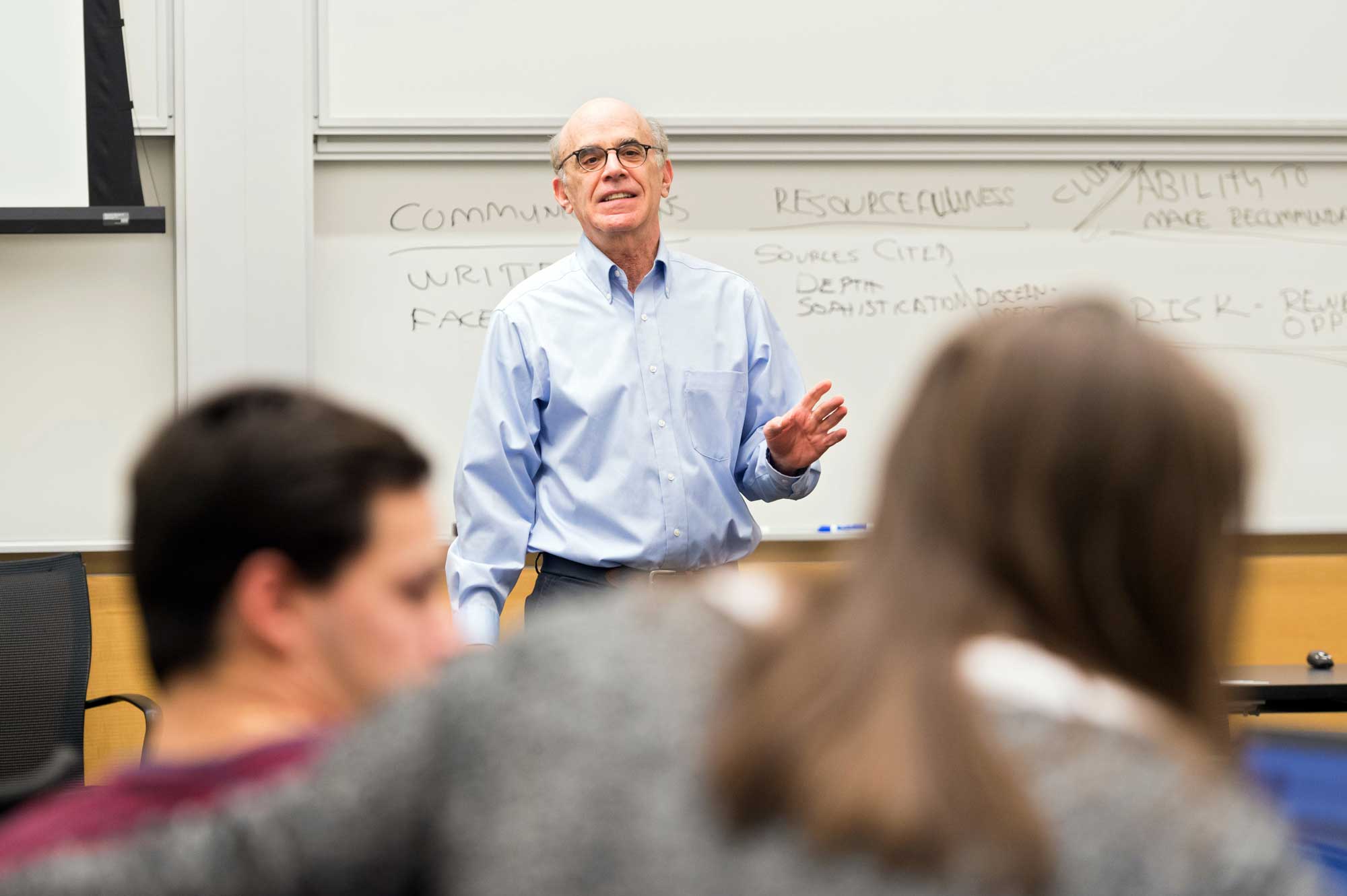 Erik Gordon, assistant clinical professor at the Ross School of Business, teaches undergraduate business students how to evaluate a company in its earliest stages for investment potential.

The fund is one of five that students can apply to work on at the Zell Lurie Institute. Others are the Wolverine Venture Fund, Zell Lurie Commercialization Fund, Social Venture Fund and Zell Founders Fund.

“The array of funds at the University of Michigan is unmatched anywhere,” Gordon said.

The Zell Early Stage Fund was structured to operate just like a real venture capital fund. Students work in deal teams. When a deal team is working on a potential investment, the team will meet often and at odd hours to get the due diligence done just like how transactional practice and investing works in the real world.

Other real-world lessons included spending time exploring companies that ended up investment dead ends; figuring out how to make decisions with high levels of uncertainty common in early stage investment; and finding a great investment and then getting knocked out by a much bigger investor.

“That was a good lesson for our students to learn. Sometimes small investors get crowded out,” Gordon said. “We are preparing them for the real world of investing, not the classroom world of investing where everything goes well. Sometimes things work out, sometimes it’s unfair, and you just have to move on to the next opportunity.”

And that’s just what they did by investing in Admetsys.

“It could be a big financial return because it could save hospitals a lot of money,” Gordon said. “If someone goes into a diabetic coma, there is no hotel in the world that costs as much as a day in the ICU. So this is really valuable device.” 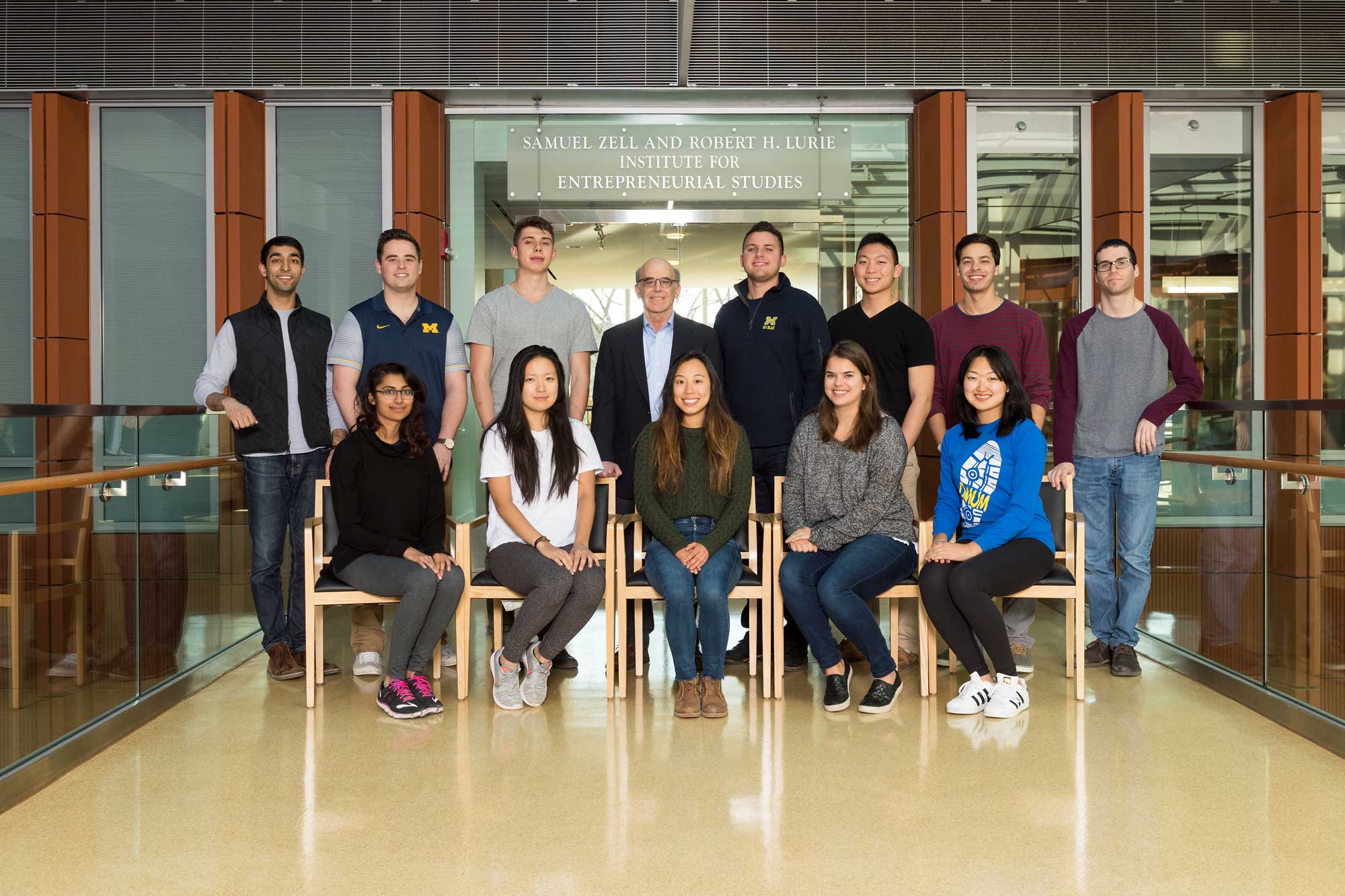 Erik Gordon, assistant clinical professor at the University of Michigan’s Ross School, stands with his students — the first group of undergraduates to work on a venture capital fund at U-M. The Zell Early Stage Fund is the fifth offered at the Zell Lurie Institute. The other four are strictly for MBA students.

Gordon was concerned initially that the undergrads may have a skewed view of financial risk because of the financial crisis that hit a peak in 2008.

“They probably saw someone’s parent lose a job. This is a cohort of students that may see risk as the problem. So they come in to an early stage fund, and we’re going to see a lot of risk,” Gordon said. “How do I get them to understand that some risks lead to financial crisis and some risk leads to most of the innovation and wealth creation we’re going to see in this country?”

“What happens with the master’s students is they have a lot of tools, they are very confident,” he said. “The undergrads have a lot of tools also, but not as much experience. Coming in with a clean slate, they are less afraid to make mistakes. Their questions and rapport were excellent. These guys focused on where this could go. They identified the opportunity first, and then looked at what could get in the way and how they could overcome that.”

Admetsys CEO Jeff Valk said all three co-founders of the company are Michigan alumni and they felt privileged that they were selected as the fund’s first investment.

“Ben Rathi was fantastic to work with throughout the process, and what Erik Gordon is building with the students in the fund is truly outstanding,” he said. “We work with a lot of universities, and this just isn’t something you see elsewhere. This is pushing frontiers forward—both advancing health care technology and redefining the impact of the university.”