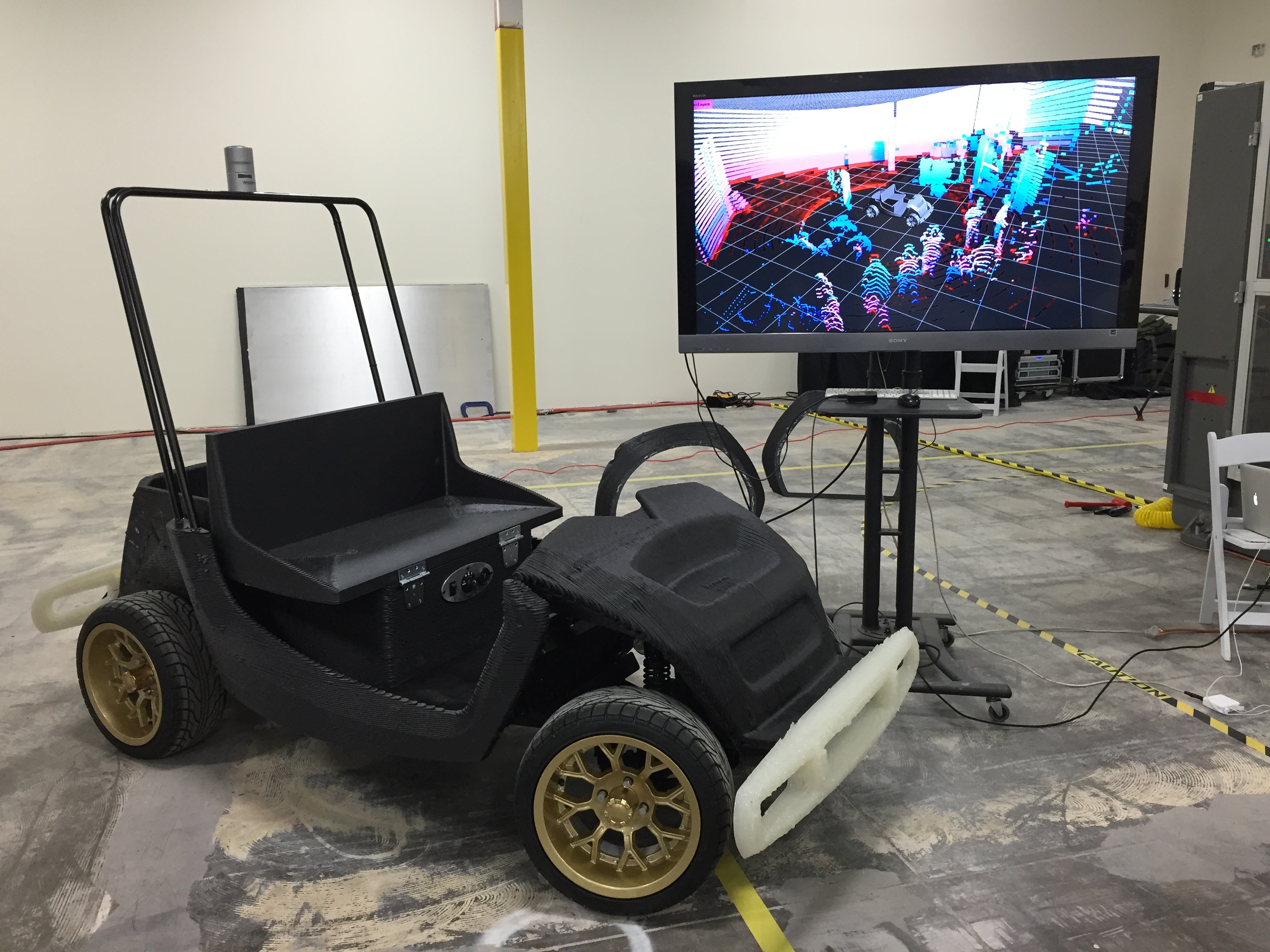 Researchers at the University of Michigan will develop autonomous capabilities for this 3-D printed low-speed electric vehicle that’s manufactured by Arizona technology company Local Motors. The screen in the background shows a laser scan of the room. Image credit: Local MotorsANN ARBOR—A fleet of autonomous “SmartCarts”—high-tech, 3D-printed, low-speed electric vehicles—could one day zip around the University of Michigan’s North Campus, taking students, professors and staff to class, labs and offices while also serving as one of the first test beds for on-demand autonomous transit.

“Think Uber, but with low-speed, autonomous cars,” said Edwin Olson, an associate professor of electrical engineering and computer science who leads the project. “The goal of SmartCarts is for us to begin understanding the challenges of a transportation-on-demand system built around autonomous cars.”

In an early step toward that goal, U-M researchers today received a custom, 3D-printed vehicle from technology company Local Motors. The company unveiled both the low-speed vehicle and its first 3D-printed road-ready car at a press conference in Tempe, Ariz.

U-M’s vehicle—one of three being built for university research—will arrive on U-M’s campus next week. Over the next year, U-M researchers will develop autonomy capabilities and build a mobile phone interface users can use to request a ride. They’ll test the vehicle at Mcity, the autonomous and connected vehicle test site that’s operated by the Mobility Transformation Center, a public/private partnership headquartered at U-M.

“On this project, we’re deliberately ‘cheating’ on the autonomy as much as we can—not because we can’t build autonomous cars, but because we need a working test bed now so that we can begin to look at all of the other challenges of an on-demand system” Olson said.

Those other challenges include understanding passengers’ preferences and expectations, coordinating the routes of a fleet of vehicles, and figuring out how to balance supply and demand.

“These factors—not just the self-driving technology—are critical to the economic viability and social acceptance of a full-scale transportation service,” Olson said.

At Mcity and later on North Campus, researchers will experiment with methods to simplify the autonomy challenges that take advantage of the smaller scale of a campus. They could add landmarks to help the vehicles navigate, for example, or even paint a blue line on the asphalt for the carts to follow. These steps help make autonomy safe and cheap, but they’re difficult to accomplish on a national scale, Olson said. Beyond college campuses, low-speed autonomous transit systems could be useful in places like corporate campuses, amusement parks, airports, assisted living communities and city centers.

U-M’s new vehicle has a power train derived from a traditional golf cart, but by working with Local Motors, the rest of the vehicle has been re-invented for this project. The body is 3D printed out of Lego brick plastic reinforced with fiber for strength. The unique manufacturing process means if the U-M researchers decide they need a bracket to hold a sensor, for example, or a more innovative dashboard without a steering wheel, Local Motors can print a new component in a matter of hours.

“The advantage is speed of design and manufacturing. The 3D printing process and our co-creation process lets us and our partners be creative fast,” said Corey Clothier, Local Motors’ autonomous vehicle lead. “We’re excited to partner with the University of Michigan on this. They’re real leaders in autonomous systems and their approach on this is brilliantly simple. We look forward to seeing it unfold.”

Later this year or early next year, U-M will receive a second vehicle and the research team will conduct a pilot at Mcity.

“Our focus is on transportation as a system,” said David Munson, the Robert J. Vlasic Dean of Engineering. “Lots of people are talking about this as the way of the future, but we’re aiming to build a test bed that will allow us to stop talking and start doing. If we can put such a system into service, it would be a huge research enabler on campus, and it would be one of only a few like it in the world.”

The pilot project is funded for one year through the Mobility Transformation Center. Along with Olson, Ryan Eustice, associate professor of naval architecture and marine engineering, will also contribute.