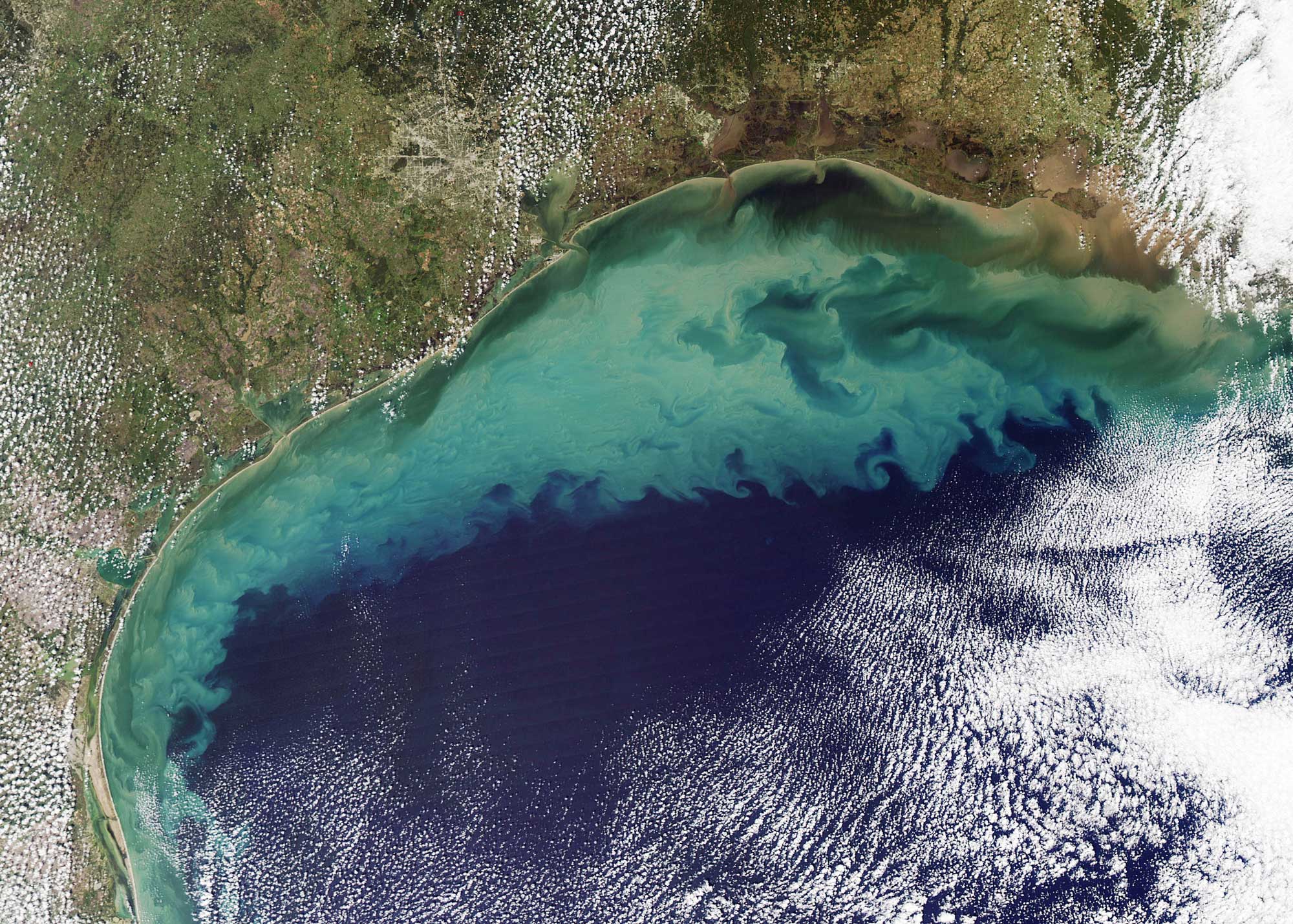 2009 satellite image of the Gulf of Mexico. Much of the dirt that colours the water is likely re-suspended sediment dredged up from the sea floor in shallow waters. The tan-green sediment-coloured water transitions to clearer dark blue water near the edge of the continental shelf where the water becomes deeper. The ocean turbulence that brought the sediment to the surface is readily evident in the textured waves and eddies within the tan and green waters. Image credit: By Jeff Schmaltz (NASA Earth Observatory) [Public domain], via Wikimedia CommonsANN ARBOR—A University of Michigan researcher and colleagues from several institutions are forecasting an average but still large “dead zone” in the Gulf of Mexico this year.

The forecast calls for an oxygen-depleted, or hypoxic, region of 5,898 square miles, an area roughly the size of Connecticut and similar to the past several years. The forecast was released today by the National Oceanographic and Atmospheric Administration, which sponsors the work.

Farmland runoff containing fertilizers and livestock waste, much of it from as far away as the Corn Belt, is the main source of the nitrogen and phosphorus that cause the annual Gulf of Mexico hypoxic zone, which is also known as a dead zone.

In its 2001 action plan—which was confirmed in 2008 and again in 2013—the Mississippi River/Gulf of Mexico Watershed Nutrient Task Force set the goal of reducing the five-year running average areal extent of the gulf hypoxic zone to 1,950 square miles by 2015. The task force is a coalition of federal, state and tribal agencies.

But little progress has been made toward that goal. Between 1995 and 2015, the gulf dead zone averaged 5,941 square miles.

“Even though the federal-state action plan calling for nutrient-load reductions has been in place since 2001, there has been little systematic reduction in those loads,” said U-M aquatic ecologist Don Scavia, director of the Graham Sustainability Institute.

“And while the latest forecast calls for an average-size dead zone in the Gulf of Mexico, it is important to recognize that these averages are unacceptable. The bottom line is that we will never reach the action plan’s goal of 1,950 square miles until more serious actions are taken to reduce the loss of Midwest fertilizers into the Mississippi River system.”

For the second year in a row, the Gulf of Mexico hypoxia forecast was based on the predictions of four computer models, with individual forecasts ranging from 5,204 to 6,823 square miles. Forecasts based on multiple models are called ensemble forecasts; the technique is commonly used to forecast hurricanes and other weather events.

“Dead zones are a real threat to gulf fisheries and the communities that rely on them,” said Russell Callender, assistant NOAA administrator for the National Ocean Service. “We’ll continue to work with our partners to advance the science to reduce that threat. One way we’re doing that is by using new tools and resources, like better predictive models, to provide better information to communities and businesses.”

The gulf forecast is based on nutrient runoff data, as well as river and stream data, from USGS. The federal agency estimates that 146,000 metric tons of nitrate and 20,800 metric tons of phosphorus flowed down the Mississippi and Atchafalaya rivers into the Gulf of Mexico in May 2016. That is about 12 percent above the long-term (1980-2015) average for nitrogen, and 25 percent above the long-term average for phosphorus.

USGS operates more than 2,700 real-time stream gauges and 60 real-time nitrate sensors and collects water-quality data at long-term stations throughout the Mississippi River Basin to track how nutrient loads are changing over time.

“By expanding the real-time nitrate monitoring network with partners throughout the basin, USGS is improving our understanding of where, when and how much nitrate is pulsing out of small streams and large rivers and ultimately emptying to the Gulf of Mexico,” said Sarah J. Ryker, acting deputy assistant secretary for water and science at the Department of the Interior. “The forecast puts these data to additional use by showing how nutrient loading fuels the hypoxic zone size.”

The Gulf of Mexico hypoxia forecast assumes typical weather conditions. The actual size of this year’s dead zone could be influenced by hurricanes and tropical storms.

The confirmed size of the 2016 Gulf of Mexico dead zone will be released in early August, following a monitoring survey from July 24 to Aug. 1, conducted on a NOAA vessel and funded through a partnership between NOAA, the Northern Gulf Institute and the Louisiana Universities Marine Consortium.

Hypoxia forecasts are part of a larger NOAA effort to deliver ecological forecasts that support human health and well-being, coastal economies, and coastal and marine stewardship.