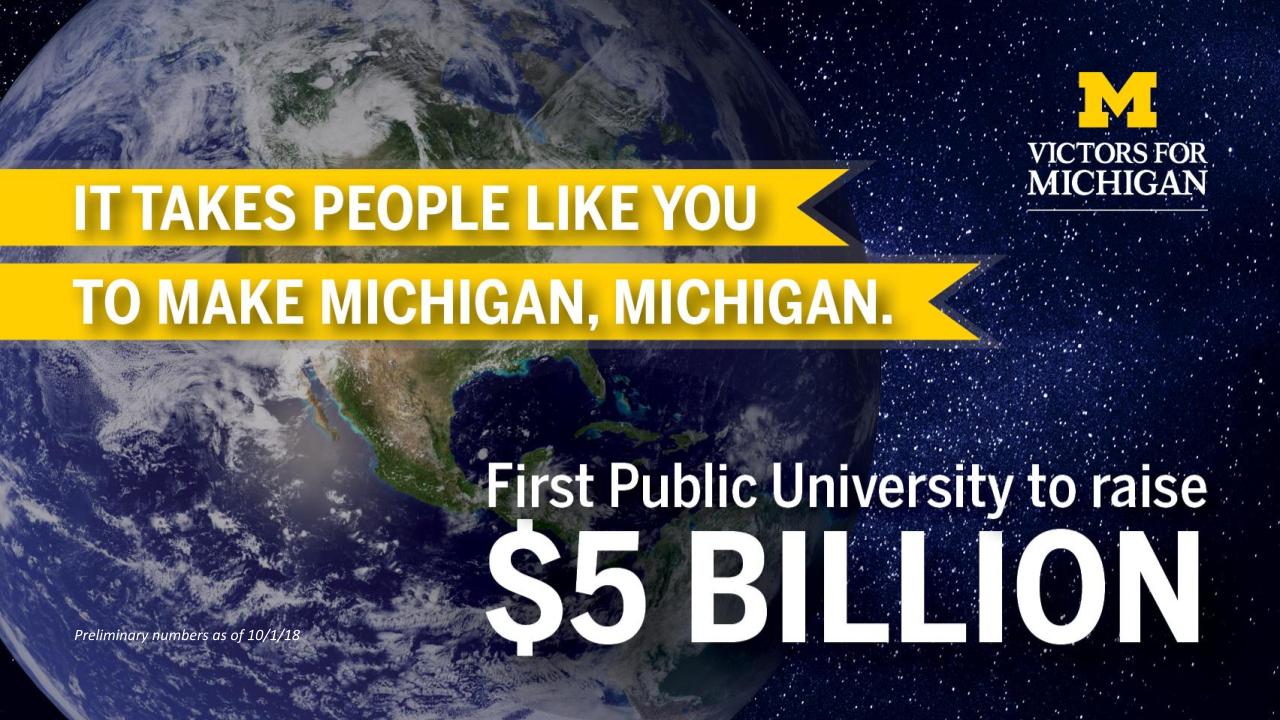 ANN ARBOR—The University of Michigan has shattered records as the first public university to raise $5 billion in the most successful fundraising campaign in its history.

With nearly three months remaining in the Victors for Michigan campaign, more than 382,000 donors have given more than $5 billion—with more than $1.1 billion dedicated to student support, the campaign’s top priority.

“The success of Victors for Michigan is further evidence of the power of the University of Michigan family, whose generosity makes excellence possible across the breadth of our three campuses and Michigan Medicine,” U-M President Mark Schlissel said. “I also thank President Emerita Mary Sue Coleman, who set a bold goal when she successfully launched the campaign publicly in 2013, and the members of our Board of Regents, whose enthusiastic support and leadership helped us reach this historic achievement.”

Of the $1.1 billion raised for students, 93 percent directly supports undergraduate and graduate scholarships and fellowships, enabling the university to provide financial aid to more than two-thirds of its 46,000 students on the Ann Arbor campus. 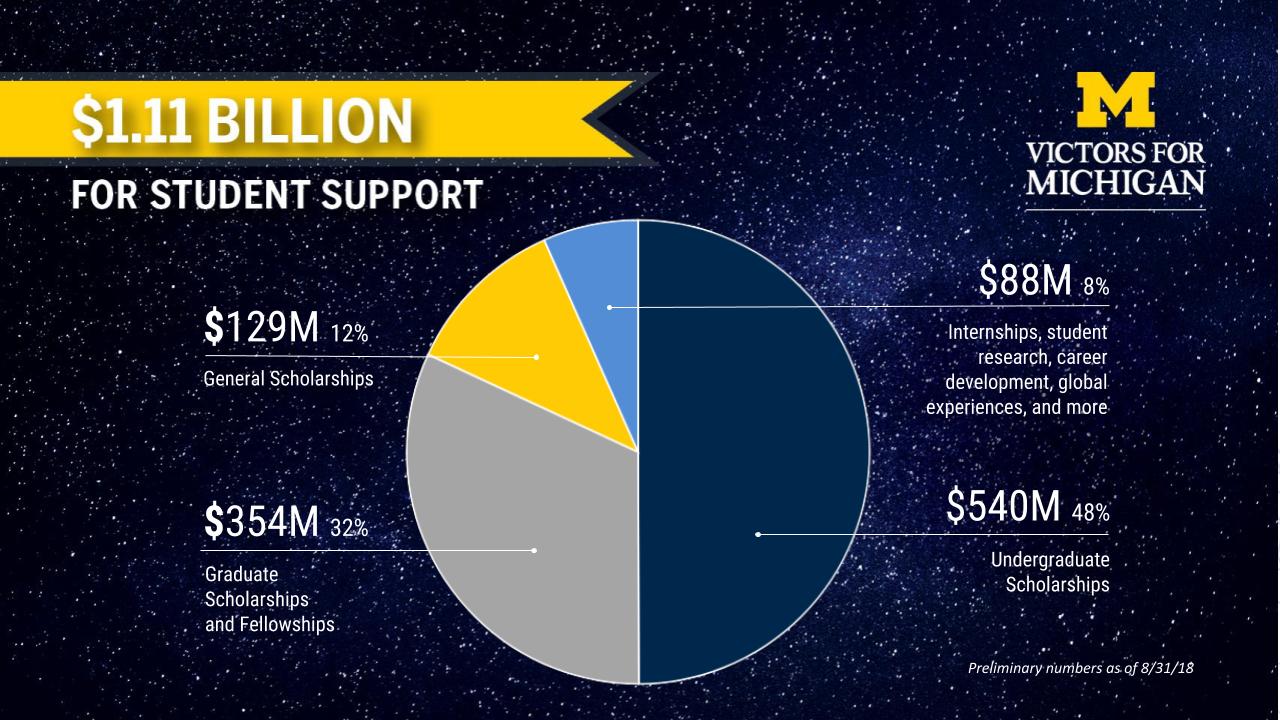 More than $1.4 billion is directed to advance patient care, research and education at Michigan Medicine, which serves more than 2.3 million patient visits per year. The balance supports one of the nation’s largest research enterprises, programmatic and engaged learning opportunities, and state-of-the-art facilities across all 19 schools and colleges in Ann Arbor as well as UM-Dearborn and UM-Flint.

Leaders credit the success of the campaign to a network of more than 1,600 volunteers around the world.

“Without our volunteers who dedicate time and service to Michigan, we could not have achieved these amazing results,” said Stephen M. Ross, campaign chair and its largest donor with gifts to the Ross School of Business and the Ross Athletic Campus. “I am thrilled with the broad base of support we’ve been able to secure through this campaign.”

Gifts of all sizes make an impact. Of more than 382,000 donors, 94 percent gave less than $5,000, and more than half made their first gift to U-M through the campaign. U-M students participated not only as recipients, but also as donors and fundraisers, with nearly 10,500 students giving more than $2.3 million. More than 2,000 faculty, staff and retirees participated. 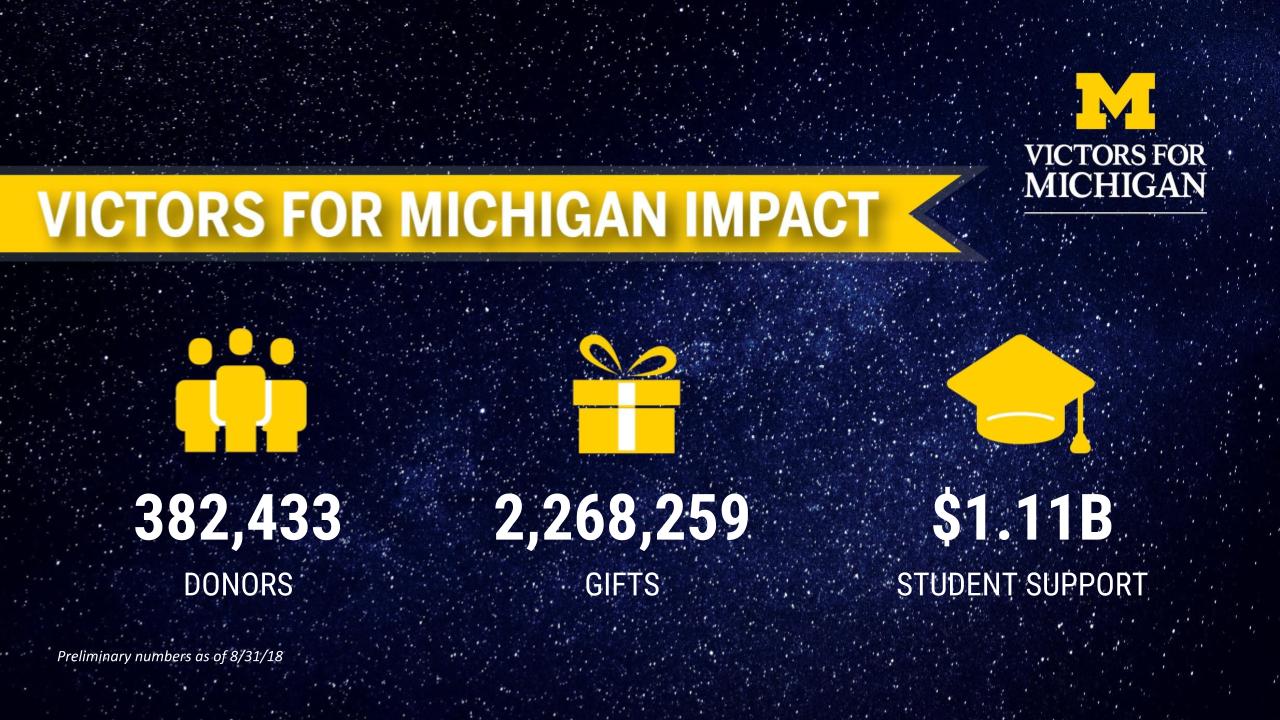 “It has been my honor and privilege to bring people together to support the amazing work happening at U-M. I’m excited to see how much more impact we can create in the next three months,” said Rich Rogel, campaign co-chair and chair of both the Michigan Medicine portion of the campaign and the Global Student Support committee.

The Rogel Cancer Center was named in honor of Richard and Susan Rogel, who committed $150 million in March of this year.

The Victors for Michigan campaign publicly launched in 2013 with a goal of raising $4 billion—the highest fundraising goal for any public university at the time—for three broad priorities: student support, engaged learning and bold ideas. Donors surpassed the $4 billion goal in April 2017 and continued to break giving records in the following two fiscal years.

Before concluding Dec. 31, 2018, the campaign has two upcoming milestones: a community-wide celebration Nov. 2 and Giving Blueday, a 24-hour day of giving Nov. 27.