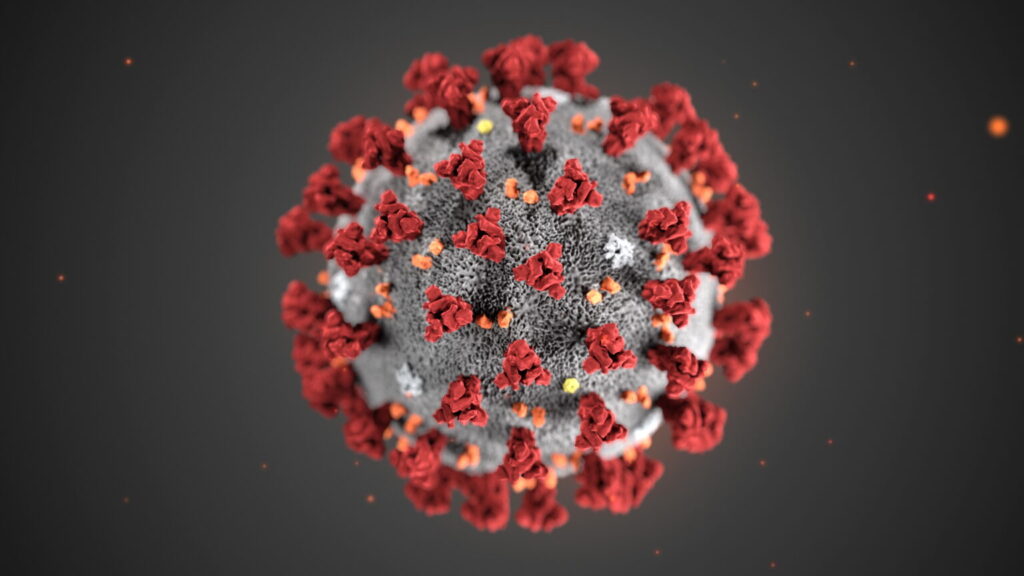 Digitally reproduced image of COVID-19 by the Centers for Disease Control and Prevention (CDC).

You’ve seen the image—a large spherical mass with protruding red spikes plastered across the television and the internet. It’s an image that has become all too familiar over the last few months.

We know it well as COVID-19, but what exactly does the image tell us other than serving as the visual representation of the pandemic? Deb Gumucio, co-founder and director of U-M’s BioArtography Project has thought a lot about the impact scientific imagery has when understanding biological diseases, viruses and the human body in the time of the coronavirus.

“Right now, the image that everyone sees is essentially being treated like a brand,” said Gumucio, also a professor emerita of cell and developmental biology at the U-M Medical School. “A lot of people look at this image and they don’t have a lot of information about it—it looks a little like some sort of menacing alien machine.”

The beauty of biology 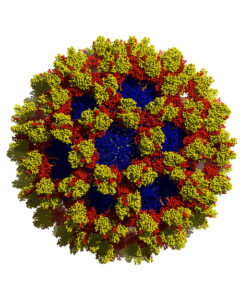 “Nasty Noro” BioArtography image. Noroviruses have a similar overall structure to coronaviruses, but noroviruses are molecularly very distinct. Noroviruses cause the majority of viral-induced diarrhea/vomiting in places where crowds gather.

Gumucio co-founded BioArtography as a fundraising initiative for U-M research labs in 1995, but over the last 25 years, it has emerged as something far greater: a way to educate the public about groundbreaking scientific research and technologies occurring at Michigan Medicine and beyond.

Gumucio and her team take microscopic images from current and past biological research, and a committee composed of U-M scientific researchers and professors at the U-M Stamps School of Art & Design select the most striking, dynamic images to display and sell. Proceeds from the sale of the work help support the training of our next generation of researchers.

“You’ve probably never seen your pancreas, or brain, or cells under the microscope, and if you did without knowing what it was, they would probably look a bit like an abstract blob,” Gumucio said. “That’s because when you first look under a microscope at a tissue, you don’t see much of anything because cells and tissues are transparent for the most part, with the exception of plant cells and tissues.”

According to Gumucio, in order to see tissues and cells under the microscope, researchers have to stain them with color. There are many common stains; for example, a blue color stain is often used to indicate a cell nucleus, and a red stain is commonly used for fats. These stains, and sometimes, added color and modifications in Photoshop, make the colorful images offered by Bioartography.

BioArtography’s images are symmetrical, colorful and strikingly shaped. Yet beyond the color and artistic form, the shapes and figures that make up the image are extremely important in understanding how the human body functions. That’s precisely the goal of BioArtography—to demonstrate that these powerful, beautiful images can also be used as a teaching tool.

Gumucio says that it is easier to talk to nonscientists about complex biology and research using visuals.

“People may be fearful when they first hear about technologies, such as human embryonic stem cells, or organoids, but the images produced at BioArtography makes this science approachable,” she said. “The art it creates is an entryway into science. For example, when you look at the image of the coronavirus, you might think, ‘What are those spikes on the surface? How does this tiny thing make us sick?'” 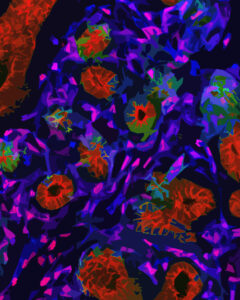 “Breathe In.” This image shows a developing mouse lung. In the developing lung, blood vessels (pink/blue spindly cells) must form very close to air spaces (outlined in red), so that oxygen and carbon dioxide can be easily exchanged. In COVID-19, these connections are interrupted by inflammatory cells, leading to acute respiratory distress.

How does that famous image of the coronavirus, created by the medical artists at the Center for Disease Control and Prevention, compare to the work done by BioArtography?

The popular coronavirus image is actually a digital reproduction. While the images that Gumucio creates as part of her BioArtography process are from actual photo-micrographs, she says that the image we’ve seen circulating is a helpful visual tool.

“It gives you a fairly accurate picture of the way the virus is put together,” she said. “Those spikes on the outside are really there and they’re what gave the virus its name—’corona’ comes from the word crown in Latin, and those spikes bind to the receptor on a cell and allow the virus to enter it.”

Like each image that BioArtography produces, the coronavirus’ spiky ball tells a story, and that story has become an important visual cue about public health and safety.

She notes that the digital microscopic rendering of the virus is a good thing, and could actually serve as a constant public health reminder.

Though the image doesn’t often come with an explanation, people should know that it is a visual representation of how they have the power to destroy those proteins if they wash their hands thoroughly.
Deborah Gumucio

“Though the image doesn’t often come with an explanation, people should know that it is a visual representation of how they have the power to destroy those proteins if they wash their hands thoroughly,” she said.

According to Gumucio, the problem with the coronavirus image is that it is being treated as a brand for the virus, and not as the educational tool that it should be.

“I’d like to see more captions and more people talking about what the image can actually tell us,” she said. “BioArtography promotes the idea that every single image that we generate is unique and tells a unique story about the image researched.”

Gumucio wants us to think about the image in a different way the next time we see it.

“There is a lot of fear about the virus and the image that represents it,” she said. “If people had more information to help them understand it, I think they’d feel a bit more confident that there are ways to defeat it.”