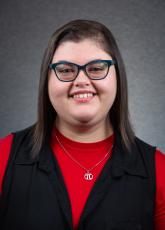 School of Information graduate student Marilu Duque has been selected as the University of Michigan’s first recipient of the George J. Mitchell Scholarship.

The Mitchell Scholarship is an initiative of the U.S.-Ireland Alliance and provides 12 Americans with the opportunity to pursue a year of graduate study in Ireland and Northern Ireland. It is named after former U.S. Sen. George Mitchell, in recognition of his work on the Ireland-Northern Ireland peace process.

The annual scholarship is one of the nation’s most prestigious academic honors, and one of the few founded and led by a woman. The 2022 class of Mitchell Scholars will begin their studies in September 2021.

“I am beyond honored to be named a Mitchell Scholar,” Duque said. “Being chosen means that I will spend a year building meaningful bonds with fellow scholars and the people of Ireland, while joining a community of people truly passionate about creating positive change in their respective fields.”

Her work focuses on national security, cybersecurity and machine learning. She became interested in studying cybersecurity in Ireland while conducting her current master’s thesis at U-M.

After learning about Ireland’s National Cybersecurity Strategy, which made citizen security and privacy protections a top priority, Duque identified a master’s program in applied cybersecurity at Technological University Dublin, where she will study.

Duque, who is from Deltona, Florida, is a first-generation American born to Cuban and Dominican parents. Before joining the master’s program at U-M’s School of Information, she earned her bachelor’s in integrated digital media at New York University.

Being a Mitchell Scholar enables first-generation students like myself the opportunity to learn about Ireland directly and gain new perspectives on how our work may impact diverse international communities.
Marilu Duque

“Being a Mitchell Scholar enables first-generation students like myself the opportunity to learn about Ireland directly and gain new perspectives on how our work may impact diverse international communities,” she said.

Duque was selected from an applicant pool of 453 students, 70% of whom were women. Half of the finalists were people of color and 30% were from schools not previously represented.

“Not only has she excelled in a STEM field herself, she has offered a hand up to the next generation of Latina women pursuing STEM careers as the NYC Regional Lead for the Hispanic Heritage Foundation’s Code as a Second Language program and by telling her own story at various conferences,” said Henry Dyson, director of U-M’s Office of National Scholarships and Fellowships.

U-M students interested in pursuing the Mitchell Scholarship or similar national fellowships and scholarships can look at the ONSF website for resources and contact information. ONSF works with students throughout all 19 schools and colleges at U-M.

The recruitment process for the 2023 class of the Mitchell Scholarship—as well as the Rhodes, Marshall and Gates Cambridge scholarships—begins in January 2021.