ANN ARBOR—Saying it is time for Academic Innovation at the University of Michigan to take a next step forward, President Mark Schlissel announced today a commitment of $50 million to support new models for education and provide learning experiences that are global, engaged and lifelong. 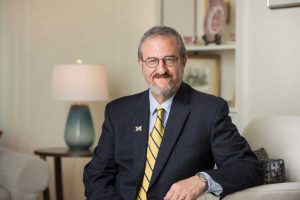 The funding, $10 million a year for five years, will allow the university to advance its work in curricular innovation, educational data and research and educational technology, Schlissel said.

“We can transform the educational experience and provide access to Michigan excellence for millions of learners,” he said. “And we will further establish U-M’s leadership in shaping the future of learning—and the future of higher education.”

During his annual leadership breakfast Oct. 3, Schlissel also announced the Center for Academic Innovation and the appointment of James DeVaney as the center’s founding executive director.

In 2014, what was first called the Office of Digital Education and Innovation was established to help faculty explore creative ways to use technology and digital programs.

The office name changed to Academic Innovation in 2016, at which time it was named a presidential initiative. Growing rapidly at that time with more than 5 million online enrollments in more than 100 courses—including three new MicroMasters programs.

U-M also launched its teach-out series that academic year. Teach-outs are short, online learning opportunities that—like the teach-ins of the 1960s that launched at U-M—are focused on emerging topics. MicroMasters are programs that allow students to take online courses that could lead to an invitation to complete a residential degree upon admission through the normal process.

Today, the Center for Academic Innovation has more than 160 massive open online courses and teach-outs on three online platforms: Coursera, edX and FurtureLearn. It has more than 8 million enrollments from 190 countries.

A portfolio of digital tools that were either nurtured or developed at the center by student fellows and faculty innovators touch thousands of students on U-M’s campus and other institutions around the world. More than 92% of U-M undergraduates have used at least one of the tools.

“We share our work broadly with other institutions and bring innovators in to further our expertise,” Schlissel said. “In other words, the center fully aligns with the public mission of U-M. I believe our potential is virtually unlimited as a result.”

Michigan has been a national leader in online learning, hosting other institutions with the Teach-Out Academy, Gameful Learning Summer Institute and Data Showcase, and exchanging learning models, new pedagogy and R&D practices with partners at other higher education institutions.

The center has incorporated into its vision three values that will guide its work: extend academic excellence; expand public purpose; and end educational privilege.

The president described innovations like Gradecraft and Viewpoint, which allow personalized learning and take into account students’ diverse backgrounds and unique learning styles.

Many of U-M’s massive open online courses allow learners to gain certification that can bolster current work or lead to new career paths.

The hybrid design of a number of programs help remove barriers of access for learners at different stages of life and in their careers, allowing them to take courses online before coming to campus to finish their degrees, in some cases.

DeVaney said the president’s investment will allow Academic Innovation to continue to build upon the success of experimentation and the creation of a culture of innovation.

“More than 200 faculty innovators, 100 student fellows and dozens of like-minded institutions have already joined our team in a multidimensional effort to reimagine higher education and the future of learning,” DeVaney said.

“Now, with President Schlissel’s commitment to establish a new center, we are able to support even more opportunities at the intersection of academic excellence and public purpose and to engage new partners across a nationwide academic innovation network in ending educational privilege.”

In the past two weeks, the center announced the partnership with online platform FutureLearn and an XR initiative.

The U.K.-based FutureLearn partnership begins with the launch of three courses:

The XR initiative recently announced by U-M Provost Martin Philbert seeks to advance the university’s work in extended reality—which encompasses virtual, augmented and mixed reality technologies. A dedicated space for XR exploration will be in the Duderstadt Center on North Campus.

This fall, the center launched the Academic Innovation at Michigan Event Series for faculty and staff to explore issues at the intersections of teaching and learning, technology, and diversity, equity and inclusion.

In addition, the first classes began for two online master’s degrees—one in public health and the other in applied data science. The latter, in the School of Information, has a robust enrollment of 150 students representing 15 countries, including 9% underrepresented minorities and two U.S. veterans. Applied data science is one of the fastest growing careers, and demand is high for trained professionals.