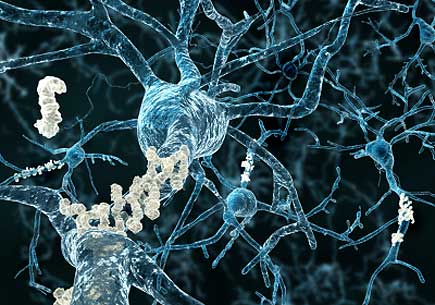 ANN ARBOR—Exactly how Alzheimer’s disease kills brain cells is still somewhat of a mystery, but University of Michigan researchers have uncovered a clue that supports the idea that small proteins prick holes into neurons.

The team also found that a certain size range of clumps of these proteins are particularly toxic to cells, while smaller and larger aggregates of the protein appear to be benign.

The findings, which appear in the journal PLOS ONE, add important detail to the knowledge base regarding this disease that affects 5.4 million Americans in 2012 but remains incurable and largely untreatable. The results could potentially help pharmaceutical researchers target drugs to the right disease mechanisms. 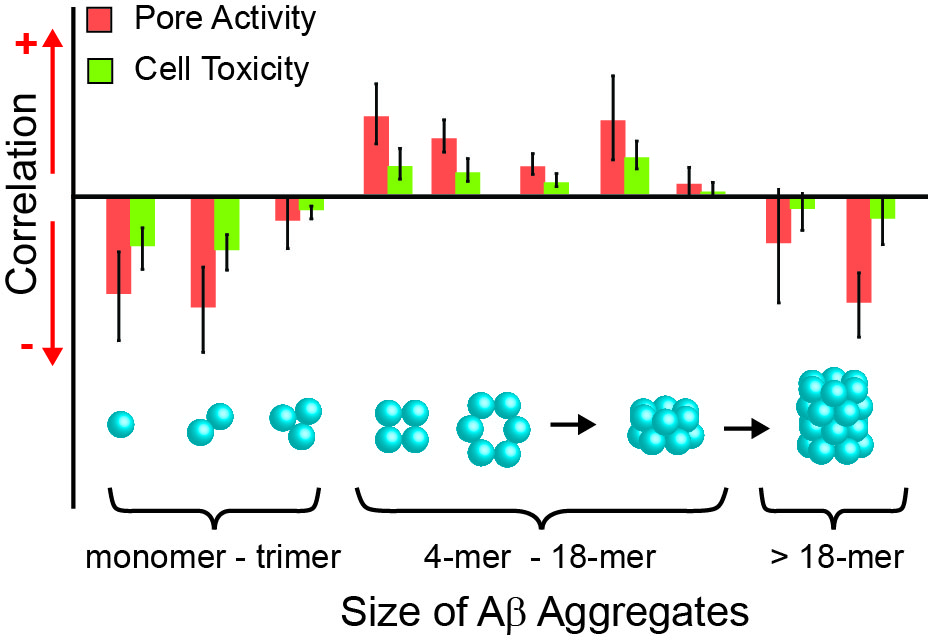 Complex statistical analysis suggests that medium size clumps of Amyloid-beta proteins kill nerve cells by punching holes in them, while smaller clumps and larger fibrils of Amyloid-beta appear to be protective. Amyloid beta is suspected to cause Alzheimer’s disease. Image credit: Erik YuskoSmall proteins called amyloid-beta peptides are the prime suspect for causing cell death in Alzheimer’s. They make up most of the senile plaque fibers found in the brains of autopsied patients. Researchers offer several hypotheses for how the peptides might cause the disease. They blame inflammation, oxidative stress or an imbalance of calcium ions possibly caused by holes in the cell membranes.

The U-M findings strongly support the idea that amyloid peptides damage the membrane around nerve cells and lead to uncontrolled movement of calcium ions into them. Calcium signaling is an important way that cells communicate and healthy cells regulate its flow precisely. The toxic mechanism implicated in the new study could act on its own or together with the other proposed courses and ultimately lead to a loss of brain cells in patients, the researchers say.

“There’s a good chance Alzheimer’s is caused, at least in part, by four- to 13-peptide aggregates that punch holes in cells and kill them gradually after prolonged exposure,” said Michael Mayer, an associate professor of biomedical engineering and chemical engineering who led the research.

“The size range of amyloid clumps that we identified as the most pore-forming was also the most toxic. The correlation is staggering. In the conditions of the culture dish, these results strongly suggest that pore formation by amyloid-beta is responsible for neuronal cell death.”

“The better the research community understands how Alzheimer’s operates, the more likely we are to develop effective treatment.”

Using observation and sophisticated statistical analysis, the team explored whether the peptides’ tendency to poke holes in cell membranes correlated with the death of actual cells under the same conditions.

To conduct the experiment, Panchika Prangkio, a Ph.D. student in Mayer’s lab, formed amyloid-beta aggregates in water over 0, 1, 2, 3, 10 and 20 days. She measured how well amyloid clumps of various sizes punched pores in a lipid bilayer that mimicked a cell membrane. And, separately, but with the same amyloid samples, the team observed how many cells died and determined which size amyloids were in the sample at each time point. The researchers used cells from a human nerve cell cancer line.

Their finding that mid-size amyloid clumps are most toxic supports recent theories that individual peptides as well as longer amyloid fibers might be protective, rather than harmful, the researchers say. The smallest and largest aggregates were negatively correlated with cell death, which suggests they may bind with the dangerous mid-length clumps and trap them in a nontoxic form.

The work could help advance the search for Alzheimer’s treatments that would work by blocking pore formation by mid-sized amyloid-beta clumps. And they could raise questions about the potential efficacy of drugs (such as Bapineuzumab) that aim to remove large aggregates of amyloid beta

“The better the research community understands how Alzheimer’s operates, the more likely we are to develop effective treatment,” Mayer said.

The paper is titled “Multivariate analyses of amyloid-beta oligomer populations indicate a connection between pore formation and cytotoxicity.” It is a collaborative effort with the research group of Jerry Yang, an associate professor of chemistry and biochemistry at the University of California, San Diego, and David Sept, an associate professor of biomedical engineering at U-M. Funding was provided by the Wallace H. Coulter Foundation with support from the Alzheimer’s Association, the National Science Foundation and the government of Thailand.