Understanding the ‘membrane’ in membraneless organelles

Organelles within cells are tiny engines encapsulating processes that allow the cells to live.

But scientists have recently discovered that some organelles are not bound by a membrane, and studying these compartments in bacteria could open doors to understanding how to make some bacteria thrive, and how to thwart others.

Over the last decade, scientists have realized that eukaryotic cells—cells that contain a membrane-bound nucleus and organelles—also use what are called membraneless organelles. These membraneless organelles confine a variety of processes for the cells to be able to function properly, says Anthony Vecchiarelli, assistant professor of molecular, cellular and developmental biology at the University of Michigan.

Now, a U-M review led by graduate student Christopher Azaldegui and including Vecchiarelli and Julie Biteen, associate professor of chemistry and biophysics, demonstrates how membraneless organelles also operate within bacterial cells. The review characterizes 10 examples of membraneless organelles found in a variety of bacteria, which may be regulated/formed by a process called liquid-liquid phase separation. 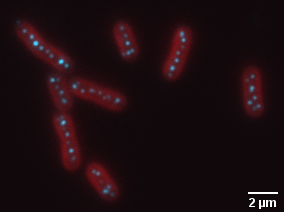 Pictured is a fluorescence image of cyanobacteria, in red, with carboxysomes, in cyan. Image credit: Biteen and Vecchiarelli Labs

“You can think of it like when you mix oil with vinegar: they both remain liquid, but they separate from one another,” Vecchiarelli said.

Liquid droplets form when biomolecules such as proteins and nucleic acids such as RNA separate from the cytoplasm of the cell. These liquid droplets assemble through weak interactions—either protein-protein interactions or protein-nucleic acid interactions. These membraneless organelles are involved in a wide variety of processes in bacteria such as metabolism, chromosome organization, chromosome segregation, cell division, pathogenesis and DNA replication, translation and transcription.

It’s important to understand how these membraneless organelles work because they are much more responsive than membrane-bound organelles to changes in their environment including the temperature, the acidity of the cell cytoplasm or the nutrient availability in the cell. For example, Azaldegui describes a transporter in the bacterium tuberculosis that may undergo phase separation to assemble the machinery necessary for tuberculosis’ virulence. Disrupting that liquid-liquid phase separation would disrupt the bacterium’s disease development.

Aside from their ability to produce toxins, cyanobacteria are also responsible for fixing almost 35% of all global carbon, in large part due to the carbon-concentrating ability of the carboxysome
Anthony Vecchiarelli

“Aside from their ability to produce toxins, cyanobacteria are also responsible for fixing almost 35% of all global carbon, in large part due to the carbon-concentrating ability of the carboxysome” Vecchiarelli said. “Understanding how the carboxysome removes carbon dioxide from our atmosphere certainly has important roles in understanding how to mitigate climate change.”

Scientists are just now beginning to identify membraneless organelles in bacteria because bacteria are so much smaller than eukaryotic cells—on the order of 10 to 100 times smaller, says Azaldegui. With this review, Azaldegui hopes to provide a platform to study membraneless organelles in bacteria in a more standardized way—in this case, using a technique called super-resolution microscopy, a technique he develops in the lab of Julie Biteen.

“By using fluorescence microscopy to detect and precisely pinpoint the position of one molecule at a time, we can resolve organization and motion, even inside of bacterial cells. This approach is particularly important because it is compatible with living cells,” said Biteen, associate professor of chemistry and biophysics.

The lasers and sample preparation do not harm the cells, and fluorescence imaging is performed in a standard benchtop microscope, as opposed to electron microscopy which requires a vacuum atmosphere in which cells cannot live.

“In Professor Biteen’s lab, we have developed super-resolution microscopy tools which break the conventional limit of resolution to actually see structures at the 10 to 30 nanometer scale,” Azaldegui said. “I started thinking of how these tools would be quite useful in studying membraneless organelles, and how I can develop a more rigorous and quantitative way to assess these droplets in bacteria.”