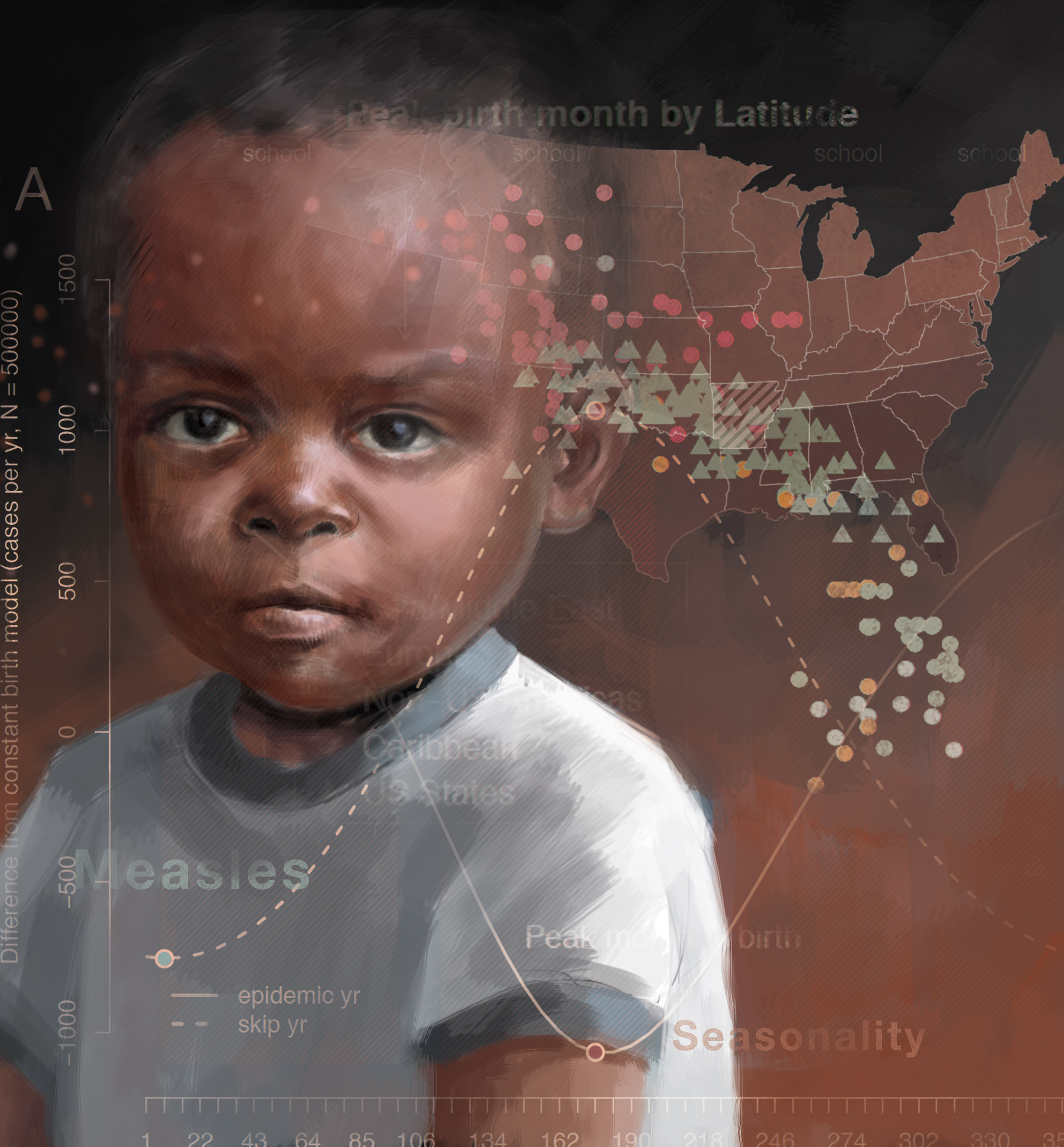 By accounting for season variation in the timing of human births, University of Michigan researchers are hoping to improve the effectiveness of vaccination campaigns in developing countries. Painting by John MegahanANN ARBOR—Nearly 4 million children under 5 die from vaccine-preventable diseases worldwide each year, and two University of Michigan doctoral ecology students are working to change that.

By taking into account seasonal fluctuations in birth rates, massive vaccination campaigns in the developing world could inoculate more unprotected infants and significantly reduce the number of deaths from diseases like measles, according to Micaela Martinez-Bakker and Kevin Bakker of the U-M Department of Ecology and Evolutionary Biology.

“If you have lots of kindling, you can have a bigger fire, and that’s essentially the role that these susceptible infants play during measles outbreaks. If lots of new births flood into the population before a measles epidemic peaks, they can add fuel to the flames and make that year’s epidemic bigger,” said Martinez-Bakker, an NSF Doctoral Fellow whose work is supported by the U.S. National Science Foundation.

“There are predictable times of year when we know there are going to be more infants being born, and we hope that in the future this information will be used to help control epidemics,” she said.

The husband-and-wife research team studies how birth seasonality—the variation in the timing and strength of birth pulses throughout the year—can shape outbreaks of childhood infectious diseases.

Wildlife disease ecologists have known for years that the timing of birth pulses helps shape epidemics of various animal diseases, and the U-M researchers wanted to know if the same is true for humans.

They digitized 78 years of monthly birth records from every U.S. state and obtained more than 200 data sets from countries across the Northern Hemisphere, then fed the information into a disease transmission model for measles to examine the implications of birth seasonality on childhood infections.

They found that the timing and magnitude of seasonal birth pulses could significantly alter the size of a measles epidemic.

A paper detailing their findings is scheduled for online publication April 1 in the journal Proceedings of the Royal Society B. Department of Ecology and Evolutionary Biology faculty researchers Pejman Rohani and Aaron King are co-authors.

Measles is a childhood disease that is often spread at schools, where youngsters congregate and swap germs. Martinez-Bakker and Bakker show that years before they enter school, unvaccinated infants also play a significant role in disease transmission and can worsen a measles epidemic.

If you have lots of kindling, you can have a bigger fire, and that’s essentially the role that these susceptible infants play during measles outbreaks. Micaela Martinez-Bakker

Public health officials could use these birth seasonality insights to optimize mass vaccination campaigns, such as the measles and polio efforts the World Health Organization conducts in Africa, the eastern Mediterranean and Southeast Asia. The timing of those once-a-year efforts could be adjusted to assure that they include infants recently added to the population, according to Martinez-Bakker and Bakker.

Demographers have known since the early 1800s that the number of human births varies from season to season. In the United States, early studies of vital statistics in various U.S. regions established a national-level seasonal pattern of births with troughs in the spring and peaks in autumn. Over the decades, various factors have been advanced to explain these patterns—income, culture, race, holidays, rainfall, cold winters and even the seasonally variable quality of sperm—but no single driver of birth seasonality has been identified.

Bakker recently gained access to long-term birth records from more than 70 African and Southeast Asian countries. As part of his dissertation, he will determine the relative roles of birth rate, the timing of birth peaks, and the magnitude of those peaks in epidemics of childhood infections.

Those signals should be fairly easy to spot in African data, he said, because birth rates and the strength of seasonal birth pulses are high there, and endemic childhood diseases are common.

As part of the study reported in the Proceedings of the Royal Society B, Martinez-Bakker and Bakker also uncovered patterns in U.S. birth seasonality that previous, much more limited investigations had identified without exploring in depth.

In the United States, the U-M researchers found that the timing of annual birth pulses varied with latitude, with northern states exhibiting a spring-summer peak and southern states showing an autumn peak.

They compiled a Northern Hemisphere data set that includes information about 730 million births. They describe their demographic data set as “the most extensive spatiotemporal data set on human births to date.”