Urban agriculture in Detroit: Scattering vs. clustering and the prospects for scaling up

Despite Detroit’s reputation as a mecca for urban agriculture, a new University of Michigan-led analysis of the city’s Lower Eastside, which covers 15 square miles, found that community and private gardens occupy less than 1% of the vacant land.

Even so, gardens on Detroit’s Lower Eastside, which has one of the city’s highest vacancy levels, play an important role in reducing neighborhood blight and have the potential to provide other significant benefits to residents in the future, according to the new study.

To maximize those benefits—which include improved access to fresh food, increased community cohesion and reduced stormwater runoff—the new study recommends scattering future gardens across the landscape, rather than clustering them in a few places. 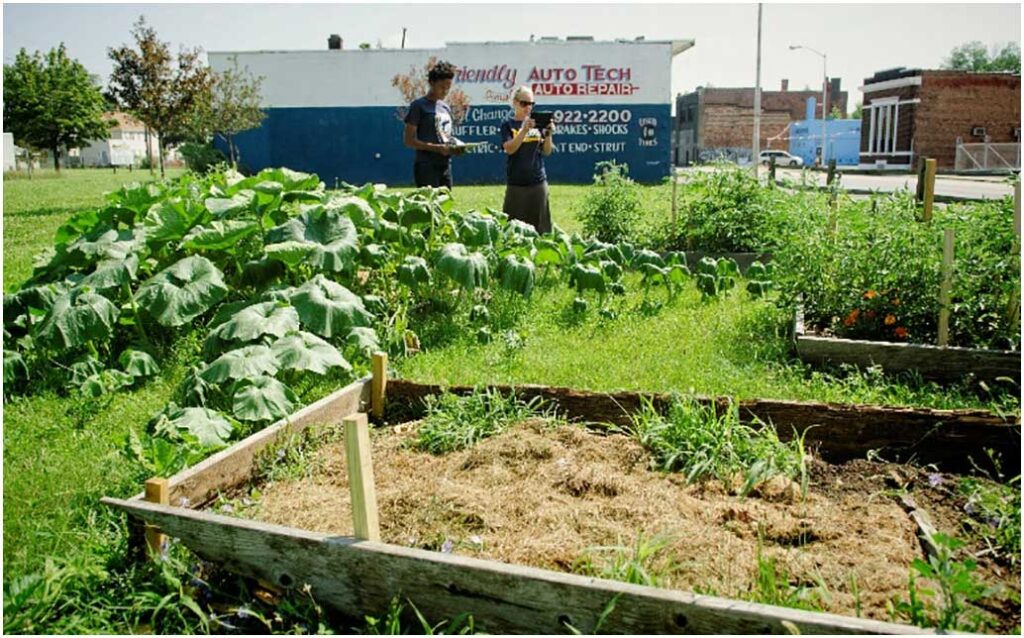 “Despite the abundance of vacant land and Detroit’s media image as a hub of urban agriculture, we were surprised to find a relatively low level of private and community gardens in the Lower Eastside,” said study lead author Joshua Newell, an urban geographer at U-M’s School for Environment and Sustainability.

“As urban agricultural production scales up, our modeling recommends dispersing rather than clustering these gardens. This strategy would provide more benefits to more people, while countering the gentrification effects that may occur when cities expand green space.”

The study, which the authors describe as the most comprehensive integrated assessment of Detroit urban agriculture to be published in a peer-reviewed academic journal, appeared online March 25 in the journal Cities. Co-authors are from Illinois State University, Michigan State University and Arizona State University.

Detroit’s Lower Eastside borders the Detroit River and includes the Indian Village, Jefferson Chalmers and East Village neighborhoods. It represents about 10% of Detroit’s land area, and 95% of the residents are minorities, according to the new study. 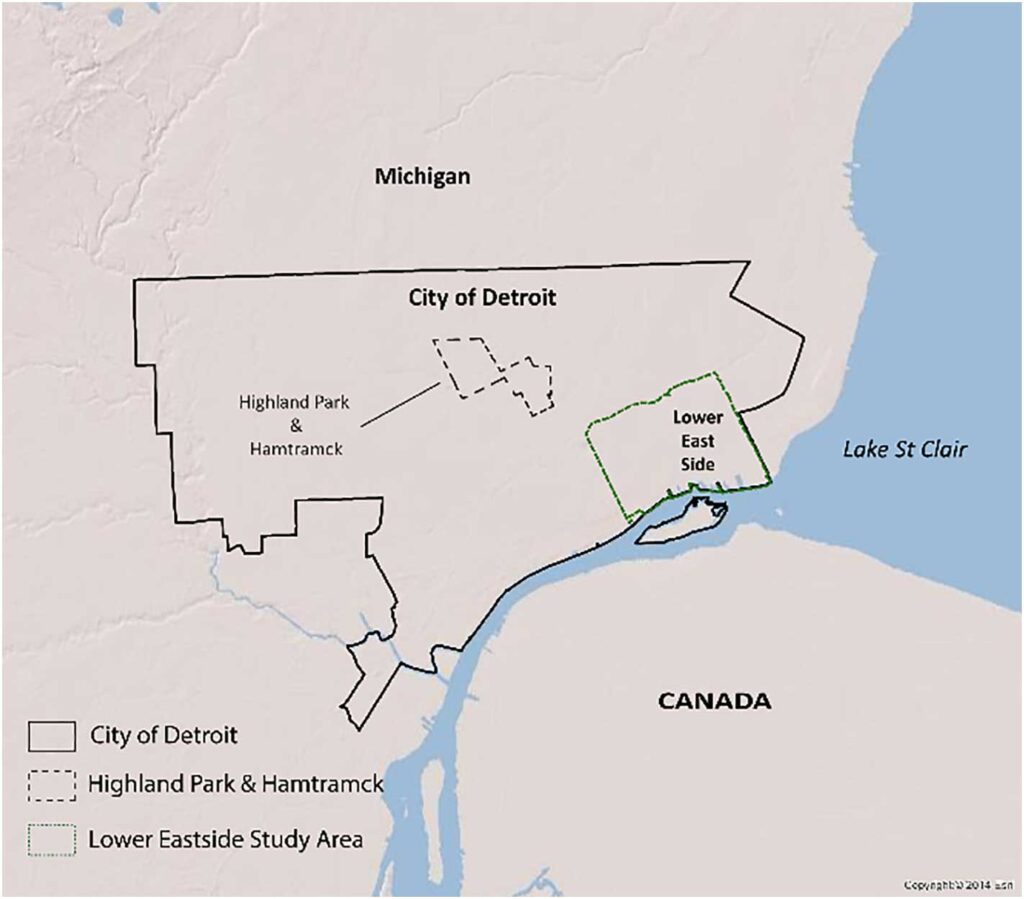 To map and document urban agriculture sites in Detroit’s Lower Eastside, the researchers used Google Earth Pro in conjunction with Geographic Information Systems analysis and site visits. In addition, Lower Eastside residents were interviewed to gain insights about their motivations for gardening.

The information was used to generate a future land-use scenario that would maximize the benefits of urban agriculture in the study area. Specifically, the researchers used spatial multicriteria evaluation modeling to identify parcels where planting gardens and growing crops would be especially beneficial.

Each location (38,541 parcels were analyzed) was given a suitability score based on 11 criteria, including proximity to: blight, grocery stores, existing gardens and parks.

The modeling results led the team to recommend a spatially dispersed strategy, in contrast to centralized urban agriculture-type developments such as Detroit’s Hantz Woodlands, which is in the Lower Eastside study area. That project, originally conceived as the world’s largest urban farm and named Hantz Farms, was later scaled back, renamed and refocused on growing hardwood trees.

Exactly how Detroit should expand urban agriculture has been hotly contested, and much of the debate has focused on the relative merits of large, centralized efforts versus smaller, decentralized approaches. The new Lower Eastside study comes down squarely on the side of smaller-scale efforts that are spatially dispersed.

For their study, the researchers collected data from two years, 2010 and 2016, and measured the changes that occurred over time. They identified 53 gardens, totaling 4.8 acres, in Detroit’s Lower Eastside in 2010. Just over one-third of the gardens were communally managed. 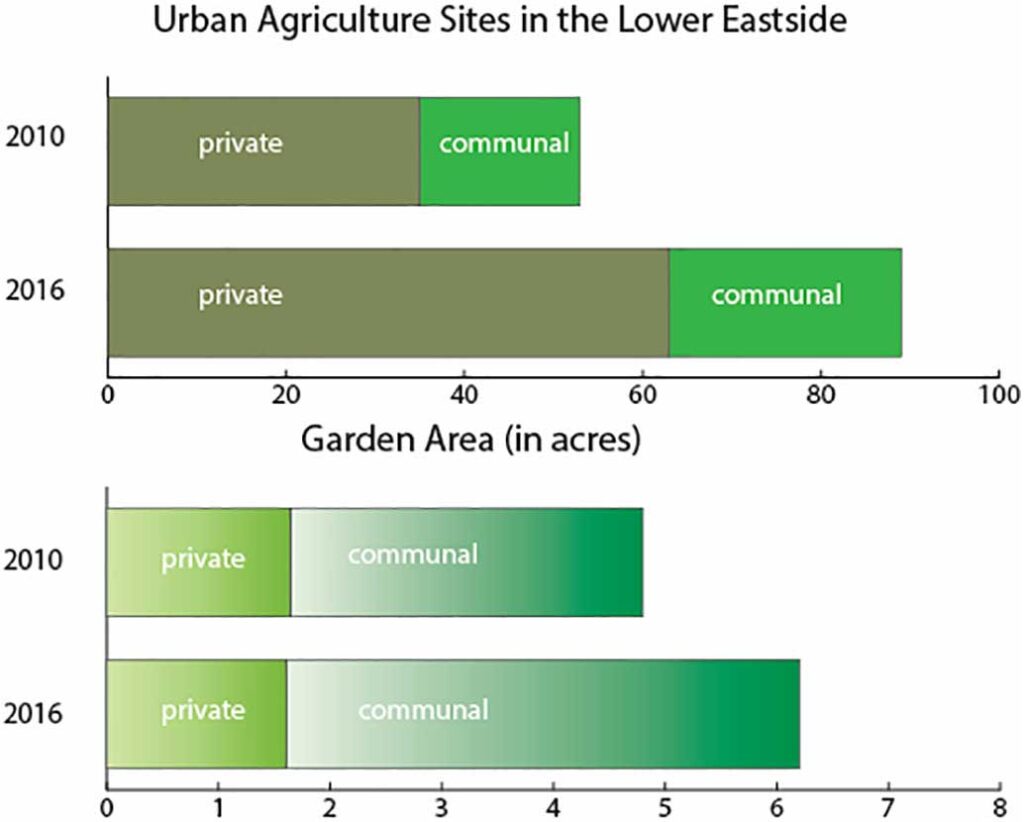 By 2016, the number of gardens in the study area increased to 89, expanding to 6.2 acres. But even with this expansion, the 2016 acreage total represented less than 1% of the estimated vacant land (1,747 acres) in the Lower Eastside, according to the study.

Comparing the two years also highlighted the ephemeral nature of urban agriculture in Detroit. Between 2010 and 2016, 14 of the 53 gardens were lost, but 50 new gardens were added.

In a study of 2019 that is under review and is expected to be published later this year, Newell and his colleagues found an additional 13 gardens in the Lower Eastside that year, raising the total to 102.

Obstacles to scaling up urban agriculture in Detroit include uncertainties about future land access, ineffective government policies, lack of capital investment, and legacy contaminants, according to the study.

“Access to permanent land tenure is the primary obstacle to the expansion of urban agriculture in Detroit and many other cities,” said study co-author Alec Foster of Illinois State University. “Urban gardens on vacant lots are often thought of as temporary solutions until traditional redevelopment options arise.”

“An urban farm,” one resident told researchers, “really becomes a platform for reconnecting the broken pieces that make up Detroit.”

“Instead of blight, we’re looking at beautiful trees and a garden and flowers, and something that’s sustainable, that people can actually look at and say, ‘Wow, that’s beautiful,'” another Lower Eastside resident told researchers.

“These interviews show that urban agriculture is multifunctional. It’s not just providing food to surrounding communities, but rather a whole suite of social and environmental benefits,” said study co-author Sara Meerow of Arizona State University.

It’s long been recognized that Detroit has high potential for agricultural development, given its abundant vacant land. By some estimates, Detroit has more than 100,000 vacant lots, and vacant land in the city totals 23 square miles—roughly equivalent in size to Manhattan.

One 2010 study estimated that Detroit has the potential to produce about 75% of its annual vegetable consumption and 40% of its fruit consumption by farming on publicly owned vacant lots using conventional methods.

But empirical research that documents the composition, spatial extent and motivations for urban agriculture in Detroit is relatively scarce. The authors of the new paper say their study addresses many of the knowledge gaps.

“Studies indicate that UA benefits are often localized, and some evidence suggests that it can lead to gentrification, so scaling up will need to be implemented in a manner that does not exacerbate environmental injustice,” the researchers wrote.

The other study author is Mariel Borgman of Michigan State University. The research was funded by the National Science Foundation.