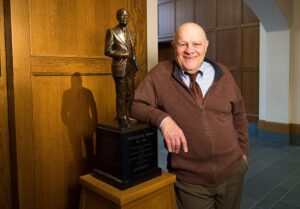 Melvyn Levitsky, professor of international policy and practice at the University of Michigan Ford School of Public Policy, spent 35 years as a U.S. diplomat under eight different presidential administrations. He served as officer-in-charge of U.S.-Soviet bilateral relations and as a political officer at the U.S. Embassy in Moscow.

He weighs in on the U.S. decision to suspend the nuclear treaty with Russia.

What does it mean for the U.S. to suspend the 1987 Intermediate-Range Nuclear Forces Treaty with Russia? What led to the suspension?

Levitsky: INF is a historic arms treaty. For the first time, the treaty was to eliminate a whole class of nuclear weapons (intermediate range) held by the U.S. and the Soviet Union. There are also confidence-building and verification clauses in the treaty.

It was part of President Reagan’s efforts with Gorbachev under the “trust, but verify” rubric and was hailed worldwide, but particularly by our European allies that were within target range of these missiles. Part of the effort was to convince some of our allies to accept intermediate-range missiles on their territory so they could be negotiated away. This was no small feat and required active diplomacy.

The treaty has a clause that allows either party to give six months notice of intention to withdraw. The Trump administration has done this. The primary cause of the withdrawal is the claim, supported by the U.S. and most of Europe, that the Russians have a missile system that violates the terms of the treaty. The Russians have counterclaimed that a U.S. defensive anti-missile system is in violation of INF provisions.

What repercussions can it have not only on U.S.- Russia relations, but internationally?

Levitsky: It’s a blow to arms control and could lead to a new arms race. One element in the mix is that China is not a signatory of the INF Treaty. China’s militarization of islands within their claim of territory in the South China Sea is most likely another motivation for the U.S. to renounce the treaty. That could mean the U.S. would get back into producing these intermediate-range missiles, perhaps adapting cruise missiles for that purpose.

It’s disappointing that the U.S. and Russia were unable—or unwilling—to resolve the problem through diplomacy. That could have had a chance to determine the veracity of the claims that one side or the other was violating the INF Treaty and the possibility, slight though it may be, of extending the treaty by engaging in multilateral negotiations, including China.